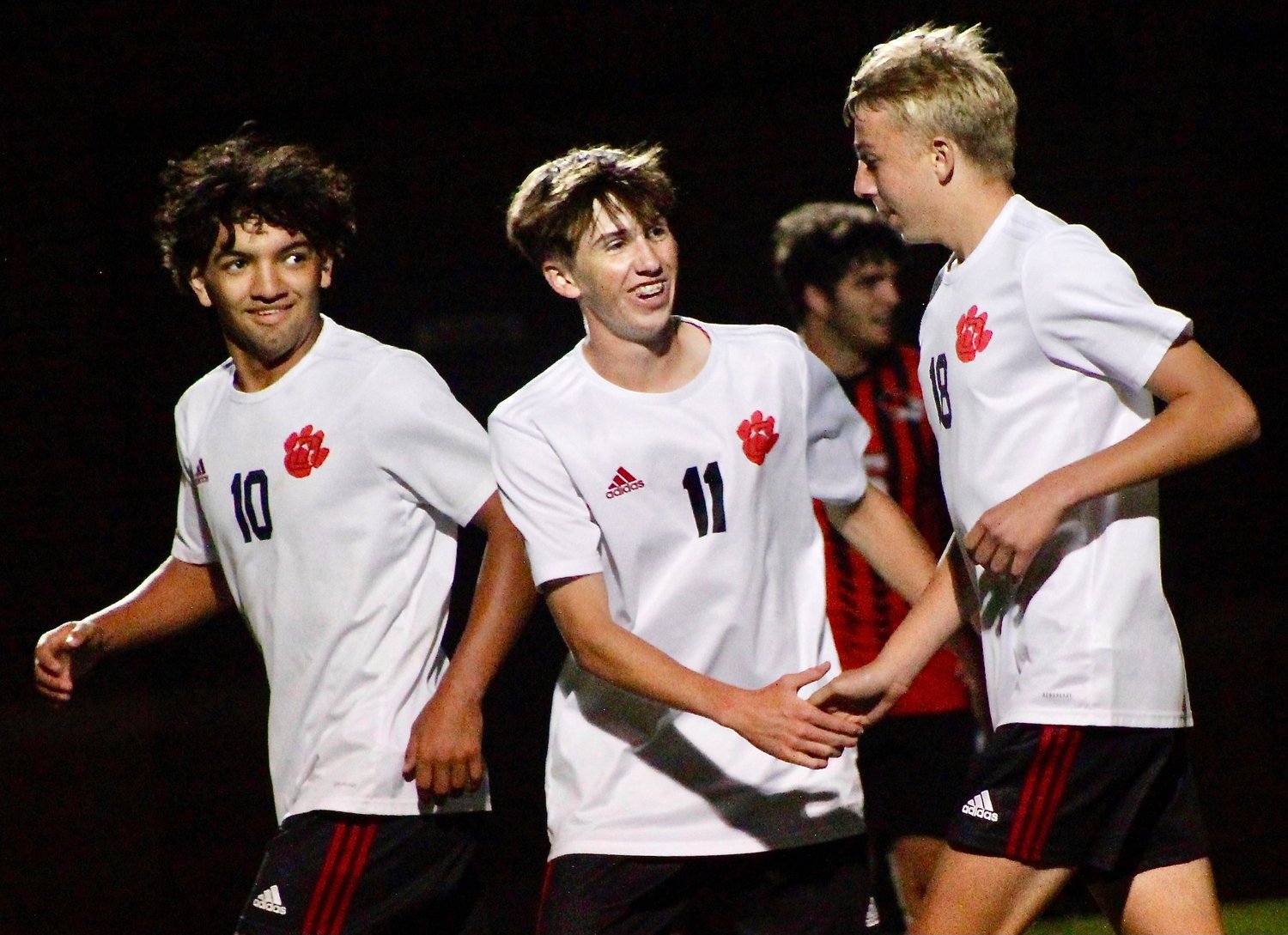 REPUBLIC — With Republic hosting Ozark on its grass field rather than on its turf field Tuesday, Caden McGehee had a hard fall upon getting tangled up with a Republic player.

A thud could be heard when McGehee landed on his back.

No matter, less than a minute later he caused another thud when his right foot deflected a Republic shot on goal.

McGehee’s effort was part of another strong effort by Ozark defenders in a 2-0 victory.

“It hurt my leg more than anything,” McGehee said of falling on his back. “My legs were drained the entire game anyway, so that didn’t make them feel much worse.

"I had to hustle back to support my team," he added. "If you don’t stay with the play, you’re going to get scored on. That was a prime example. It felt good being able to get a hustle play.”

“He sprinted back to make that play,” coach Zack Owens said. “That’s our back line mentality. They don’t quit. They fight every single time and take a lot of pride in not letting people score on them. They take it to heart. That’s something I can’t coach.

“They have been the backbone of our team the entire season,” he added. “We have had such great help from them.”

McGehee and fellow defenders August McComas, Jake Garner and Connor Cummings — all juniors — have answered all questions about how they would respond to their first year starting on the varsity.

“Our defenders work hard and have stepped into their roles really well,” midfielder Caleb Lepant said. “Only two of them played varsity last year and even then they didn’t have much varsity time. For them to step up like they have has been good for the team. They’re only going to get better next year.”

“(McGehee) is always working hard to make sure we don’t get scored on,” midfielder Zach Ulrich said. “The defenders have a lot of respect on the team.”

“If one us gets beat, we have to step in for each other and I feel we’ve done pretty decent with that this year,” McGehee said. ”We haven’t allowed that many goals and I don’t see that many more being scored on us. Nothing is getting past us.”

Ozark (12-3 overall and 6-0 in the COC) has posted two straight shutouts and four on the season.

Owens’ bunch has a one-game lead on the rest of the league after Neosho suffered its first COC loss against Nixa on Tuesday.

Ozark received goals at Republic from Ulrich and Adrian Ortega.

Ulrich is another junior who Owens has been happy to see improve.

“He gives us great minutes,” Owens said. “He scored within a minute of going in. You can’t have much better productivity than that.”

Republic goalkeeper Xavier Ulshafer had several spectacular saves, but Ulrich scored rather easily off on an assist from Ortega.

“I’m just trying to do my job," Ulrich said. "I was right in front of the goal and (Ortega) tapped it to me and I put it in the back of the goal.”