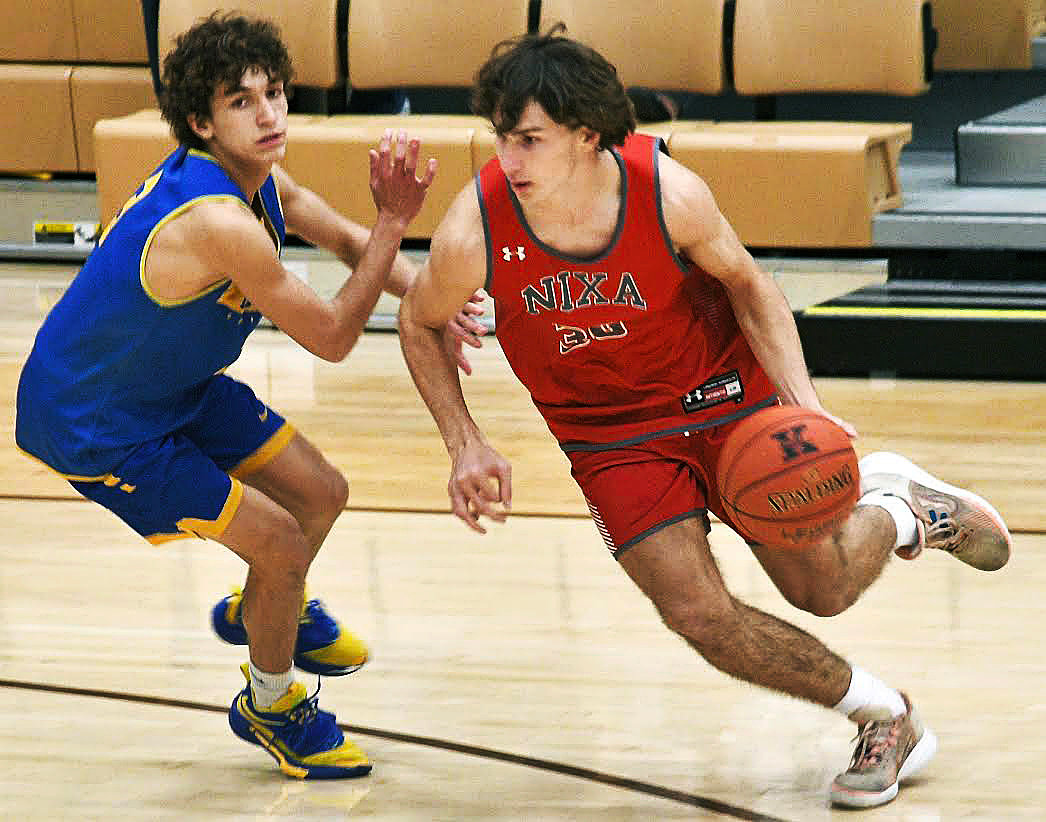 Pre-season banter is pointing to Nixa being in position to average 70 points or more a game this season for the first time in 10 years.

Coach Brock Blansit is preaching that a rapid rate will best fit his personnel and is promoting the Eagles as a fast break waiting to happen.

"We’re planning on playing at a pretty fast pace," Blansit said. "We’re going to get up and down the floor. We have so many guards that it wouldn’t make a lot of sense for us to pass it 27 times.

Blansit has so many guards to work with that Nixa's offense may be four-out, or even five-out.

The Eagles' backcourt that will actually stretch all over the court will include Kael Combs, Josh Peters, Garrett Hines, Corey Kemp and Carsten Steitz. Several underclassmen could be in the mix, as well.

"There are about 10-11 kids fighting for spots to play and we’re so guard-heavy," Blansit said. "There are a lot of times we’re going to be playing five guards."

Much of what Nixa will do offensively willl surely go through Combs. He'll be in his first go-around as a point guard, but is one of the most experienced players around. He's in his fourth year of varsity ball.

Combs averaged 14.5 points a game last season and is a two-time All-COC First-Team selection. He represents the only significant scoring threat coming back from last season's Class 6 state runner-up bunch.

Blansit is looking forward to Hines and Peters tapping into the potential they showed late in games Nixa was winning big last season. They'll be among the Eagles' first scoring options this season.

"Garrett and Josh can really score," Blansit said. "People are going to get to know their names. Garrett is a very good shooter. Josh can shoot, too, and is a good scorer. He can get to the rim and is very athletic. We expect big things out of Josh."

Kemp can be a slasher and Steitz is a perimeter shooting threat whose stock is on the rise.

"Carsten had a great summer and has improved so much," Blansit said.

Keep an eye out for sophomore guard Jaise Combs. Jaise and Kael are brothers.

Nixa's post players are Daniel McCoy and Jackson Cantwell. They're quite a contrast, with McCoy being a 6-foot-4 senior and Cantwell a 6-8 freshman.

"He’s going to play some varsity minutes. We’ll see at what point in the season that happens," Blansit said. "He’ll definitely have opportunities to play. For as big as he is, he moves extremely well and is a good rebounder. You can’t teach someone to be 6-foot-8. If you’re that big and can rebound, that’s really all we will need out of a post player."

Blansit won't be asking McCoy and Cantwell to put up big numbers offensively.

However, Blansit will be counting on McCoy and Cantwell to get to their share of rebounds and perhaps even more.

If there's an area that looms as a question mark for Nixa it is rebounding.

"Rebounding is something we’re going to have to concentrate on because we want to play at such a fast pace," Blansit said. "Sometimes, the ball can be shot and they’re all wanting to run to the other end of the court and score so fast. We can't forget we have to get the ball first."

It will be interesting to see if any area teams take a cue from Nixa's troubles handling Christian Brothers College's full-court pressure in last season's Class 6 state final. The Eagles committed 21 turnovers.

Of course, no one in southwest Missouri has the athletes and size CBC had. But any area coach who has been dominated by Nixa in recent years wouldn't be faulted for giving a press a try against the Eagles.

"It’s something you can learn from," Blansit said of Nixa's troubles against CBC's press. "It’s something you’ve got to get better at in the off-season. If teams do (press), that’s fine and if they do, we’re going to have to handle it. If we don’t, we’ll have to improve."

For all of Nixa's success the past three seasons, the Eagles claimed only one regular-season tournament title, winning the Carthage Tournament championship two years ago. This season, Nixa will play in four tournaments, up from three.

The Eagles open at the Willard Classic Nov. 30-Dec. 3 and the following weekend will be at the Liberty Tournament.

The Willard Classic field could produce intriguing matchups against Springfield Central, Harrison (Arkansas) or Bolivar. The Liberty Tournament field has a proven power in Bashor-Linwood (Kansas) and a Park Hill team with high expectations.

"Our schedule is brutal. It will be a challenge," Blansit said. "There could be a little bit of a learning curve the first couple of weeks.

"Bolivar is good every year and Central is going to be one of the top four or five teams in our area," Blansit said. "At the Liberty Tournament, Bashor-Linwood is one of the top teams in Kansas every season. Park Hill has everyone back from last year. It will be tough to win two games in that tournament, let alone three."

Blansit warns fans to look out when Nixa and Central face off. They are scheduled to meet Dec. 20 and also could play each other in two tournaments.