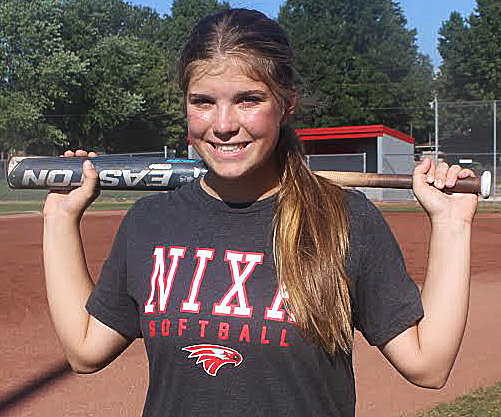 An aspiring nurse, Sara Sweaney has been working since February as a unit assistant, or candy striper if you will, at Cox Medical Center South in Springfield.

"I've always been passionate about helping others when it comes to medical care," Sweaney said. "I get assigned at work to a new floor every day and they tell me the needs for that floor. I didn't want to go to nursing school having never been to a hospital before. It's nice now that I know where everything is, what needs to get done, how patients are and what I need to do."

Sweaney has also been learning on the job as Nixa's first baseman for two-plus seasons. She's progressed exceptionally well, enough so to be looked upon as the Lady Eagles' top hitter this season.

Sweaney enters this week with a .437 batting average, seven home runs and 27 RBIs. She leads Nixa in all three categories.

She has hit safely in all but two games and had a 17-game hitting streak.

"I've been meeting my goals, it's been fun," she said.

Sweaney's top priority as a hitter entering this season was to hike her batting average. She hit .311 as a freshman and .278 as a sophomore.

She carried a big bat last year, supplying seven home runs and 31 RBIs, but wasn't happy with her consistency.

"Last year, I considered myself a home run hitter more than anything," Sweaney said. "If I hit the ball hard, it usually went over. Seven home runs was good, but my batting average wasn't impressive. This year, I've focused on getting a base hit. I try to tell myself that home runs are accidents, that I should be hitting line drives and hard ground balls every time. If it happens to go over, it goes over.

"Going 1-for-4 with a homer is not as good for me as going 3-for-4 with no home runs," she added. "I would rather have multiple hits than one home run. I want to keep my momentum going. It's been working well. I've been hitting more consistently."

"She's been hitting a lot of line drives," coach Matt Walker said. "She's done a good job not trying to pull everything and going with pitches. Most of her home runs have been straight up the middle. She's been carrying us."

Sweaney has kept herself from going for home runs even after starting this season with two home runs against Kickapoo.

Sweaney has also made the adjustment from hitting sixth or seventh in Nixa's lineup last year to batting cleanup for most of this season. She's emerged from an under-the-radar type to the focal point of opposing scouting reports on the Lady Eagles, or at least she should be.

"I kind of liked hitting sixth or seventh because (opposing pitchers) weren't expecting me to do well," she said. "They've been more selective than they were to me last year. I got a lot of fast balls last year. Hitting fourth, I still love it and it's what I'm used to in travel ball, but what they've thrown me are pitches that are harder for me to get to. I'm trying to prove myself and show people I'm here to play."