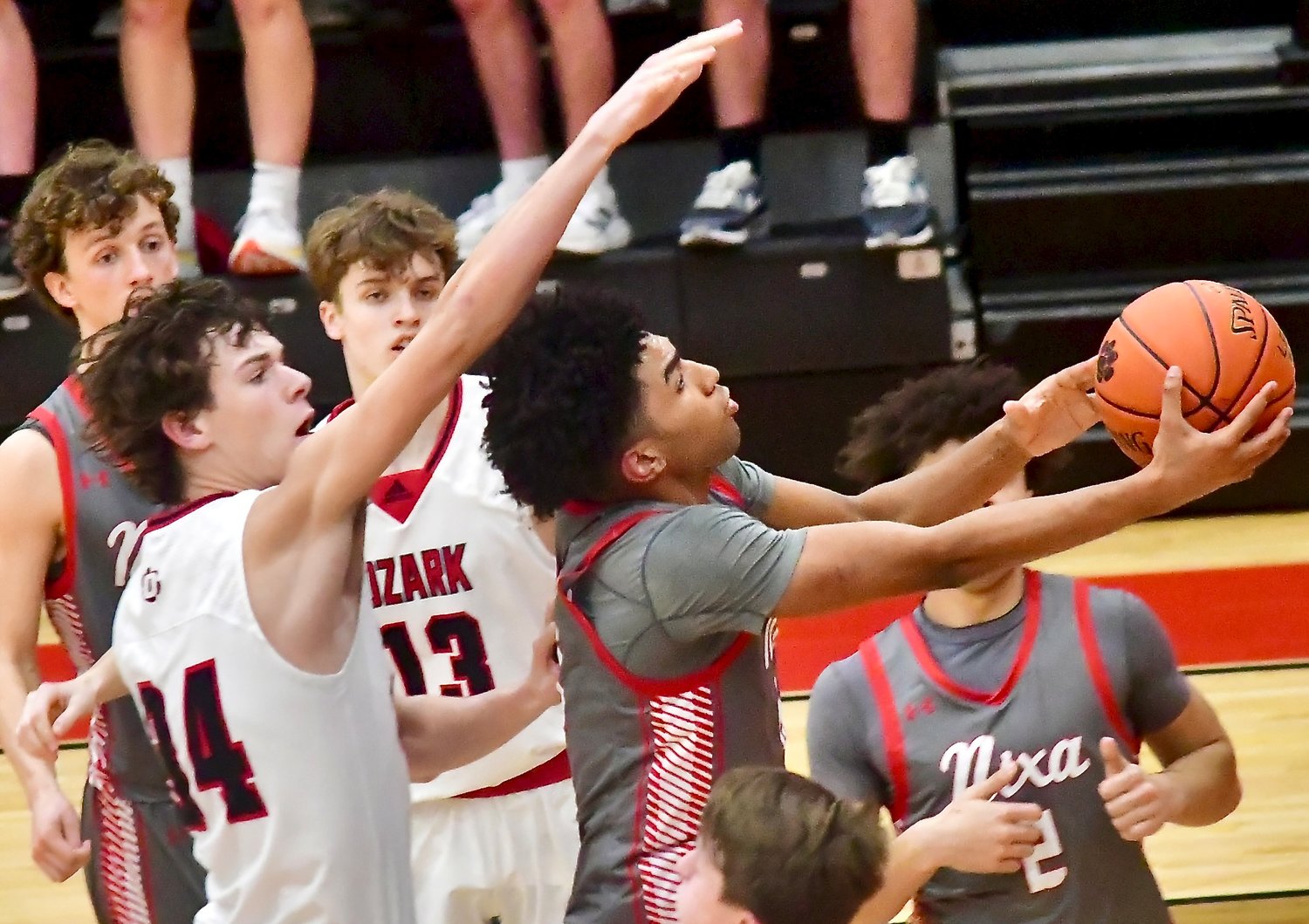 NIXA'S KAEL COMBS and the Eagles are off to a 15-0 start.
PAT DAILEY/HEADLINER NEWS
Posted Wednesday, January 25, 2023 12:00 am
PAT DAILEY Sports Editor patd@ccheadliner.com

We are eight-plus weeks into this hoops season and Nixa’s boys are one of only six unbeatens statewide and one of only two undefeated Class 6 teams.

The Eagles are 15-0 and ranked No. 2 in Class 6 in the latest Missouri Basketball Coaches Association Poll entering this week’s Nixa Tournament. Kirkwood (13-0) is No. 8 in Class 6.

Nixa meets Marquette in the first round. Last season, the Eagles played five games against Catholic schools, this will be their first such matchup this season.

Nixa will have nine of its next 10 games at home. That includes a date next Wednesday against Kickapoo, a matchup that was re-scheduled due to Tuesday’s snow.

— Republic (15-1) is 15-0 against in-state competition. The Tigers’ lone loss came at the hands of Springdale, Arkansas.

— Former Nixa coach Jay Osborne has led Springfield Catholic from the doldrums to the .500 mark. The Irish started 1-6, but are now 9-9.

When’s the last time all five Springfield public schools teams finished with a winning record? It’s been at least 14 years. They gave it a good try in the 2008-2009 season, when Central was 21-2, Kickapoo won 17 and Hillcrest and Glendale both won 16, but Parkview was 7-18.

— This week’s Sparta Tournament field includes the host Trojans, Mansfield, Fair Grove, Greenwood, Gainesville and Ava. Mansfield is 8-0 against teams with a winning record. Only four of the Lions’ games have been decided by 10 points or less. Ava has went from 24-4 last season to 2-13 this winter.

Marionville, which beat the Trojans in overtime, is 16-2, but not ranked in Class 2. It says here the Comets will beat Ash Grove when the teams meet in a couple weeks.

Sparta will meet Class 3 No. 9 Greenwood in a semifinal Thursday. The winner will get either Class 3 No. 3 Mansfield or Fair Grove.

— Ozark (6-12) arguably has had the most difficult schedule in all of SWMO. The Tigers have faced 13 teams with a winning record and it will be 14 Friday, when they travel to Glendale.

— Remarkably, this late in the season, Glendale has played 11 out-of-state teams, compared to only six in-state foes. The Falcons made a trip to California to play in the San Pedro Shootout and faced four Los Angeles-area teams. They have also met three Kansas teams, two Arkansas teams, one Oklahoma team and one Texas team.

— Joplin (9-7) is 2-3 in games decided by two points or less. Three of the Eagles' last five games have been decided by a bucket.