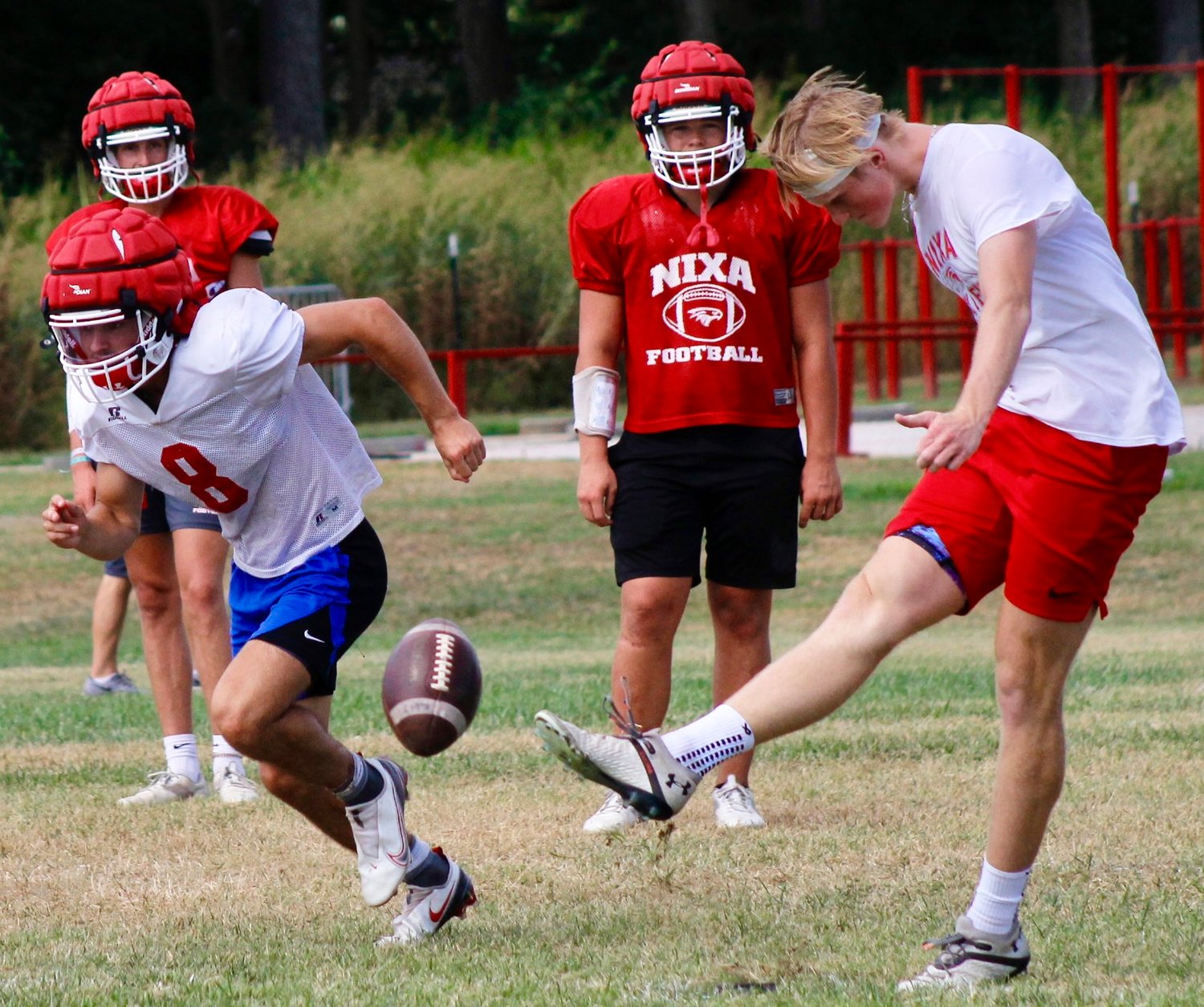 Kaleb James was a late arrival to the gridiron, having grown up with a focus on soccer.

But since putting his toe to the pigskin for the first time as a sophomore for Nixa two years ago, he has devoted as much time to his craft as any of the Eagles.

Even while doubling as a defender for Nixa’s soccer team, James has practiced his punting and kicking almost on a daily basis.

“I would say I've given pretty much everything I got to it,” James said. “I train six to seven days a week, which probably isn't the healthiest. But I try to make my recovery good enough.

“Everything I do is for kicking. I watch YouTube videos to try to perfect my craft,” he added.

James tried out for track and competed in the hurdles for the first time this past spring largely with the hopes it would help his kicking and punting.

“I figured I should run track to help my leg speed, which will help me hit bigger balls,” he said. “Also, if I'm being honest, I kind of just got bored. I got to make so many new friends in track. They're different people, going from football, soccer and basketball. You have a huge variety. There are super smart kids out there who are crazy track athletes.”

Likewise, James has become familiar with the country’s elite kicking and punting prospects. He has become a regular at the highly-acclaimed Kohl’s Kicking Camps.

He ventured to Tennessee last month for the Kohl’s National Scholarship Camp. He also attended the Kohl’s Texas Showcase Camp and the Kohl’s Future Stars Event this year. He took part in the Kohl’s Winter Showcase last year.

“It's been a crazy experience, going up against some people who are going to power-fives,” James said, referring to NCAA D-I’s power-five conferences. “They're the best in the country. I'm meeting people from all over the country. I have a really good friend who has committed to Georgia. it's weird that someone I know is actually going to be playing for one of the greatest teams in the country. I can't wait to watch them on TV.”

“Drew is a different breed of punter. He's a beast and a half,” James said. “He’s hitting 60-yard balls that have five-second hangs. He's unreal. (Miller and Dooley) are on a different level compared to everyone else.”

James has also made the rounds at various colleges, including Missouri State and Arkansas State.

James has been ranked as high as No. 17 among punters in the nation by Kohl’s.

At the Kohl’s National Showcase Camp, he posted a 54-yard punt with a 4.6 hang time.

James got off a 58-yard punt last season at Neosho and converted on a 44-yard field goal at Joplin.

He considers punting to be more of his niche.

“I'm built more like a punter than a kicker and punting has come naturally to me. It's been a natural gift,” he said. “With everything I've learned, you can fix one thing and it could take you to the next level. There's so much improvement you can make in a year. The sky's the limit.

“I'm looking forward to having a great season, especially on the punting end,” he added. “We don't really kick too many field-goals, but I'm hoping to do my job whenever it comes down to it.”