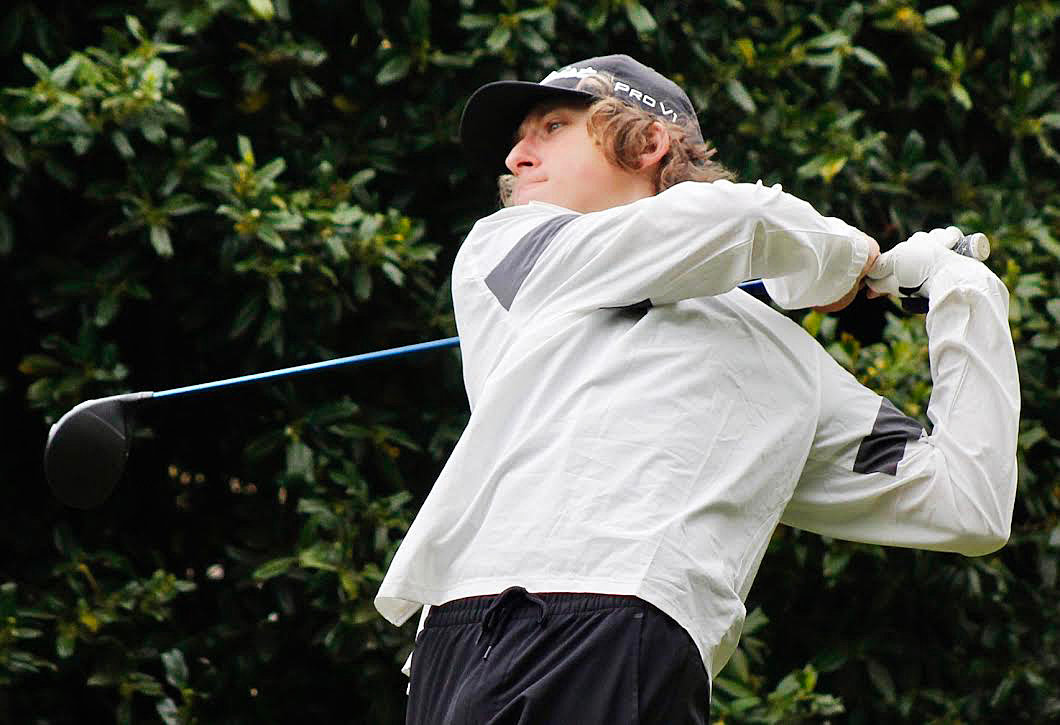 BRANSON — Noah Naugle has done well by playing his own game this season and not concerning himself with the play of competitors he’s paired with.

With Nixa coach Jeff Lotz drawing names out of a hat to determine his Nos. 1-5 players, Naugle has found himself alongside the elite one day and the not-so-elite the next.

“Sometimes, it's best not to watch,” Naugle quipped regarding playing with the latter.

It was painfully hard to watch the final few holes of Naugle’s round at the COC Tournament play out last week at Pointe Royale Golf Course. He went from holding a two-shot lead entering the 16th hole to finishing one stroke behind eventual medalist Harry Satterlee, of Joplin.

Satterlee completed his round about 30 minutes earlier than Naugle did. A two-time COC champion, Satterlee birdied 18. Naugle was in position to birdie 18, as well.

Naugle’s day started and ended badly. But he made quite the charge in between, a stretch that included birdies on 10, 13 and 14.

“I stayed patient and knew I could play better on the back (nine),” he said.

Looking ahead to the post-season, Naugle is looking forward to putting together peak performances.

“I don't think I've played my best this season,” he said. “Hopefully I can heat up at Districts and State.”

Although Naugle had to settle for a tie for second individually, his 74 led Nixa to the COC team championship. Nixa totaled a 307, with Chandler Burch posting a 75 and Jacob Hatman and Johnathan Miller both shooting a 79.

Burch returned to Pointe Royale for the first time since shooting a 31 on the front nine during a double-dual last month.

Burch, who had a 38 on the front nine this time around, knew beforehand it was going to be extremely difficult to even approach his 31.

The lowest score for anyone on the front nine at the COC Tournament was a 34.

“The greens were aerated (last month), so they were definitely a lot slower,” Burch said. “The greens today were a little tricky. There was a lot more play in the greens. I was prepared for it. 75 not a bad score, I'll take it.

“Overall, I was hitting my shots and hitting my lines on my putts,” he added. “I lipped out a few putts. I had a couple five-footers not drop. I was reading the greens fine, I just had a few unlucky lip-outs, it happens.”

“I hit my second shot left of the green and chunked the next shot,” Burch said. “I didn't have the greatest of lies, but I can't blame it on that. I just didn't pick it clean.”

Ozark’s 317 total included a 76 from Carter Chronister, a 77 from CJ Jackson, an 81 from Kyler Smith and an 83 from Kyle Fitzpatrick.

“I had a couple birdie putts I missed, 10 feet was the longest one,” Jackson said. “The greens were unbelievably fast, the fastest greens we've played this year.”