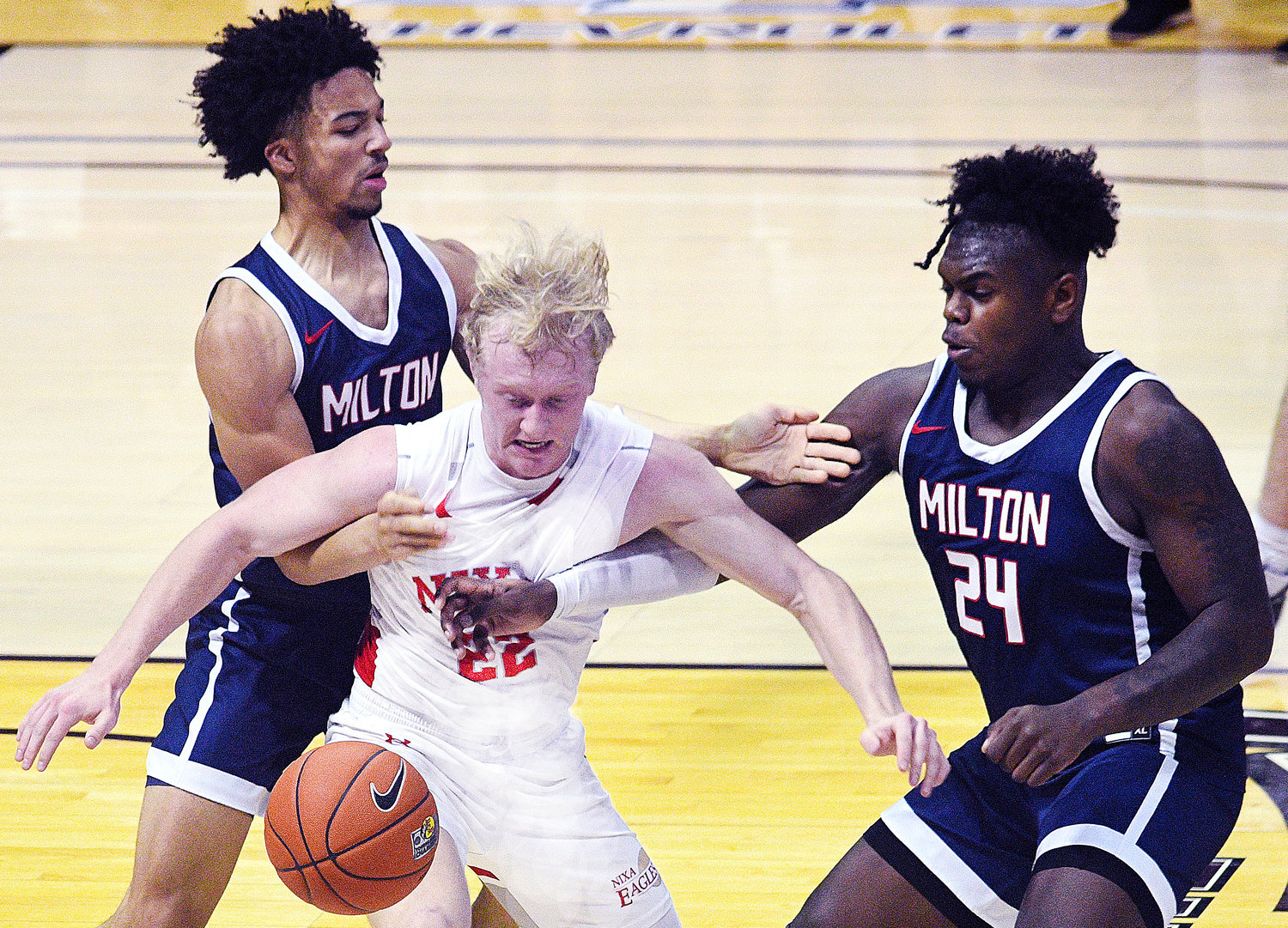 SPRINGFIELD — As well as Colin Ruffin has played in Nixa’s two losses, the Eagles guard can’t help but lament over plays that haven’t gone his way in the final minute of both games.

Milton (Georgia) and Bruce Thornton experienced the thrill of victory in a 50-49 triumph over Nixa at the Bass Pro Shops Tournament Of Champions on Thursday. Thornton drilled a game-winning 3-pointer at the buzzer.

Ruffin and Nixa endured the agony of defeat at JQH Arena for the second time in less than three weeks.

Ruffin anguished about being called for traveling with :25 remaining and Nixa leading 49-47.

“We should have won that game, if I hadn’t traveled,” said Ruffin, who actually played like the best player on the floor with a game-high 21 points, to go along with seven rebounds. “This game is probably my fault. I take fault for it.”

Ruffin had the ball near mid-court when he picked up his dribble as two Milton defenders converged on him. While leaning forward and looking for a teammate to pass the ball to, Ruffin couldn’t find an open man, lifted his back foot and was whistled for traveling.

It was Nixa’s 19th turnover on the night. Milton had just nine giveaways.

“It was a play in which I had my momentum (going forward) and I couldn’t stop because they came with a double(-team),” Ruffin said. “I should have split them.”

At the Blue & Gold Tournament last month, Nixa lost to Catholic 49-48. Ruffin led an Eagles comeback with 23 points, but missed a jumper at the buzzer.

Nixa had more than its share of missed free throws in both losses. After shooting 12-of-25 from the foul line against Catholic, Nixa was 13-of-22 on freebies versus Milton.

“We didn’t shoot as badly as the last time we lost in this gym,” Ruffin said of Nixa’s free-throw shooting. “But we need to work on them obviously."

“It might be the fans being in back, so (the basket) might look further away than it is,” said Nixa’s Kael Combs, who had 12 points, five rebounds and three steals. “I can’t really put a finger on it. We usually don’t play good here.”

Milton took advantage of two missed free throws by Jaret Nelson with :05 left, as Kanaan Carlyle dribbled downcourt, stopped at the top of the key and turned around to feed Thornton the ball. With an open look at the basket, Thornton swished his buzzer-beater.

“Take away our turnovers and if we make free throws and guard a little better, that doesn’t happen,” Ruffin said.

“Except for the turnovers and free throws, I feel we played an all right game,” Combs said. “I think we should have won, but give props to them. Some of our turnovers were unforced, but sometimes they made us play more up-tempo than we wanted to. They got under us a little bit and caused some turnovers.”

“I thought our zone looked really good,” coach Jay Osborne said. “We did a nice job rotating in it and we rebounded better out of it than I anticipated.”

Ruffin more than held his own against Thornton, an Ohio State signee and Carlyle, a Stanford commit. Like Ruffin, Thornton had 21 points. Carlyle was 2-for-12 shooting with four turnovers and six steals.

“(Ruffin) kept us in the game,” Osborne said. “He did some nice things. He got to the rim multiple times and knocked down free throws.”

Osborne noted 12 of Nixa’s 19 turnovers came in the second half.

“We had eight or nine (turnovers) in the third quarter, when we had a chance to expand our lead and take control,” Osborne said. “Turnovers are killers. That was one of our (points of) emphasis. We were a little nonchalant, lazy with some of our passes and they picked them off.

“This is a hard one,” he added. “You don’t get to play people like this very often and you have to take advantage of that. We had a missed opportunity tonight. This is a huge disappointment.”

Nixa was able to take some consolation by being paired against Catholic in a consolation contest tonight at 6.

“I didn’t really want to play Catholic,” Combs said. “I wanted to move on to the right of the bracket. But I’m glad we can get revenge on them.”