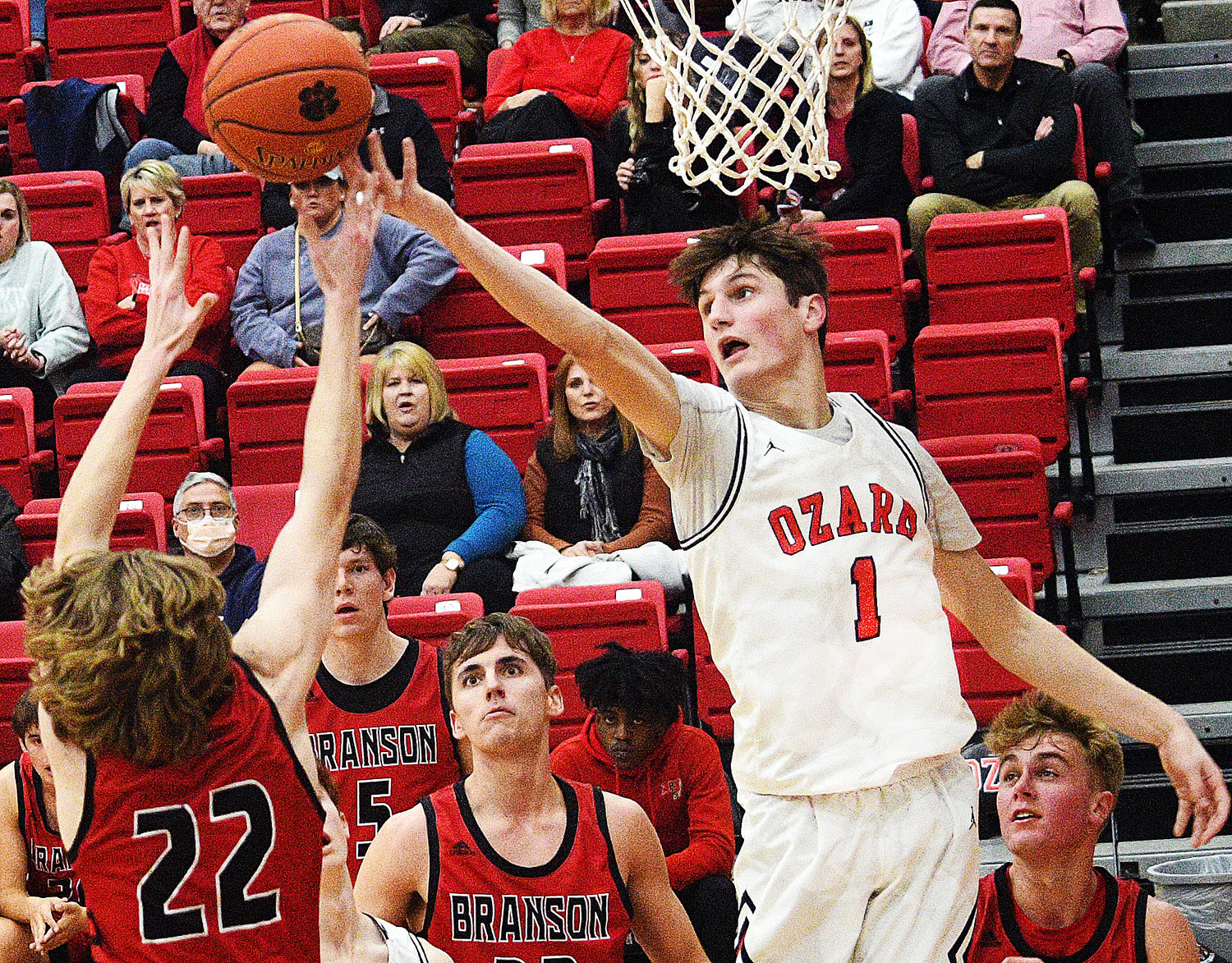 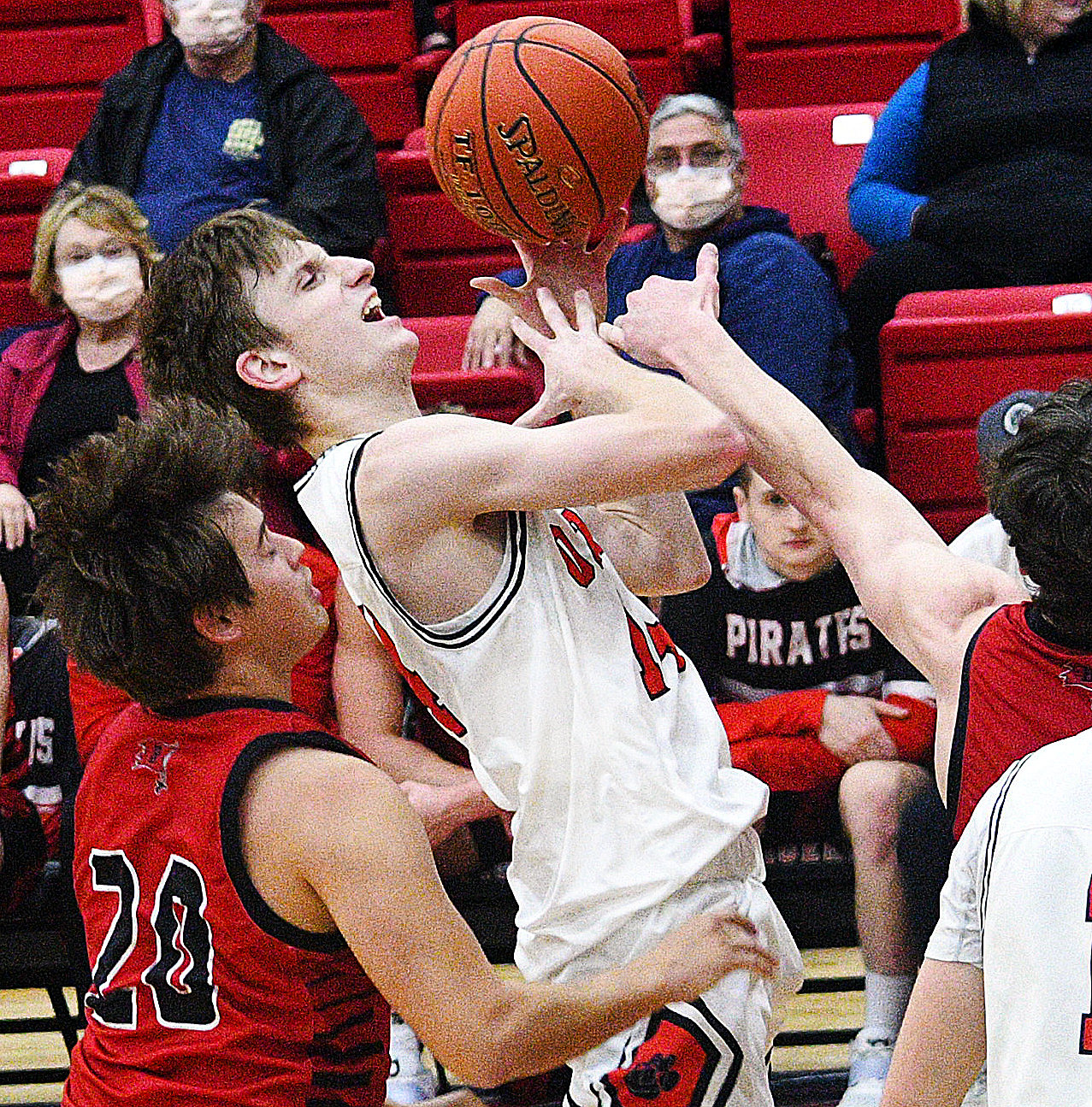 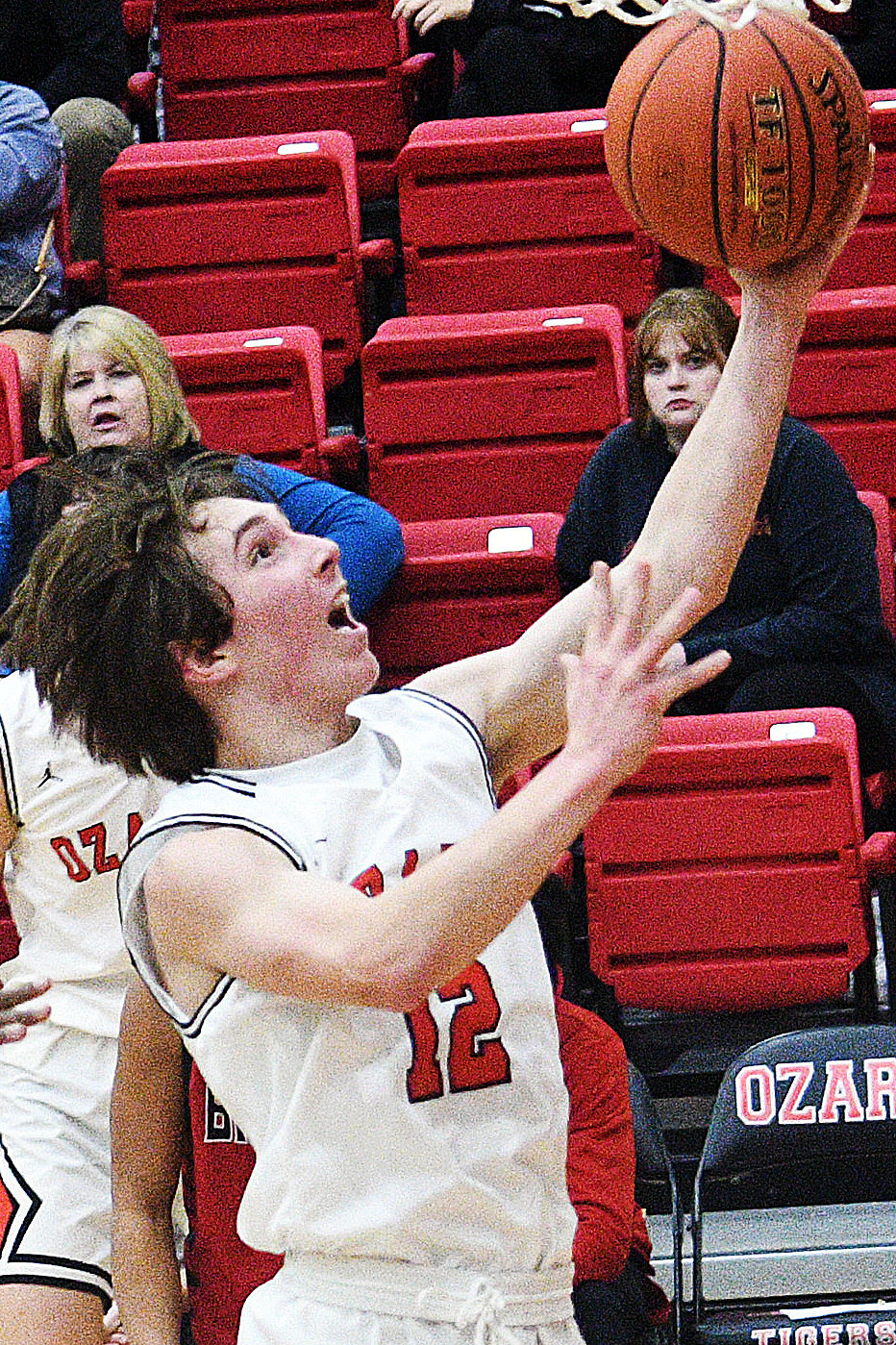 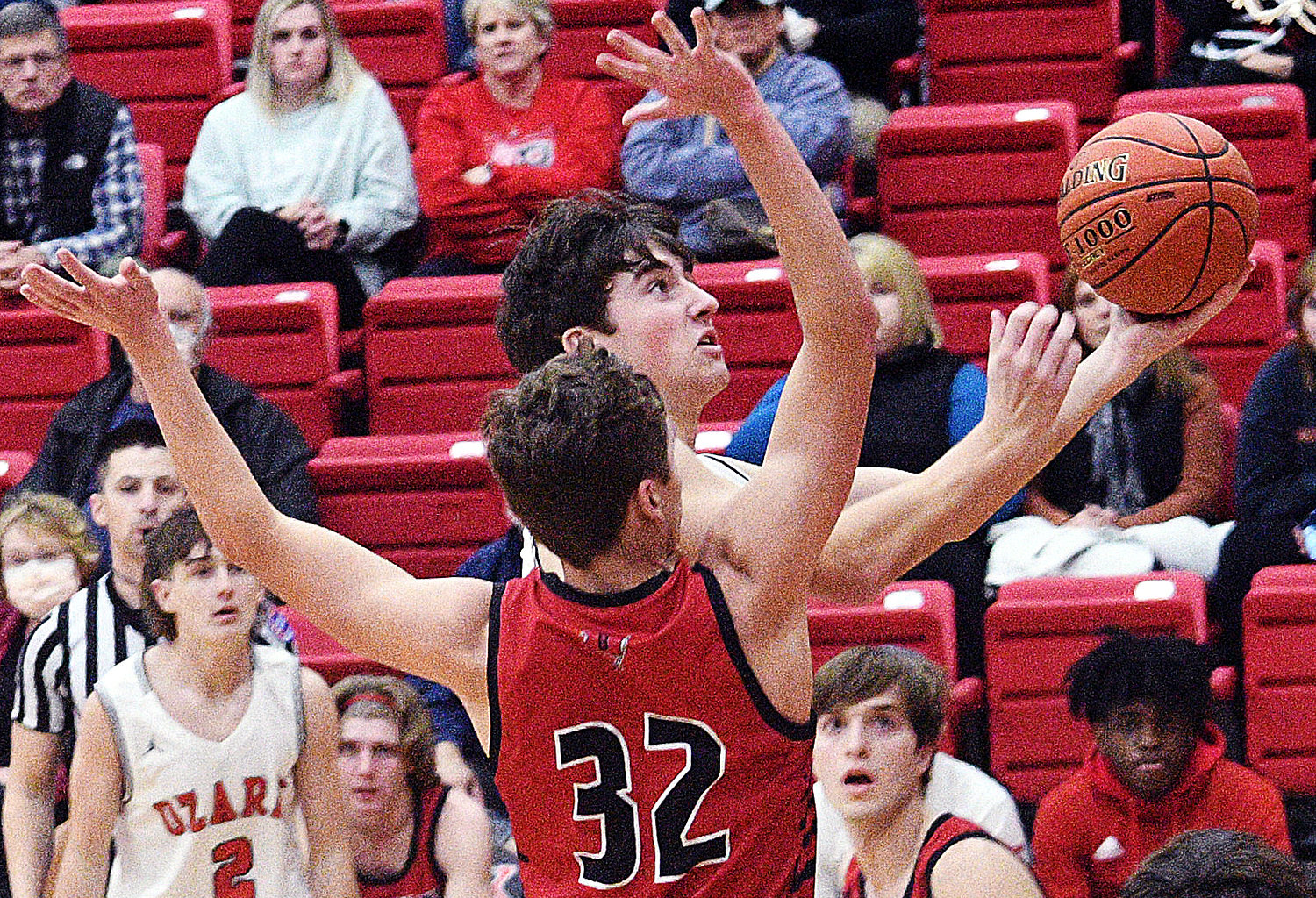 GREYDON MILLER drives to the hoop for a layup.
PAT DAILEY/Headliner News 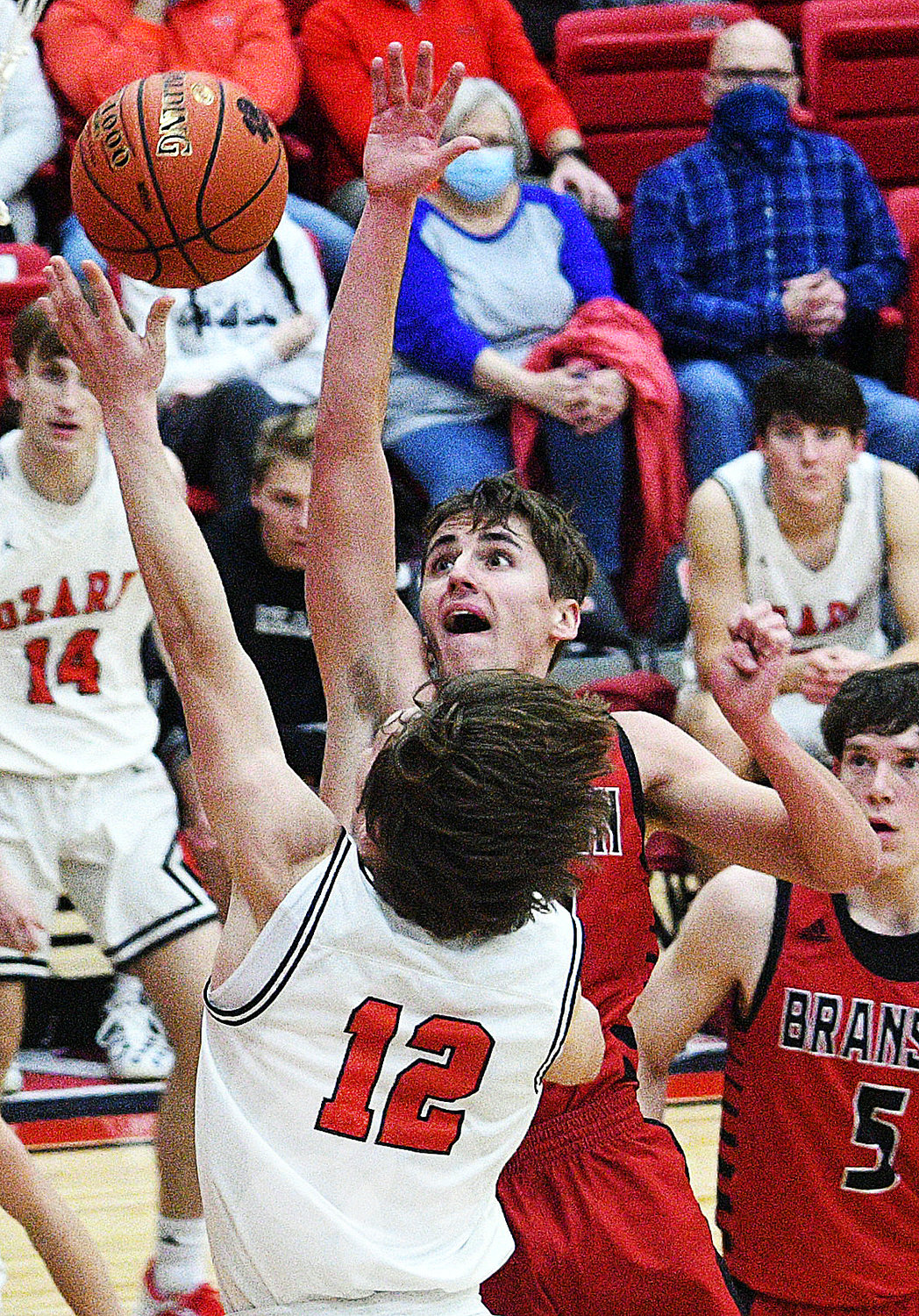 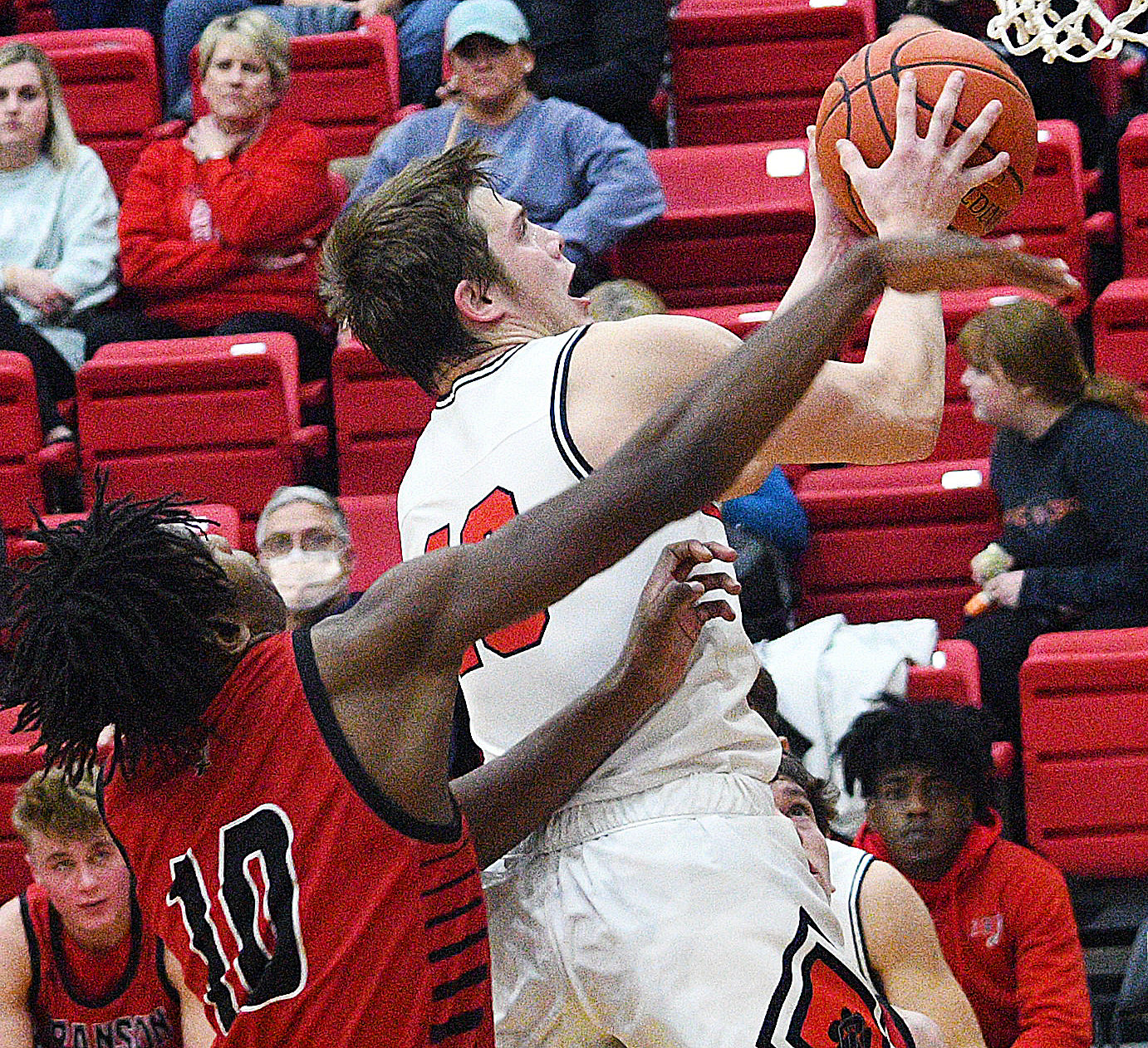 TYLER HARMON is fouled on his way to the basket.
PAT DAILEY/Headliner News 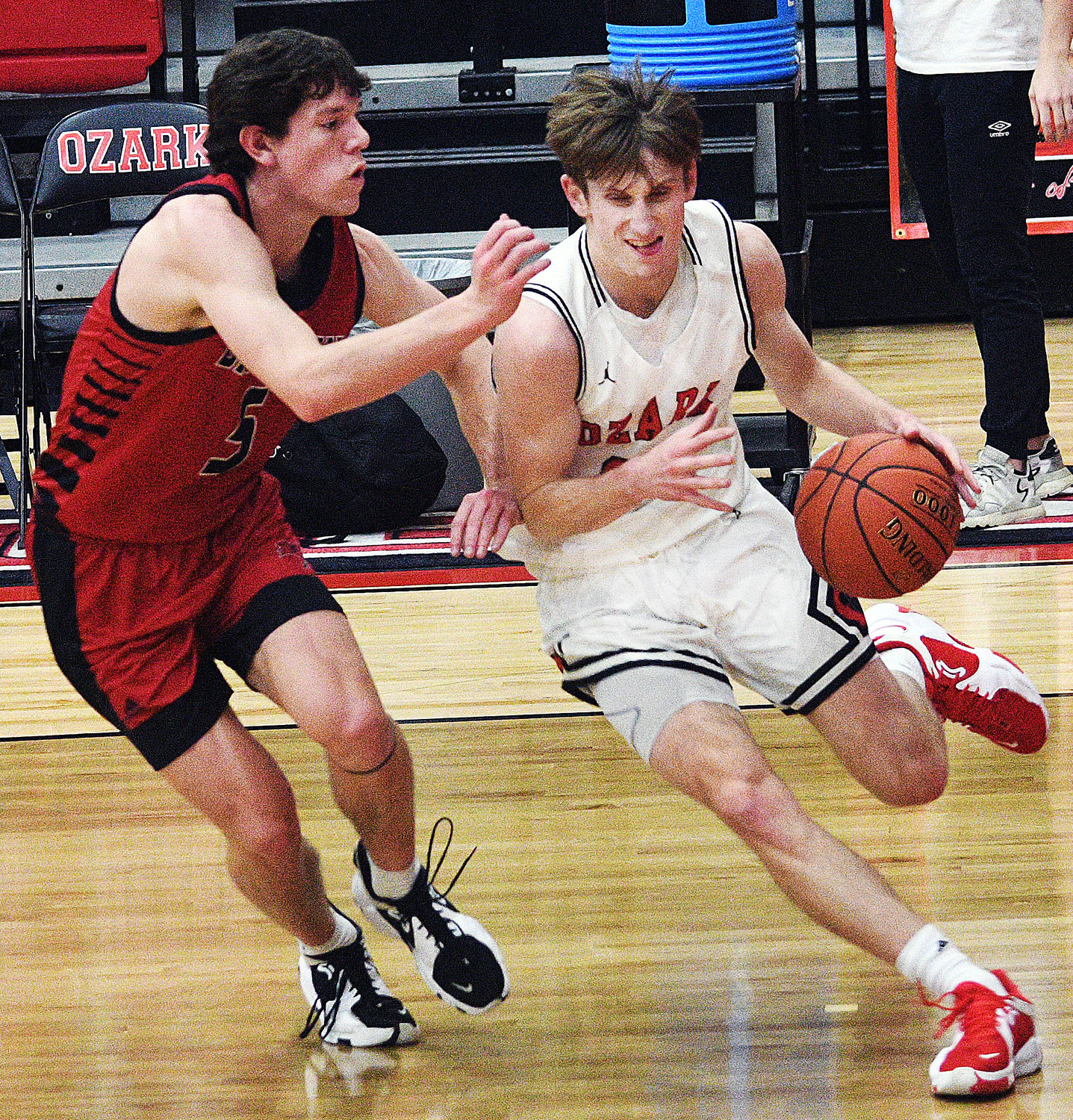 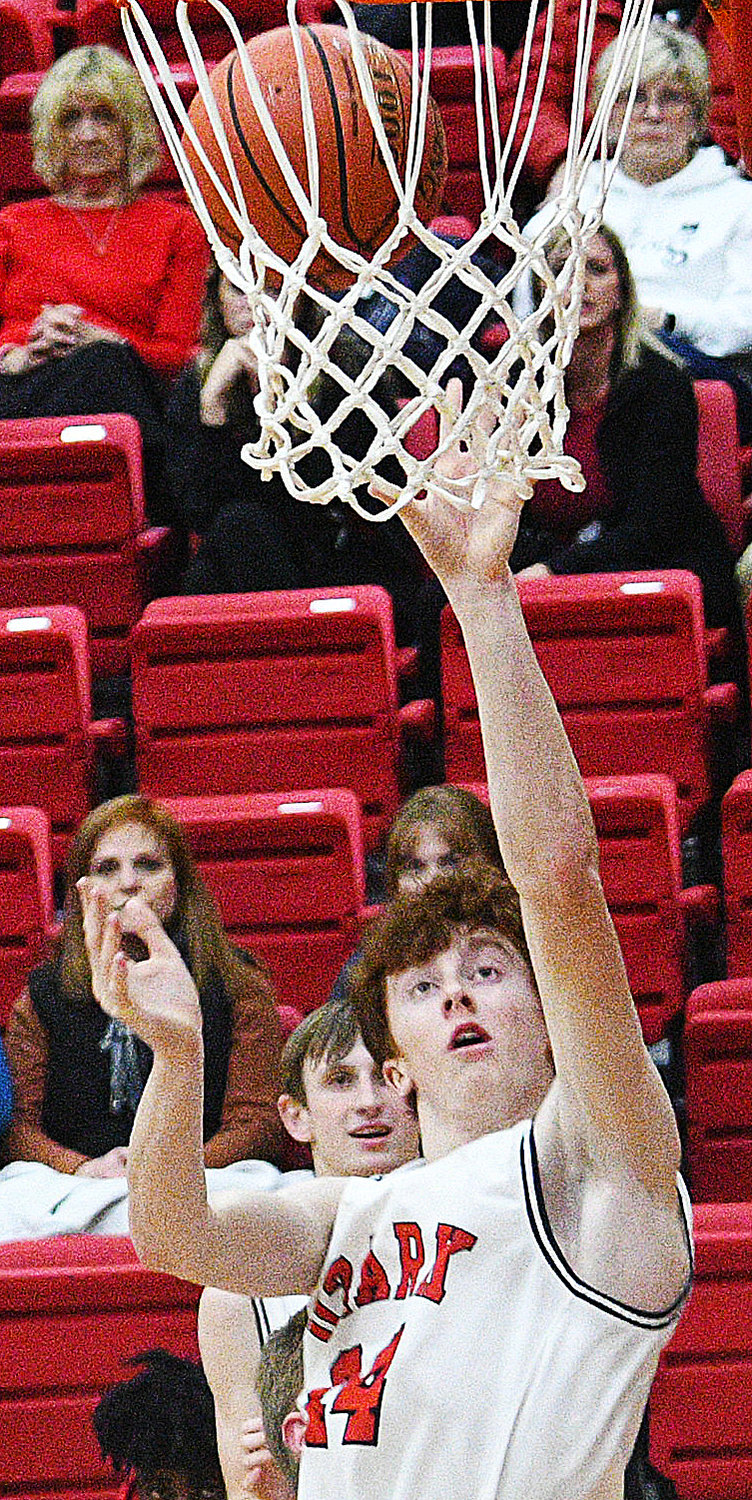 DEVYN WRIGHT follows through on a jumper.
PAT DAILEY/Headliner News 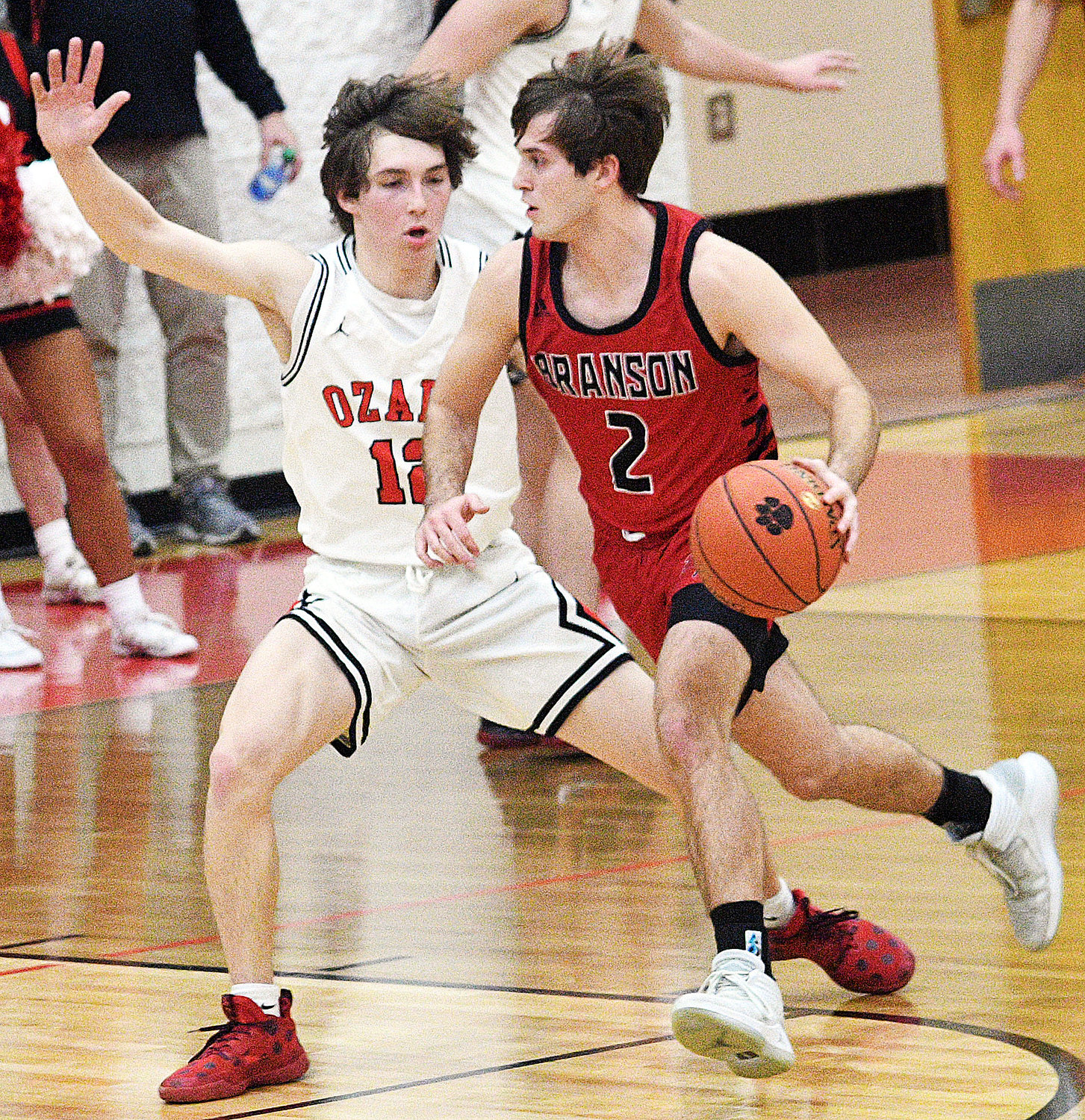 It was essentially Ethan trying to get even with Ethan during an entertaining stretch between two former AAU teammates in Tuesday’s Branson-Ozark COC matchup.

Meanwhile, Branson’s Ethan Jones made a bid to steal the spotlight from Whatley by putting up 15 points over the first five minutes of the third quarter.

Whatley and Ozark owned the game from the outset to the finish. The Tigers were already leading by 20 points by halftime.

Ozark doubled up Branson 40-20 in the first half.

“Our defense was pretty solid,” Tigers coach Mark Schweitzer said. “Ethan Jones got really hot in the third quarter and was hitting jumpers. What are you going to do, we wanted him to take contested jumpers. But he was knocking them down.

“I was proud of our defensive effort,” he added. “When we got done with the Blue & Gold (Tournament), I started in on some little things with our man-to-man defense. That led to tonight. I’m excited because I think our defense can get better.”

Ozark (11-5) opened COC play with a win versus Branson for the fourth straight season and the Tigers have won eight in a row overall versus the Pirates (5-7).

This was actually an anticipated matchup, with both teams featuring a slew of seniors and both Ozark-Branson contests last season were competitive.

Schweitzer was pleased with his team’s intensity, after not being happy with a mediocre practice Monday.

“We didn’t practice or prepare well in terms of the effort I expect,” he said. “I challenged the kids before the game and I think they did a great job of rising to that challenge. We’ll work on the preparation and daily consistency for how to prepare at this level. Every game in the COC can be a loss. You never know which loss may stop you from contending for the COC championship.”

Offensively, Ozark’s 40 first-half points ranks as one of the Tigers’ most explosive halves all season.

Whatley needed just one 3-pointer to get to 28 points, as he repeatedly scored around the rim.

“What can you say, he’s playing really well right now,” Schweitzer said. “When he scored his 20th point, I looked at our staff and said, ‘Man, I didn’t know he was even close to 20.’ He’s sneaky. When he’s playing efficiently on offense, we’re pretty stinkin’ good because that means he’s getting run-outs, cuts to the basket and is hitting jumpers. He did a little of everything tonight.”

About the only thing Whatley didn’t do and has yet to do during his Ozark career is score on a dunk. He had an opportunity to do so upon receiving an in-bounds pass from Tyler Harmon while he was airborne in front of the Tigers’ basket. Alas, he settled for a layup.

“I felt like you were mid-forearm (above the rim),” Schweitzer said with Whatley standing next to him. “I did want him to dunk that. I think the pass was maybe a little too far away from the basket, although I know Harmon is not going to like it if you quote me on that.”

That’s been Whatley’s standard answer when teammates implore him to dunk.

“I tell my teammates when I don’t dunk that a layup and a dunk are both worth the same amount of points,” he said. “I’d rather take the two points. We may be up by only six or seven points, so if I (miss a) dunk, the other team can get the ball and go down and score. That’s a four- or five-point swing. I don’t want to risk it. I’d rather just lay it up.” 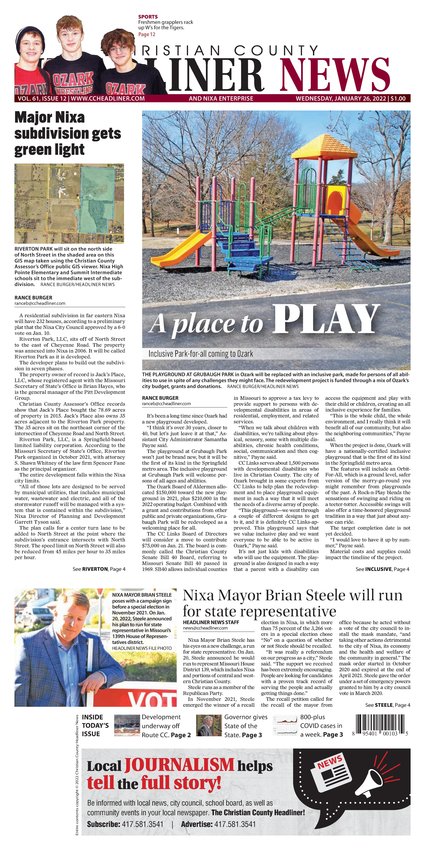