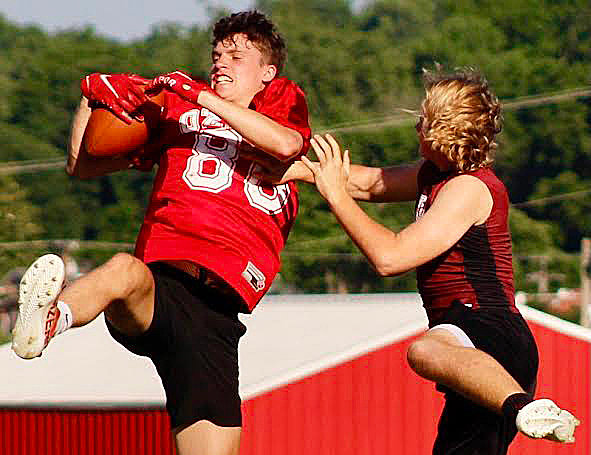 Garrett Ballard landed a summer job working at The Vineyard. His gig at the restaurant perhaps has helped him add to his 6-foot-1, 160-pound frame in preparation for his senior season for Ozark.

“With my metabolism, I’ve always struggled putting on weight,” Ballard said. “But I’ve put on 10 pounds since the end of basketball season. That's something I focused on, putting on some size. Being a safety, I have to make tackles against some bigger guys at running back.”

Ballard proved himself up to that challenge last year. He took on hard-charging running backs in the open field often on his way to a team-high 81.5 tackles that included 65 solo stops. That’s an average of more than six solo tackles a game.

He also topped the Tigers with five interceptions on his way to an All-COC Third Team selection.

Following his breakthrough season, Ballard’s mindset this summer is much different than it was a year ago at this time.

“Last year gave me the confidence I needed,” he said. “Last year, I was kind of new at (safety). I didn't know what to expect. By the end of the year, though, I felt like I was doing great. This summer, with a year of experience, I'm feeling confident and ready for the season.”

“Yeah, I would expect a little bit more respect, probably,” Ballard said. “But teams are still going to play their game. If they throw it, I'm going to be ready for it.”

To that end, Ballard will at times be allowed by Ozark coaches to roam the field and be a playmaker.

“They’re kind of giving me some more freedom where I can run around and go attack the ball,” he said. “I’m looking forward to that. As a safety, you've got to get to the ball quick. I think I’m decent fast.”

Ballard is also a guard on Ozark’s basketball team and a triple-jumper on the Tigers’ track team. Thus, his summer has been spent on the gridiron and the hardwood, after he was on the track all spring.

“We've had (basketball) shootouts and AAU ball traveling all over the country,” he said. “My summer has been pretty packed. It's fun, but at the same time it's a lot. My body definitely feels it.”

Given Ballard’s various duties, coach Chad Depee appreciates the efforts he has made to pack on weight to aid his durability.

“It's always hard to gain some weight with the amount of energy the kids expend,” Depee said. “We're always going to push multi sport guys. With that being said, there's a lot of demand on those guys.

“Those kids have to pay special attention to their water intake and what they are eating,” he added. “They are burning up energy. They can eat like crazy and to gain weight is still tough. You really have to have the mindset you are going to gain 10 pounds.”