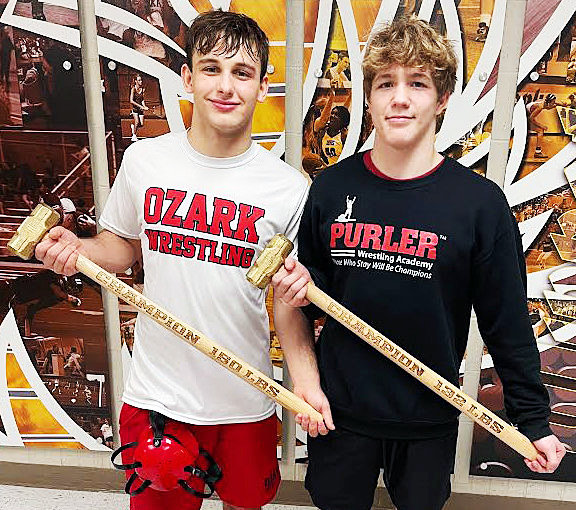 Ozark's Braxton Strick and Nixa's Zan Fugitt both added a prized 'Tonka hammer to the list of hardware from their decorated prep careers.

Strick and Fugitt captured championships at the Winnetonka Tournament in suburban Kansas City over the weekend. With their titles, they were awarded wooden 'Tonka hammers.

Strick went to an ultimate tie-breaker to claim a 3-2 victory versus Pleasant Hill's Garrett Lyon in the 150 title tilt.

Strick recorded six straight pins on his way to the final round.

Strick has won 29 matches in a row.

Fugitt upped his record to 33-1 by recording an 18-3 technical fall against Oak Park's Jamison Tunstill in the 132 title tilt.

Fugitt won by fall in five matches leading up to the final.

Ozark and Nixa will be in Webb City on Saturday to take part in the COC Tournament.