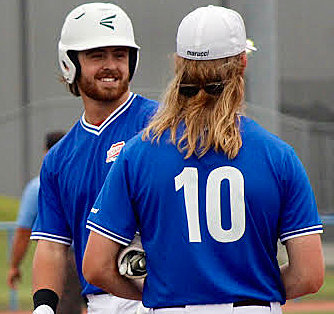 Fans who watched a video on Twitter of Colton Casteel’s return to the ball diamond might not have known who to be happier for, Casteel himself or his mother.

In his first at-bat for the Route 66 Stars in Show-Me Collegiate League action last week, Casteel ripped a three-run double off the left-field fence.

During a video of the hit, the emotion in the voice of Casteel’s mother was clear and compelling. “I don’t care where it goes, I just want him to make contact,” she pleaded before Colton connected on the first pitch he saw.

The hit will always carry significance for the Casteels in that the at-bat marked Colton’s comeback from shoulder surgery last winter. He went under the knife on Dec. 1.

“It was a good feeling to know I still have it, that there's still something left in the tank,” Casteel said. “I hadn't had a good feeling like that in a long time.”

His freshman season at Northeastern State (Oklahoma) was over before it could get started. The right-handed throwing Casteel red-shirted in the spring as he rehabbed his right shoulder.

The injury lingered last year, as Casteel tried to prepared for college.

“It was an impingement and a bone spur that was digging into my rotator cuff,” he said. “I tried to play through it and was hoping it would get better. But once we started practicing, it got worse. During the second day of practice it came right back. I got it checked out.”

Casteel, a catcher and outfielder, related the pain was overwhelming.

“When I would throw, all my tendons would rub on that bone,” he said. “It felt like someone was taking a knife and stabbing me in the shoulder. It wasn't any fun.”

Doctors shaved off the bone spur.

All things considered, it was about as good of news as Casteel could have hoped for.

“There are a lot worse things that could have happened,” he said. “At first, we thought I tore my labrum. That would have been a year recovery.”

Casteel is currently limited to serving as a DH for Route 66. He’s off to a good start. He had five RBIs in his first two games, following up his bases-loaded double with a bases-loaded walk and an RBI-single against the Queen City Crush.

Casteel hopes to be behind the plate or in the outfield this summer.

“I started my throwing program in early February and should be able to throw again soon, maybe by the end of this month,” he said.

Casteel said even as he rehabbed, Northeastern State coach Jake Hendrick made him feel a part of the team.

“I love that guy,” Casteel said. “He let me travel with the team and get reps in the bullpen. That was nice because a lot of those guys were in the high 80s and low 90s. It would be tough to frame those pitches after not seeing them for a long time.”

The video of Casteel’s double attracted more than 1,600 views in only a few days.

“A lot of that came from the NESU guys,” he said of his college teammates. “It shows how much support those guys give, even being a young guy who didn't play. A lot of my friends on the team are older guys. Those guys want everyone to succeed. I love it there.”

“I'd been going in the clubhouse and hitting off the machine. But I hadn't seen live pitching,” Casteel said. “When I stepped in the box, I thought, 'I'm going to swing as hard as I can and just try to make contact.' I put a good swing on it and it hit the fence. First at-bat, that was pretty cool.”

Looking ahead, Casteel is optimistic he can hit for more power at Northeastern State than he did at Ozark.

“In high school, I never hit for much power,” he said. “I'm using my legs. (Hendrick) has helped me use my body more and generate some power. It's been fun to see the ball go.”