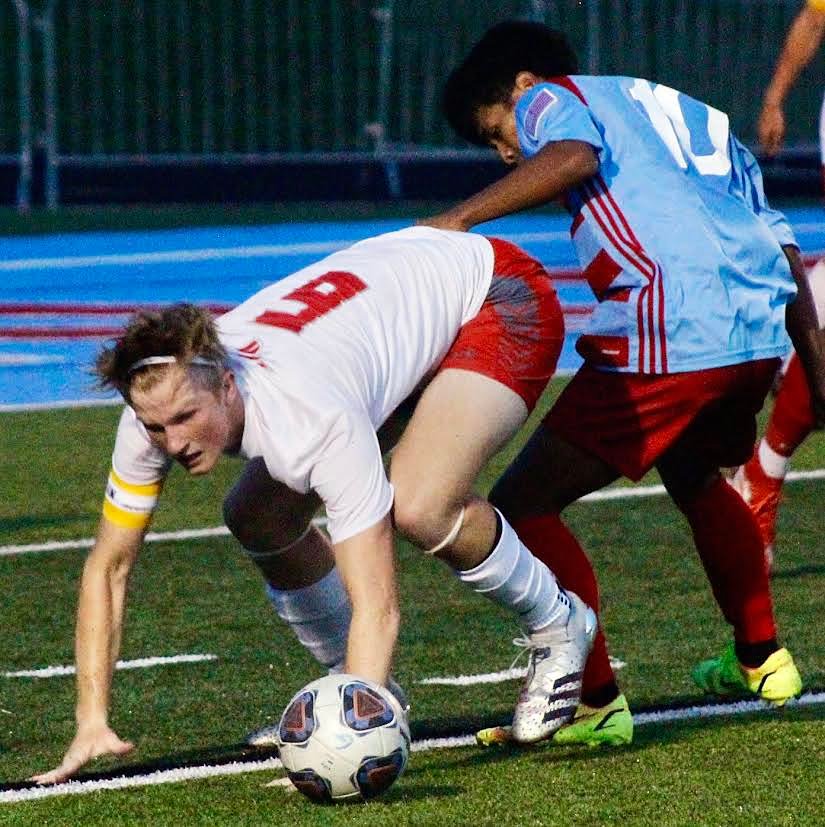 When the Nixa soccer and football schedules were released, Kaleb James was preparing himself for this week and the type of frantic Friday he enjoyed two years ago.

On the first Friday of October, 2020, James played in the first half of Nixa’s 2-1 soccer victory against Springfield Catholic at the Kickapoo Shootout, before strapping on his football uniform and shoulder pads and making it to Ozark five minutes before the opening kick-off in the Eagles’ 35-7 Backyard Brawl victory.

Tonight, Nixa soccer was initially to play Chaminade at 5 p.m. at Ozark prior to Nixa football hosting Branson at 7.

Alas, plans changed and the soccer match got pushed back to 7.

“The Chaminade coach said they couldn't leave (school) early,” James said. “If they could have kept the game at 5, I would have done (both games).”

In two weeks, James is due to double-dip, but won’t have to worry about driving over the speed limit. He and his soccer teammates will play Lee’s Summit West at 11 a.m. on Sept. 30 at the Kickapoo Shootout, before he and his football cohorts play at Carl Junction at 7.

James making the opening kickoff on Oct. 15 could be a close call, but should be doable. Nixa soccer will meet Christian Brothers College at 2 p.m. at the Art Firley Showcase in Jefferson City and Nixa football will host Republic at 7.

James will miss Nixa’s soccer game tonight to be in uniform for the Eagles’ football game. If things go as expected, he’ll be busy booting kickoffs and extra-points as the Eagles (3-0) are heavily favored to make the score whatever they want against Branson (1-2).

James has been a key cog in Nixa’s ascent to the top of the COC alongside Joplin (3-0). He’s recorded a touchback on 18-of-22 kickoffs, is averaging 40.3 on four punts, 16-of-17 on extra-points and made good on a 36-yard field goal against Neosho in Week Two.

“I haven't gotten exactly where I want to be in some aspects. But I'm kicking it well enough to help my team,” James said. “I'm glad to be punting like I should. Webb City (in Week One) was a little bit of a slip-up. But we’re back to how I should be punting.”

James strives for a touchback on each of his kickoffs, but admits that’s asking a lot as a game goes along.

“Playing two sports does take a little out of my leg,” he said. “Those late kickoffs, especially against Neosho where we were kicking off 10 times, I was getting tired.”

James’ right leg loomed large in Nixa’s 22-21 win against Carthage last week. He averaged 53 yards on two punts and pinned the Tigers at their one-yard line in the fourth quarter. Also, he had three touchbacks on his four kickoffs.

Meanwhile, Carthage repeatedly was content on kickoffs to boot the ball to the Nixa 40-yard line.

“A high school team having to drive 80 yards every single time, it doesn't matter how good you are. You could tell it weighed a lot on Carthage,” James said. “We're going to have an advantage against pretty much every team in the state when it comes to special teams. We probably have the best special teams in the state apart from maybe Liberty North and CBC.”

'It's gut-check time,' Palmer proclaims after Eagles fall to another Springfield foe