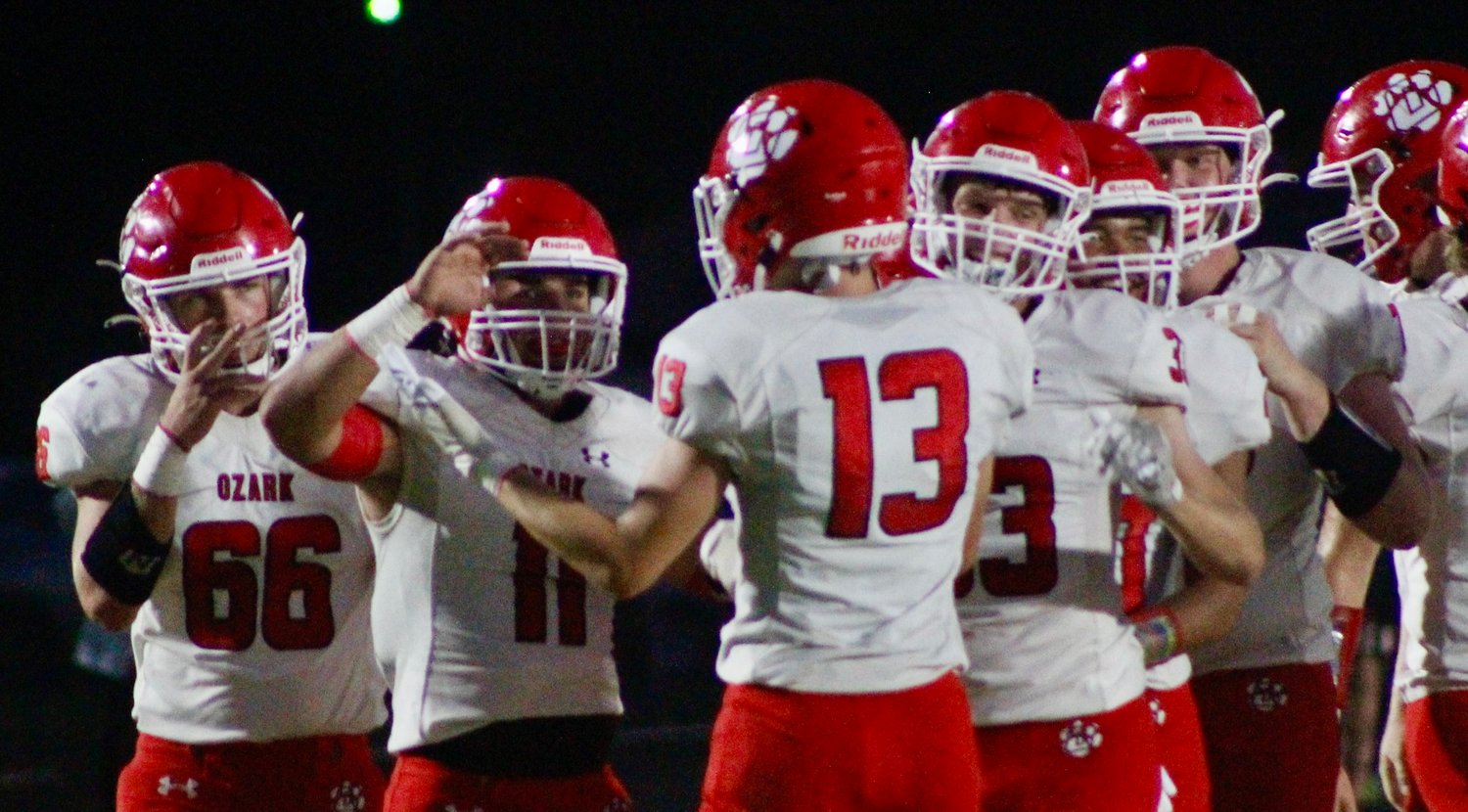 WILLARD — Ethan Sutherland exited stage left Friday with a noticeable limp due to an injured knee, but only after making a grand entrance to jump-start Ozark’s 40-0 whipping of Willard.

He later had a five-yard touchdown catch to help Ozark to a 33-0 halftime lead and its first win on the season..

Alas, Sutherland eventually had to endure a bit of agony to go with his glory.

“Early in the fourth quarter, I had to block a middle linebacker on a run on my side and (tight end) Cooper Buvid did a great job washing their D-end down. But it was one of those unfortunate situations in which he fell on me and my knee buckled,” Sutherland said. “Other than that it was a great night.”

It was a much-welcomed turnover-free night for Ozark (1-3).

That cleared the way for Sutherland, quarterback Brady Dodd and wide receiver Garrett Ballard to all enjoy a stellar night.

Dodd completed 6-of-8 passes for 119 yards and four touchdowns, in addition to running for two more touchdowns. Ballard hauled in two touchdowns among his four receptions for 79 yards.

“It showed the capability of our offense,” Dodd said. “Turnovers are what has killed us. We did a good job of eliminating that in this game. We’ve been talking about doing that the last three weeks.”

"Unforced errors have been our biggest problem," Ballard said. "We eliminate those and we can score a lot of points."

Turnovers played a big part in Ozark having the turbo clock work against it in each of the first two weeks. In contrast, coach Chad Depee’s bunch put the turbo clock in play Friday for almost the entire second half.

“We made some really good strides in Week Three,” Depee said, referring to a 29-22 loss versus Joplin. “The kids were gelling together in all facets. We didn’t do the things we needed to do to win that game. But I think it proved to the kids what we are doing, to stay the process and if we don’t make those little mistakes, we can win ball games.

“This week, I felt like the kids took another jump,” he added. “We started fast. We had good things happen early and built upon that. The big thing was focusing on each and every play, ‘What is my job right now,’ and ‘Don’t worry about the play before or the play after.’ It’s time to keep plugging away and get better.”

Depee appreciated the fact Ozark put up points on four of its eight pass attempts.

“We’re not necessarily what I would call a prolific passing offense. But we don’t mind passing,” Depee said. ”Our kids are good perimeter blockers and run the football well (after a catch). They get opportunities for those plays and then they execute.”

Depee added Sutherland has earned the chance to shine on both sides of the ball.

"Ethan has been the guy that whatever we need of him, he’s stepped up," Depee said. "He knows his assignments and can learn multiple positions. He’s also contributing on the defensive side on a full-time basis. He has bought in and continued to work hard in the weight room so he is physically able to endure what happens on the field. I’ve loved seeing his growth and am proud of him."

"You’re never really prepared for the Friday night football speed of the game and the conditioning you need," Sutherland said. "Now that I know what it is like, I’ve been putting in the work to be ready for a night like tonight. I know what it takes to get it done.”

Ozark's passing game thrived Friday, even without the services of its top receiver. Jace Whatley sat out the game and wore a sling on his right arm due to a collarbone injury he suffered last week. He has six receptions for 84 yards on the season.

"We’ll see how he heals up," Depee said. "We want to get him healed up so he can be 100 percent. When he gets the green light, he’ll be back out there."

Ballard credited first-year Ozark receivers coach Dyllan Decker for his assertion as a wideout. Decker is a Camdenton grad who was Evangel's starting quarterback a year ago.

"Props to him and we’ve been putting the work in," Ballard said. "He knows the routes and throws great balls to us in practice. He works as hard as any of us during practice by getting in a lot of reps."

"To have a young guy who is just starting his career and is gung-ho and full of energy, it’s great to have him here," Depee said. "Number one, he’s a competitor. He’s got a highly competitive spirit. I love that he gets to bring that to our group. Also, I love having a range of ages on our staff. You can’t reach every kid. But you hope in your staff you have multiple types of people who can develop great relationships with the kids and meet their needs so they continue to grow as men."

Ozark's shutout was its second straight at Willard, but still surprising. Last year, Ozark won at Willard 52-0. Over the first three weeks this season, Ozark had allowed 122 points, while Willard had put up 104 points.

Depee was pleased to see his defense continue to play with intensity in the second half.

"That was another sign of a maturing team and one that says, ‘There are plays to be played out there and we need to go win them," he said.

"We’re starting to turn things around," Ballard said. "If we can keep this momentum, we'll have a great second half of the year."