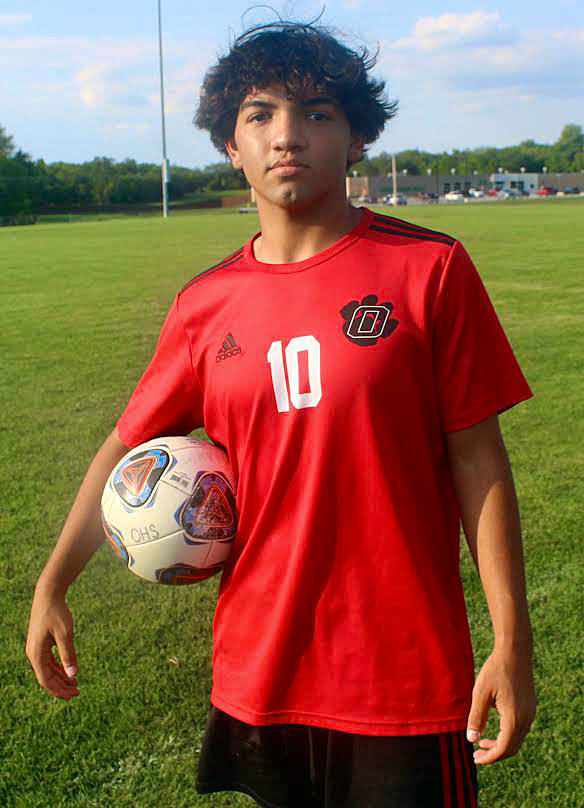 One would be hard-pressed to find a player within the COC and perhaps around all of southwest Missouri whose star has risen as dramatically as Ozark senior midfielder/forward Adrian Ortega.

A year ago at this time, Ortega was first and foremost known as the younger brother of Jose Ortega. Adrian was unabashedly his older brother's biggest fan and even proved prophetic by predicting Jose's winning goal in the Class 4 District 11 championship in 2020.

"It was a huge confidence booster for me," he said.

The honors kept coming for Ortega over the summer. In his first stint playing club ball with Sporting Springfield, he was chosen to the Elite Clubs National League All-Conference Team.

Ortega received word of the honor two weeks ago.

"It was unexpected. It's exciting. I told my Mom about it and she was happy for me," Ortega said. "It was fun playing with Sporting this year. It was a big change for me from the team I had before. The team I was on before wasn't the greatest. I joined a team with a bunch of talent. I liked it a lot."

Playing with Sporting Springfield introduced Adrian to life without Jose alongside him on the field.

"I played without Jose throughout club season, it was just me and my friends, so this year is not going to be too much different than that," Adrian said. "I'll miss playing with him. It was nice having a player who could dribble through a bunch of players and make plays for themselves or create opportunities. This year, it's kind of focused on me."

Ortega is ready to pick up where he left off and then some.

"I'm expecting a lot from myself, to kind of lead the team, and I'm sure my teammates are, as well," he said. "Hopefully, I can score more this year."

"(Carthage's) Welle Welle is a great player and there are a few others," Owens said. "Adrian is going to be one of those top kids."

Ortega has his sights set on joining his brother, Owens and 2021 Ozark grad Dillon Holesapple on the list of the Tigers' career goals leaders. The records board is on display in a hallway adjacent to the school's gyms.

"It's kind of a competition for me to pass Jose, coach and Holesapple," he said. "That's a big goal for me. I've got to take them out one by one. It would be cool to do that. I'd probably have to take a picture of it."