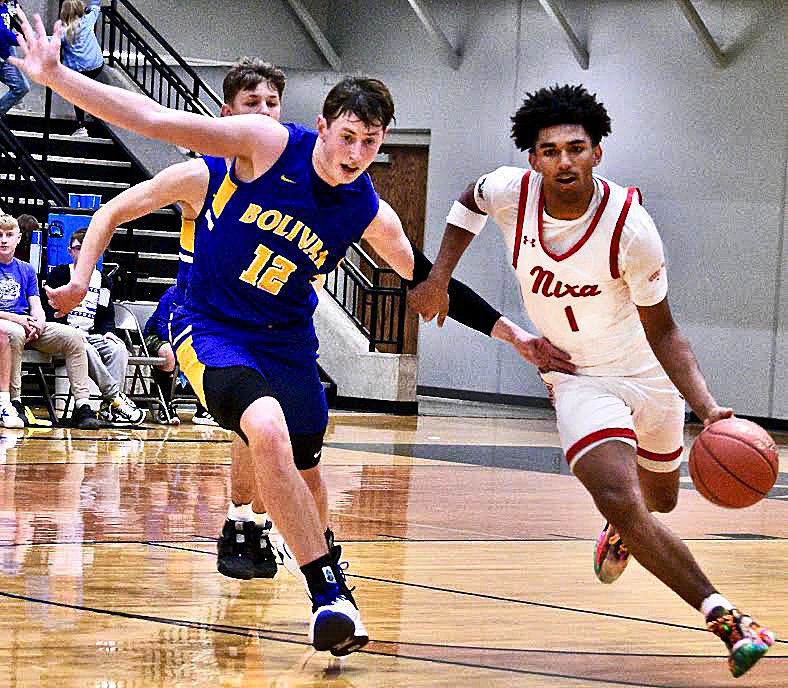 WILLARD — Nixa’s well-reputed student section was uncharacteristically absent for the championship game of the Willard Classic on Saturday. But Bolivar’s student section traveled well and made its presence felt from the get-go.

As early as the Eagles’ first offensive possession, the Liberators’ fans were vocal and all but begging Nixa guard Kael Combs to fire away from 3-point line.

At the time, Combs was directly in front of the student section as he held the ball and he revealed later he most definitely heard the fans’ dare. He took their dare, but  missed.

Combs didn’t miss much the rest of the night in a showdown of stars. The senior guard scored 28 points in Nixa’s 74-70 win over Bolivar and Kyle Pock, who had 26 points

“Every student section tries to get in my head a little bit,” Combs said. “I hit a 3 one time and looked over there at them.”

Likewise, Combs feels he has had to constantly prove himself as a perimeter shooter all the way to being on the brink of joining Nixa’s 1,000-point club.

He will enter this week’s Liberty Tournament with 981 career points.

Combs had the edge on Pock in the scoring  column and from 3-point land. Combs had three treys and Pock a pair.

The sentiment out of Nixa is Combs’ highly-flying ways and exceptional athleticism overshadow his shooting.

Folks figure he surely can’t have it both ways. But he does.

“I go to the paint a lot because I can,” said Combs, whose four points in the paint against Bolivar came on two breakaway dunks. “I don’t depend on my shot. But I definitely can shoot the ball. I work a lot to be able to shoot it. I definitely think it’s an underrated part of my game.”

Pock, who has played summer ball with Combs off and on since they were in the fifth grade, agrees Combs is underrated from 15-20 feet out.

“Maybe people don’t think it’s a strength in his game,” Pock said. “But he can really shoot. He’s a complete player.”

The numbers show Combs has been an above-average shooter throughout his career and even an elite bomber last season.

The southpaw has 80 career 3-pointers and was a 47-percent 3-point shooter last season. Overall, his field-goal percentage has went from .529 his freshman year to .574 his sophomore year and .591 his junior year.

Combs’ free-throw shooting was also on display Saturday. He hit his first 10 attempts from the foul line and finished 15-of-18 shooting freebies.

“He hit some huge shots to get us back in the game in the first half,” Nixa coach Brock Blansit said. “He kept us in the game at the free-throw line (over the first and second quarters) when we went about five or six minutes without a field goal.”

“He’s a smart player. That’s why we’ve got him running the point,” Blansit said.

Three games into Nixa’s season, Blansit’s decision to move Combs from swingman to playmaker is bringing out Combs’ best.

“I’m super grateful for my teammates and coaches,” Combs said. “Coach Blansit is all about the players. He puts me in position to score a lot.”

Combs had plenty of company from 3-point land. Josh Peters netted six 3-pointers during his 24-point performance, Garrett Hines hit four treys for 12 points and Devon Kemp added a 3 of his own.

The Eagles went from being 12 down, 33-21, midway through the second quarter to being eight up, 59-51, with two minutes remaining in the third quarter.

Nixa sealed its win by rebounding a missed 3-point try to tie by Pock with :03 remaining.

The tournament championship is the Eagles’ first regular-season tourney title since they won the Carthage Tournament two years ago.