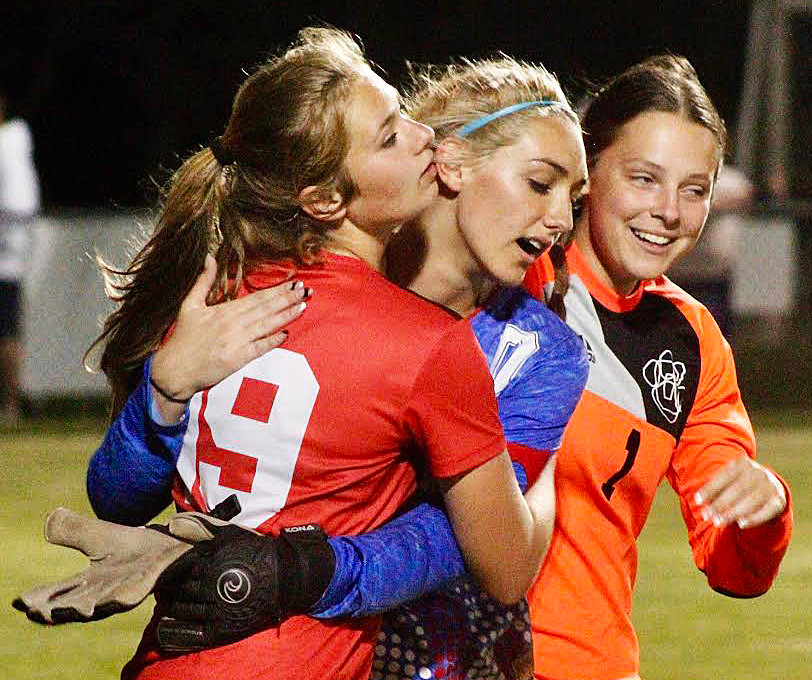 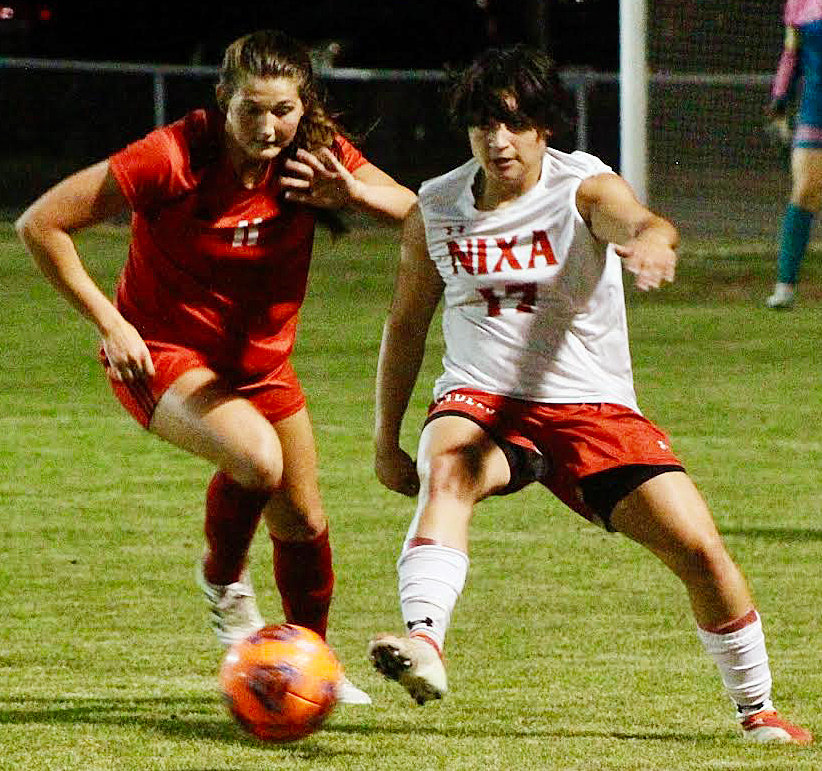 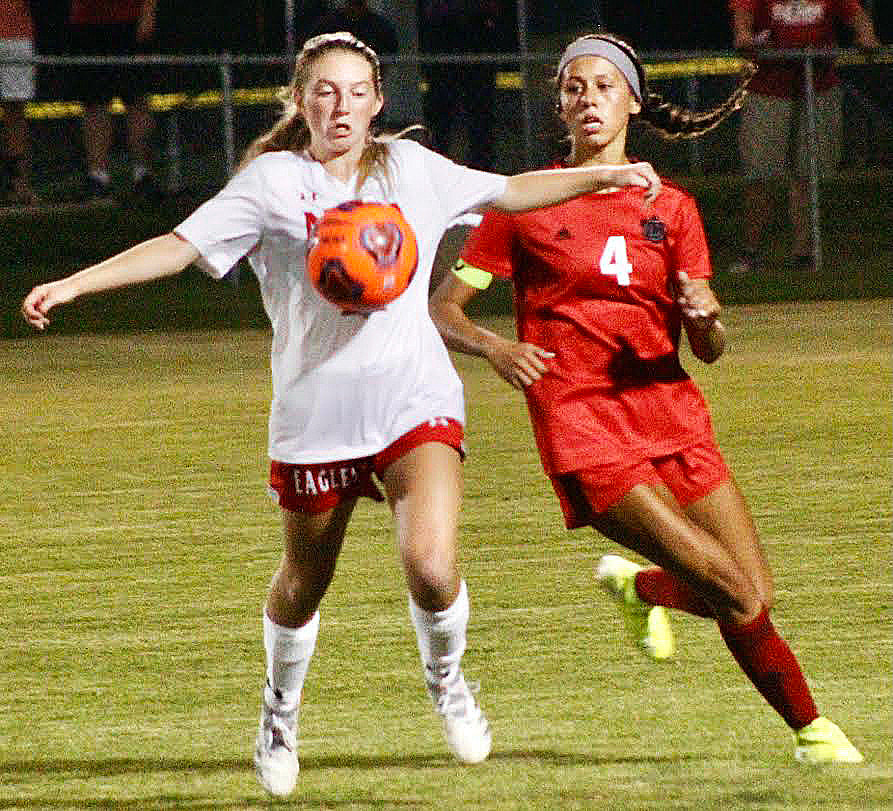 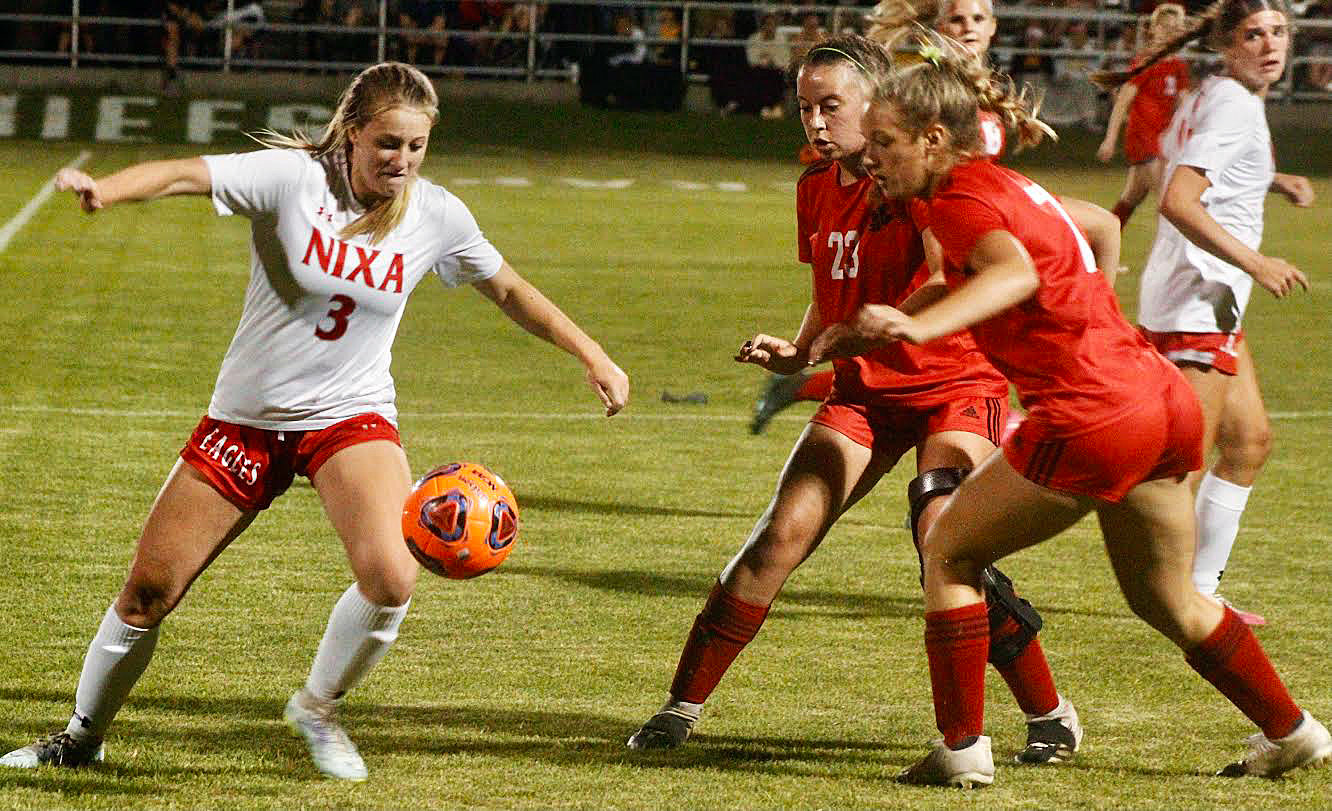 SPRINGFIELD — Even after 80 minutes of regulation and 30 minutes of overtimes, Ozark forward Madison Morgan sprinted half the field to lead the Lady Tigers’ celebration Tuesday.

“At that point, being tired didn’t matter anymore,” Morgan said.

Being tired actually didn’t seem to matter to anyone all night.

To the surprise of no one on either side, the teams battled to a defensive draw through regulation and two extra periods. Physical play led to the defenses dominating, just as was the case in Ozark’s regular-season 1-0 win at Nixa. Lapses in concentration or energy were at a minimum. The intensity was high.

“We planned for this to be a long game and a tough one,” Morgan said. “We knew it could go either way. Knowing it could be the last game for each side and for each set of seniors, that’s why so much effort was given out on the field.”

“It was a battle,” Burks said. “We stuck in there and I’m proud of us. I’m glad when we got to the PKs that we didn’t we lose it. We stayed mentally focused.”

Prior to Ozark’s heroics in penalty kicks, Nixa (12-10) briefly appeared to have pulled off the win in epic fashion. As the final seconds of the second overtime dwindled, the Lady Eagles sent a corner kick into play. After a scrum for the ball in front of the Nixa goal, Bella Johnson headed it to teammate Gwen Jones, who promptly found the back of the net.

The final horn sounded after Jones’ would-be goal, but the officials ruled the horn was delayed and went off after the clock had expired.

The scoreboard at Kickapoo is on the opposite side of the field where the play occurred.

“I think you play it out,” Nixa coach Evan Palmer said. “The bad thing about American soccer is the stupid clock we have to deal with. Why not just have the referee have the time on his watch? Then, stuff like this won’t happen.

“That was one heck of a goal and one heck of an ending,” he added. “It’s frustrating. You hate to see a season end like that. We told the girls, ‘Life isn’t always fair.’ Sometimes, you play great and you lose, that’s the way it goes.’”

Burks said she obviously couldn’t tell if time had run out, but felt the goal shouldn’t have counted, anyway.

In the first overtime, Burks made a nifty one-handed save above her head by deflecting a Nixa shot over the goal.

“I was thinking to myself, ‘Wow, that was a close one,’” Burks said. “That’s instincts and when my adrenaline gets going, all of that carries me.”

“We had great chances and they had some chances, too,” Palmer said. “I really thought with our chances, we’d get one. But we didn’t get the one at the end that we thought we did.”

During penalty kicks, the teams were tied 2-2 after Alexa Gaunt and Johnson scored for Nixa and Moore and Molly Rushing scored for Ozark.

Morgan was happy to set the tone for the Lady Tigers.

“I love to be the first one,” she said. “I know if I start it out right for my team, my team will finish it. I have this overwhelming sense of confidence that comes over me.”

Morgan booted her kick to the right of Nixa goalkeeper Madison Snelson. She had made up her mind she was going right and didn’t hesitate.

“The second we went into penalties, I kept that (mindset) the whole time,” Morgan said. “I plan it out and don’t switch.”

“We practiced PKs yesterday and I stopped like one out of 20,” Burks said. “When we went into PKs tonight I was like, ‘Great, we’re going into PKs, can’t wait.’”

Burks’ mindset was simply to clear her mind and focus on nothing but the ball.

“I don’t pick a side or watch their body,” Burks said. “Some girls are getting pretty good at hiding how they move. I just watch the ball and go for it — see the ball and go, or you don’t.”

“I’m so proud of our ‘keeper,” Morgan said. “I have so much confidence in her to lead and guide us as she sees the whole field for us. She’s the best.”

Palmer felt the pressure of PKs might have got the best of his players.

“Their goalie made nice saves and (our attempts) were down the middle. We kind of froze up a little bit. That happens. We’re young,” Palmer said. “With almost a whole new team this year, we didn’t drop off very far and gave ourselves a chance to win. The way they fought and were still very competitive is all you can ask for as a coach.”

Ozark will be going for its first District championship since 2008.