By breaking away from Ozark, Nixa goes to two full years without a loss to a COC foe 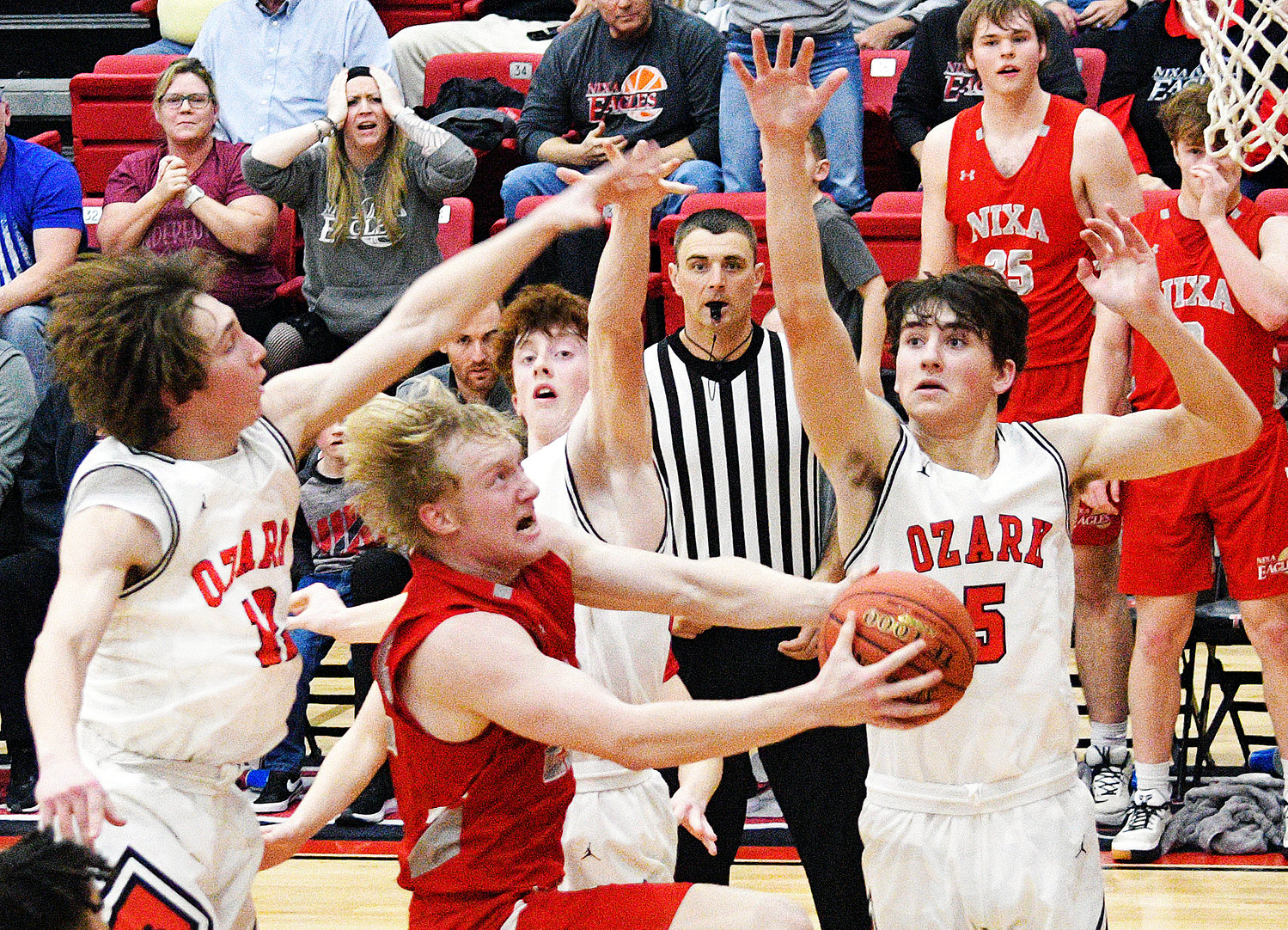 With Jaret Nelson being the last player to emerge from Nixa’s locker room Tuesday, he found himself alone along a hallway before being stopped by Ozark coach Mark Schweitzer outside the Tigers’ locker room.

Schweitzer shook Nelson’s hand and passed along praise to him for his hustle and in particular his attitude as a team-first player.

By design and perhaps even out of necessity, Nelson was the first player Nixa looked to offensively in its 83-67 triumph at Ozark.

The senior center scored 10 of his 17 points in the first quarter to give the Eagles’ offense a much-needed kick-start, after a 79-53 drubbing at the hands of Blair Oaks a few days earlier.

It was in complete contrast to Saturday, when the Eagles didn’t look Nelson’s way very often. He had just two points over the first three quarters and Nixa put up only 16 points in the first half.

“It is frustrating, especially in games in which we’re not shooting well,” Nelson said about not being involved more offensively at times this season. “But I feel like it’s my role on the team to play whatever role I can play. Against Blair Oaks, it was my role to guard (all-state center Luke Northweather). Some games, it’s my role to rebound and some games it’s my role to play defense, some games like tonight, it’s my role to score. That’s how I roll with it.

“I feel I ran the floor well tonight,” he added. “Me running the floor and scoring is about having selfless teammates and them giving up the ball. I can’t score without my teammates, being part of the team is a big part of my personal success.”

With Nelson establishing a presence in the paint, guards Colin Ruffin and Jordyn Turner went on to combine for nine 3-pointers and 43 points and forward Kael Combs contributed 17.

“We got Jaret involved,” said Ruffin. who had 25 points. “They had to double him because he’s just too strong for anybody.”

The culmination and coup de grace for Nixa was a 26-point third quarter. The Eagles extended their 38-34 halftime lead to 64-45.

Ruffin netted 17 points himself in the third quarter.

“When you get beat like we did, it’s embarrassing,” Nelson said. “I knew we were going to respond well. I knew there was going to be a different attitude coming into tonight.”

“It woke us up to have better practices,” Turner said. “Honestly, we’re a sub-par practice team. But our practice Monday was great and we came into tonight fired up.”

“The reason we played a lot better tonight was because of our loss to Blair Oaks,” Ruffin said. “I think it’s good to be humbled. We were super hungry. Preparing more for the game, getting more focused, limiting turnovers and making free throws, we played like a state championship team.”

Ruffin entered the game having moved to third place on Nixa’s career assists chart over the weekend. With 325 assists prior to Tuesday, he passed third-place Seth Viebrook (323) and fourth-place Austin Ruder (322).

Zach Towe owns the school record with 571 assists and Chris Hastings is second with 418.

Ruffin has 829 career points with six regular-season games remaining for the Eagles.

Just as Ruffin is arguably Nixa’s best all-around player, the same can be said for Tyler Harmon for Ozark. The Tigers were forced to play without Harmon for all but a few minutes, as he suffered a hip injury in the first minute. He tried to return, but was obviously hindered.

“It’s probably a different score and it would have been a lot closer,” Ruffin said of Harmon being able to play. “Injuries suck. I had one of my own this season. I don’t want that for anybody.”

“For Tyler to relent and not (play) means he was in some pain,” Schweitzer said. “Plus, I’m not risking a kid’s health. I asked the trainer three times if he could go when I put him back in there. I didn’t feel good about it. The kid was in tears, not because of the pain, but because he wanted to play in this game. The kids love this game and grow up wanting to play in this type of atmosphere. I hate it for him.

“Hopefully, we can get him healthy,” Schweitzer added. “We’re going to wait and see how he feels tomorrow. We can get him to a doctor if he needs it. I’ll pick him up in my four-wheel drive if I have to.”

Ozark (13-5 and 2-1) received 26 points from Ethan Whatley, 12 from Devyn Wright and 11 each from Colton Ballard and Jace Whatley. The Tigers kept pace with Nixa for all but the third quarter.

“We took a huge blow, but we competed our butts off and they had to expend a lot of energy to beat us,” Schweitzer said. “Anyone who watched it knows we didn’t quit. I’m proud of our kids’ effort. They literally clawed and fought the entire game. Colton provided some scoring and made tough shots in the lane. Early, Devyn provided scoring. They battled, competed and did everything I asked them to do.

“Nixa did a good job of switching to a zone to throw us off with our motion,” he added. “We were getting comfortable. (offensively). But we took too long to get comfortable against their zone. We weathered Turner getting hot in the first half by scoring with them. In the second half, we weren’t able to continue that momentum. Ruffin got loose and got hot. We don’t make excuses. We didn’t get it done in the second half and they hit shots.”

Nixa (17-3 overall and 3-0 in the COC) netted its 21st straight win against a COC opponent and its 18th straight conference win. The Eagles’ last COC loss was at Ozark two years ago this week.

“I’m proud of the guys, after such a disappointing effort Saturday. We responded,” Osborne said. “We gave great effort and played with passion. For the most part, we played with intelligence. It’s not rocket science, when you make shots everything else seems to go a lot smoother.

“We need to keep playing like this. We made some improvement,” he added. “This is always a hard game because Ozark plays so hard. They’re never out of the game. They’ve got weapons. To come over here and win feels really good. Anytime you beat Ozark by double digits, it’s a great day for Nixa.”