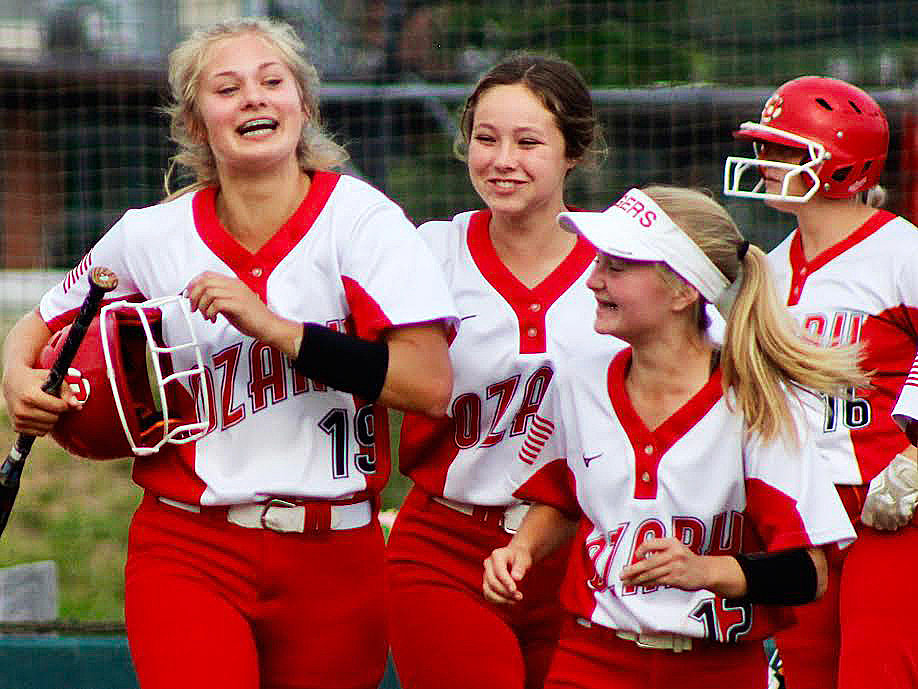 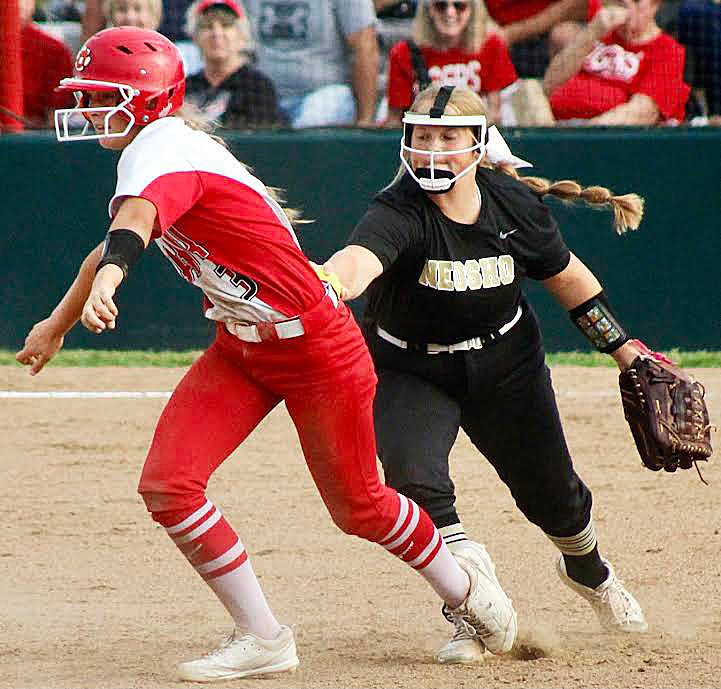 OZARK'S KELSIE BATEY is tagged out trying to get back to second base.
PAT DAILEY/Headliner News 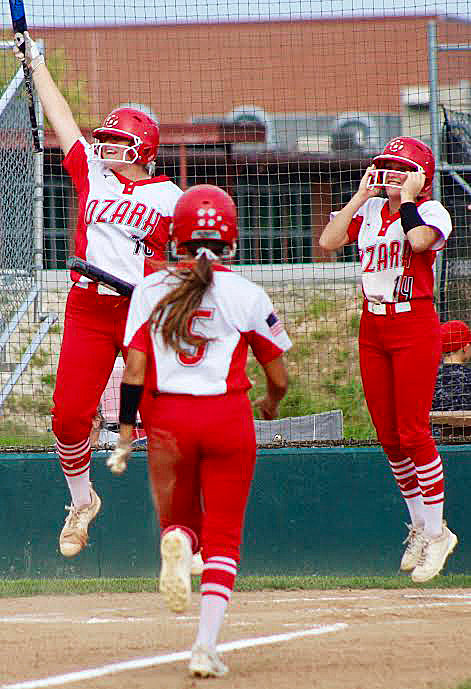 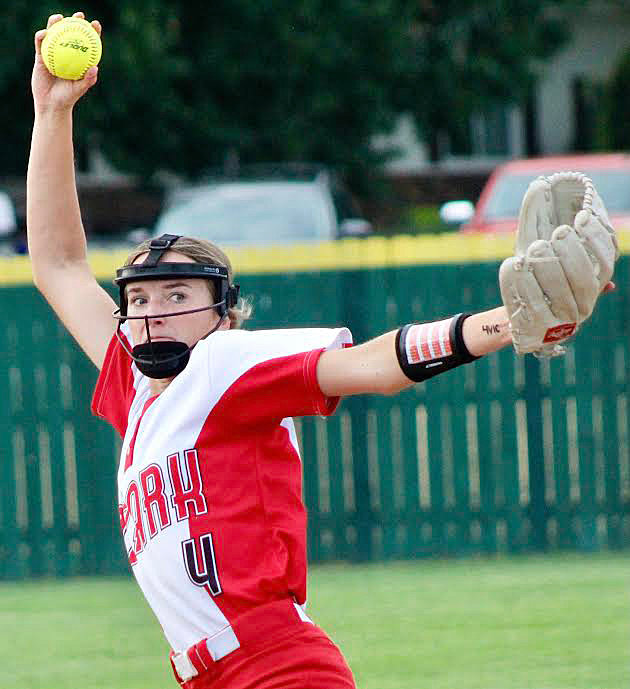 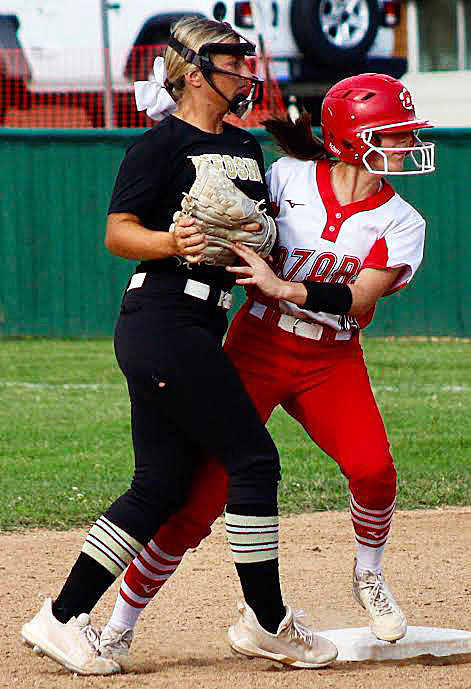 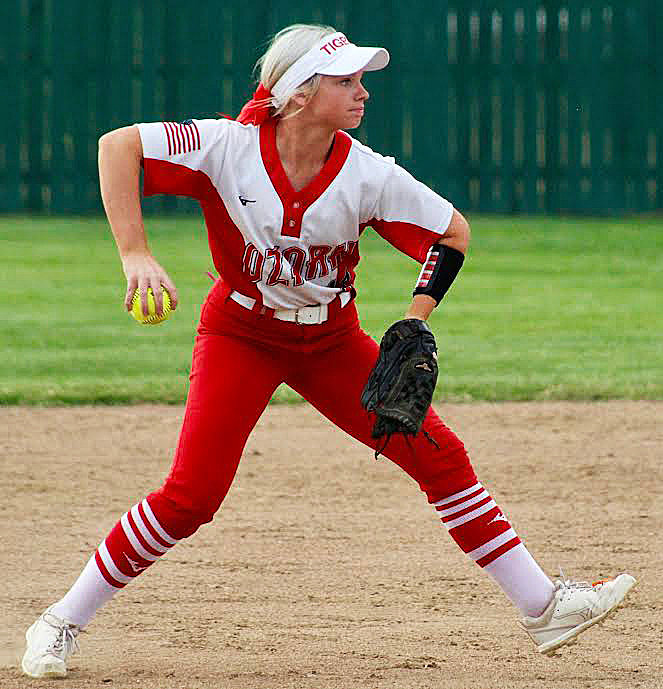 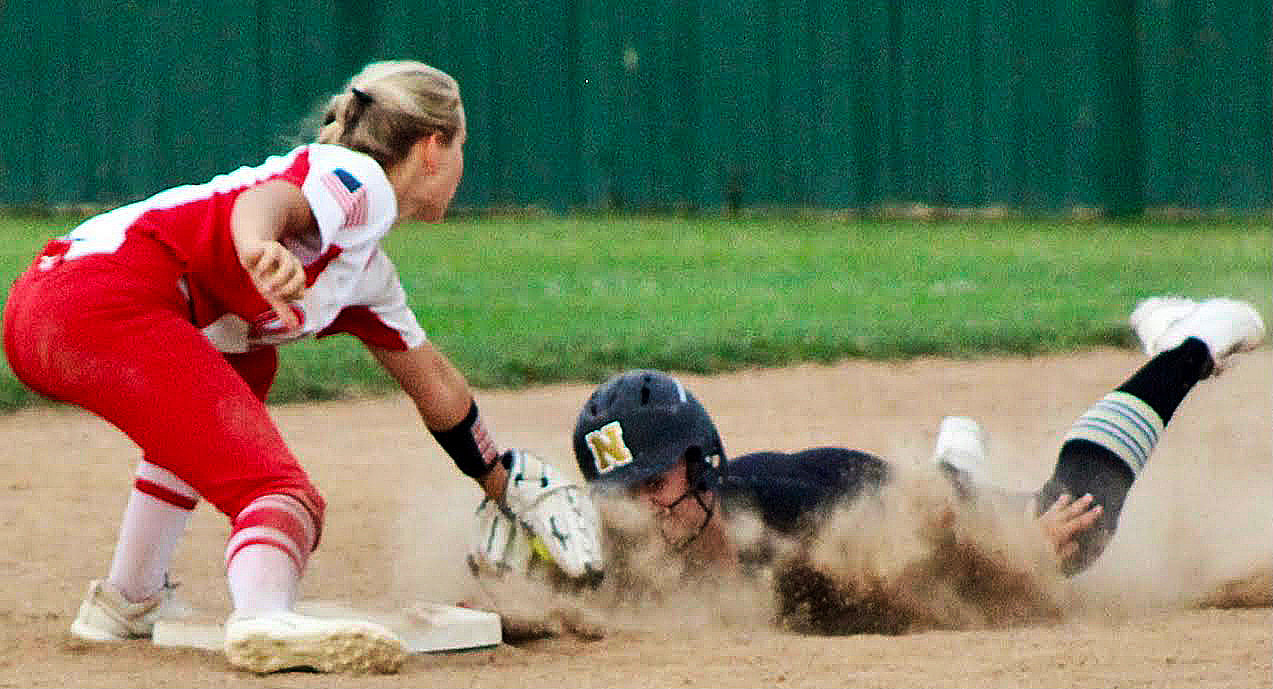 Carlton crushed a grand slam in Ozark's 6-4 victory versus Neosho on Friday, allowing the Lady Tigers to continue to sweep away their COC competition.

For all high-priced performance-enhancement tools in sporting goods stores near you, the Ozark center fielder was singing the virtues of the Lady Tigers' extension drill that involves not much more than a broomstick.

Carlton emerged from Ozark's dugout in between innings with a bat, teammate Kendall McCoy and a broomstick. McCoy proceeded to hold the broomstick waist-high while Carlton took slow-mo swings parallel to it.

“That’s an extension drill we do in practice, but I was like, ‘I need to do it now,’” Carlton said. “I was pulling my head (while swinging), as well as my hands and wasn’t making contact at all. The extension drill makes your hands go straight forward before pulling off. When I get extension, it makes my bat be in the (strike) zone longer to hit the ball."

With the Lady Tigers up 2-0 in the third inning, Carlton got extension and a 3-2 inside pitch that she ripped for a line drive over the left-center fence.

"Whenever I hit that, I said, ‘Oh, (the extension drill) really helped,'' she said.

"It's something I've adapted into our hitting this year," coach Jimmy Nimmo said. "The girls are pulling off the ball and we're trying to work the right part of the field and up the middle. They work on contact and stay through (their swing) extended. It allows them to stay on the ball instead of pulling their left shoulder. They stay through the ball longer instead of spinning off the ball so quickly."

Carlton has four homers, including two grand slams, on the season.

Courtney Merrell and Avery Elliott put the Lady Tigers up 2-0 with solo home runs in the first and second innings.

Winning pitcher Jordyn Foley shut out Neosho for the first five frames, before the Lady Wildcats made a game of it by plating two runs in both the sixth and seventh.

But Neosho cooled its own comeback bid. Following a single with a runner already on base, a Lady Wildcats batter was an easy out at second for the final out of the night while trying to advance after an Ozark throw to third.

Nimmo is hoping Foley can close out games in the future without such late drama.

Third baseman Allie Muggenburg fielded two groundouts in the seventh and made the throw to second for the final out.

"They made a baserunning mistake and she made a good throw to got us out of it," Nimmo said. "Allie made great plays. Third base is new to her. But she has come a long way."