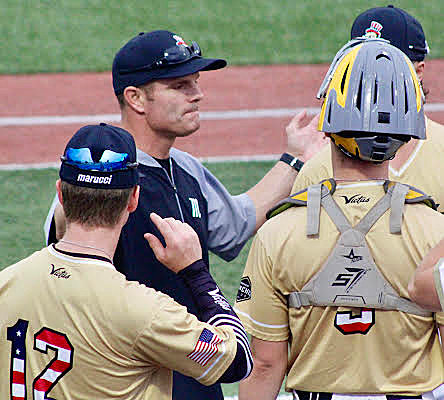 Prior to meeting many new faces, Jason Daugherty is enjoying the chance to renew relationships with old acquaintances.

The former Nixa coach has been reunited with former Eagles Jaret Nelson, Sam Russo and Ryan Retone, as he coaches Victus in the Show-Me Collegiate League.

Daugherty coached that trio for the first three years of their high school careers.

“I love it,” Nelson said of having Daugherty as his coach again. “It was weird not to play under him this year. I love (new Nixa coach Logan Hughes). But it was a switch going from a guy I played under for six years to a guy I'd never played for. Getting to come back with JD is a lot of fun. It's going to be a good summer.”

Daugherty’s family and his wife’s family are from Kansas City.

“It was only a matter of time before we headed up there and now is a great time to go,” said Daugherty, who has three children. “(The grandparents) are ecstatic about us being up there.”

Daugherty has spent all of his coaching career in southwest Missouri. He started at Stockton and was at El Dorado Springs, before spending 12 years at Springfield Catholic.

“I'll definitely miss the people here,” Daugherty said. “I made a lot of acquaintances and friends. I love all my players. I'll stay in touch with them. I'll miss this area.”

He’s looking forward to resuming his coaching career in new surroundings. During his first year in Kansas City, he’ll try to get established and make as many baseball contacts as possible.

“Obviously I have a lot more contacts down here. I've been around here forever,” Daugherty said. “I don't have many contacts up there. But I'm a somewhat personable guy I'd like to think, so I'll make some friends quick and make some contacts. I feel like I can do a lot of different things. Things will be just fine.

“Change is always tough. It's refreshing, too,” he added.” A new start is exciting. There are a lot of things Kansas City has to offer that we don't have here. There will be more opportunities.”