Eagles claim tourney title at their home away from home 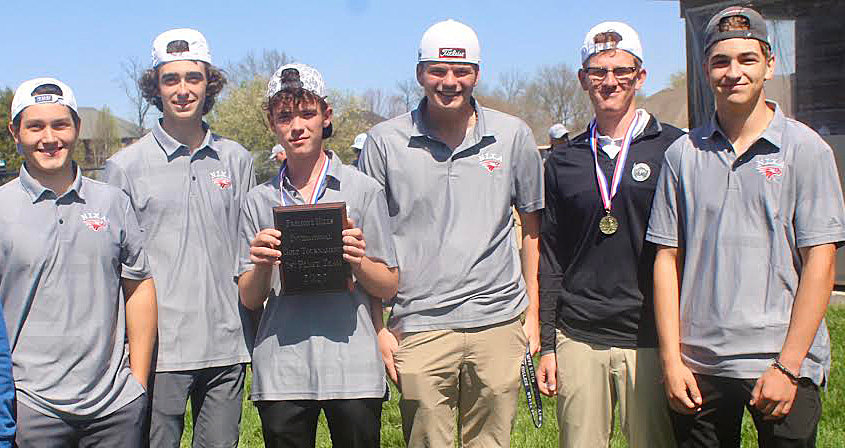 Nixa took the Ozark Tournament championship at Fremont last week with a team score of 293, six strokes better than the rest of the field.

“A lot of us are members here and play a lot here together,” Jordan Hatman said. ‘Me, Johnny (Miller), Chance (Wilhite), and Chandler (Burch) are out here every day. This feels like home. I love this course. This is where I started playing golf.”

Hatman and Burch led the Eagles and finished is tie for sixth place individually with rounds of 71. Noah Naugle shot a 73 and Meyer Lively and Wilhite both posted a 78.

“I can’t ask for better teammates,” Burch said. “We have a good group of players and we all know what to do to win.”

“We all can score, it depends on who shows up and how we’re feeling,” Hatman said.

The Eagles have had a different leader on most days.

“I’m not sure I’ve had a group of kids who love to compete as much as these guys,” coach Jeff Lotz said. “I like their attitude. They love to beat the other guy. On any given day, any person can beat the other. My wife literally pulled their names out of a hat and that was our order today.”

Burch’s round was highlighted by birdies on the 13 and 18 holes.

“Everything was smooth today,” he added. “I was rolling. I usually have good irons and was pretty accurate with them today.”

“It’s dead straight, so I opened the club face and hammered my drive,” Hatman said. “Then, I hit a wedge probably within 12 feet and then made my putt.”

He was most proud of keeping his composure after opening with a double-bogey on the No. 6 hole.

“The hole that stands out to me was my first hole of the day, where I made a double bogey,” Hatman said. “I went way right off the tee and couldn’t find my ball, so I had to take a lost bal. But I still saved for a double bogey. When I was come back up the No. 2 fairway, which runs right next to (No. 6), I spotted my ball as I was walking by. It was sitting inside a tree. I was shocked.”

“He could have fallen apart after that, but he kept it together,” Lotz said. “That’s what separates the guys on the (PGA) tour.”

“We’ll see if we can maintain this,” he said. “The key is the end of the season. Are you going peak at conference, Districts and State? You’ve got to stay hot. The only thing that can stop them is themselves.”