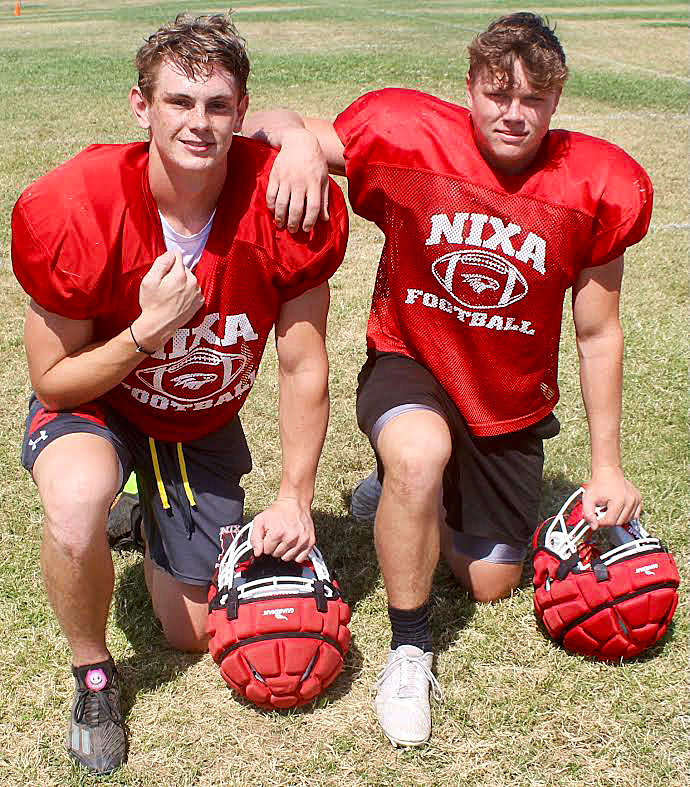 The irony of Nixa defensive end Corbin Speaks’ last name has not been lost on him and his friends.

“People are like, 'You entirely go against your last name,’” Speaks said. “It's not like I'm anti-social. I like to talk and can carry a conversation. But I'm not necessarily loud out on the field.”

Likewise, Eagles linebacker Ty Hartman usually isn’t one who will speak, unless spoken to.

“If you can get two words out of them you’re doing good,” coach John Perry quipped to a reporter upon having Speaks and Hartman summoned for an interview. “They’re meek, but mighty.”

Hartman and Speaks barely registered a blip on the radar of many Nixa fans last season, despite both being integral parts of the Eagles’ defense. Hartman registered 99 tackles, three tackles for a loss, two interceptions and 1.5 quarterback sacks, while Speaks was in on 75 tackles, including one sack and one TFL.

But with big-time players and big personalities the likes of John Gholson and Jaden Aven headlining Nixa’s defense, Hartman and Speaks usually got lost in the shuffle.

“We kind of keep our heads down and do our job,” Hartman said. “You don't have to be loud all the time. We stay focused.”

“I’ve never been a super loud guy,” Speaks said. “I’m going to line up silent, ignore the guy across from me and beat him every single play. Let that get into his head. Do that over and over again. I let that be my trash talk.”

Speaks has no use for trash-talking.

“After a play, I stand up and line back up. I never celebrate,” he said. “It annoys the heck out of me when people cross the line with being loud and trash-talking. Have respect for the game and play. That's my goal, play the game right and have fun by playing it correctly.”

“First class,” is how Perry describes his unassuming duo.

As seniors this season and especially with Hartman and Speaks boasting as much experience as any Nixa defender, they will be leaders in the Eagles’ huddle on that side of the ball. They’re doing their best to make their voices be heard.

“They are loud dudes and everyone respected them,” Hartman said of Gholson and Aven. “You kind of fell in line behind them and it made for a good team. Now that they're gone, it's making more leaders appear. You can start to see the dudes who are stepping up.

“We're working on being as loud as possible when we need it,” he added. “We try to motivate our teammates. I try to communicate to the younger guys and other guys on the sideline more now and hype them up. I like for them to get on the field and watch them and help them. But mainly we're going to be keeping our heads down and do our job.”

Speaks’ enthusiasm after the Nixa defense forces a turnover speaks volumes for the kind of teammate he is.

“I try to be more vocal by supporting my teammates and getting them hyped,” Speaks said. “I just don't celebrate my own wins. But I'm 100 percent celebrating other people's wins. If we get a pick or a big tackle, I love to sprint over, pick them up and get excited with them.”

Hartman will again be involved in many Nixa defensive stops. He’s assuming Aven’s former role while switching from outside linebacker to inside linebacker.

“I like it and I'm learning a lot. I get to see a lot more of the field,” Hartman said. “I’m all over the place now. It's a different kind of physical. You're not set on the edge anymore. You're flowing through gaps and trying to squeeze in in tighter spaces.”

Speaks and Jayden Antonelli will serve as bookends for the Nixa defensive line and could make for hectic nights for opposing quarterbacks.

“I can't wait until we play passing teams,” Speaks said. “We'll have two fast defensive ends rushing the quarterback. It should be a fun time.”

But not too much fun.