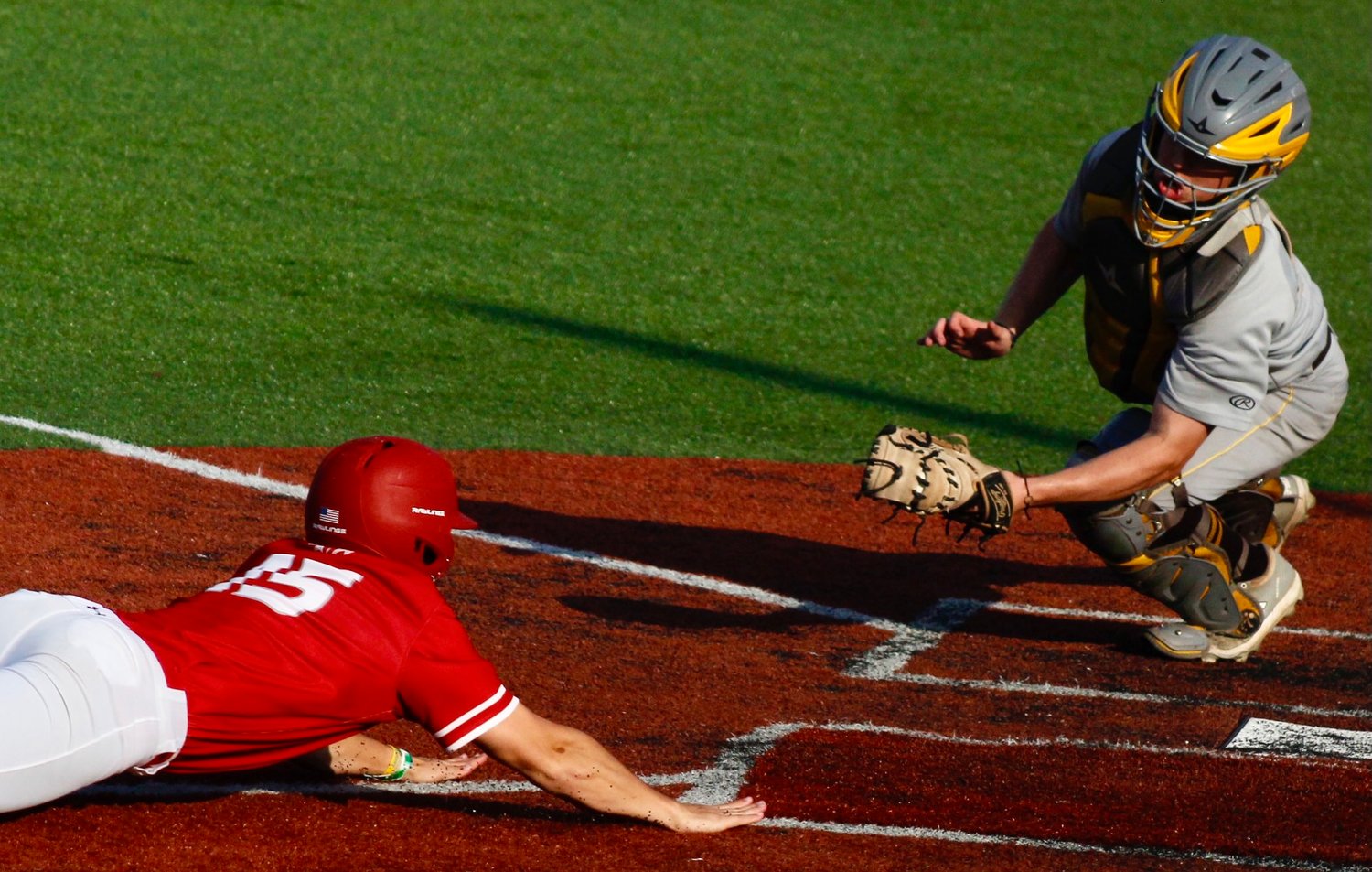 NIXA'S COLLIN USSERY slides toward a Kickapoo tag at the plate in the teams' matchup Thursday.
PAT DAILEY/Headliner News 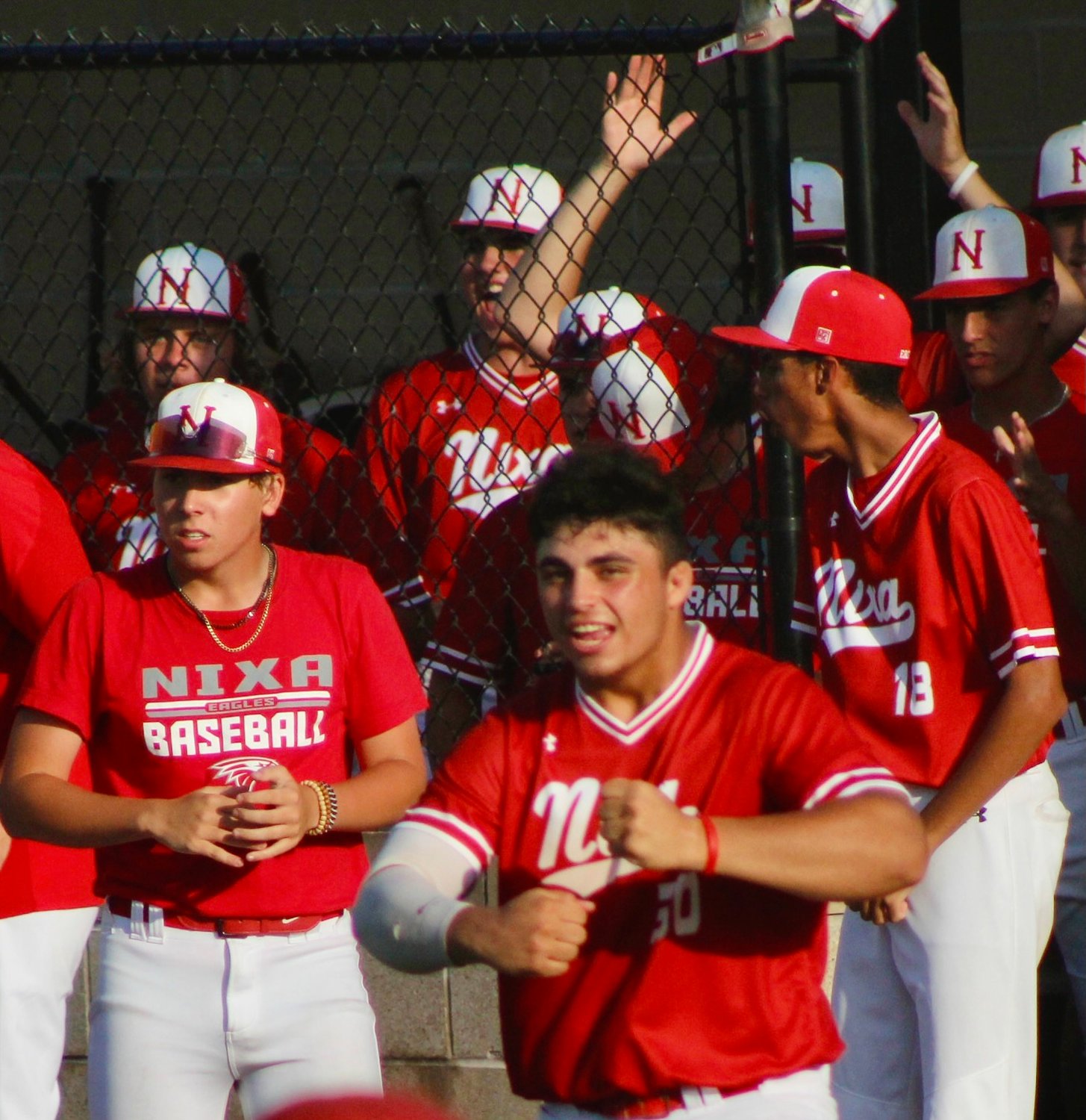 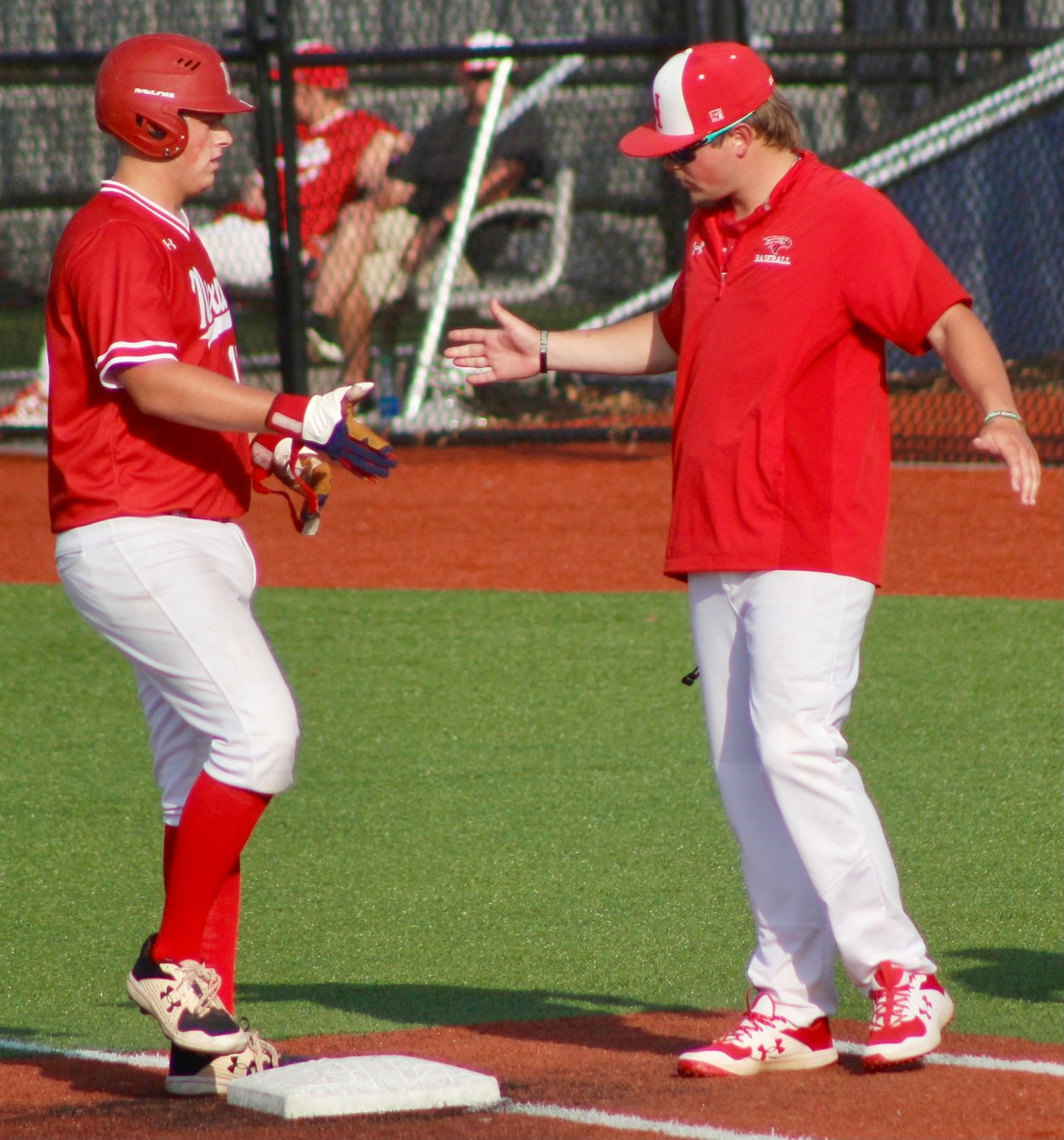 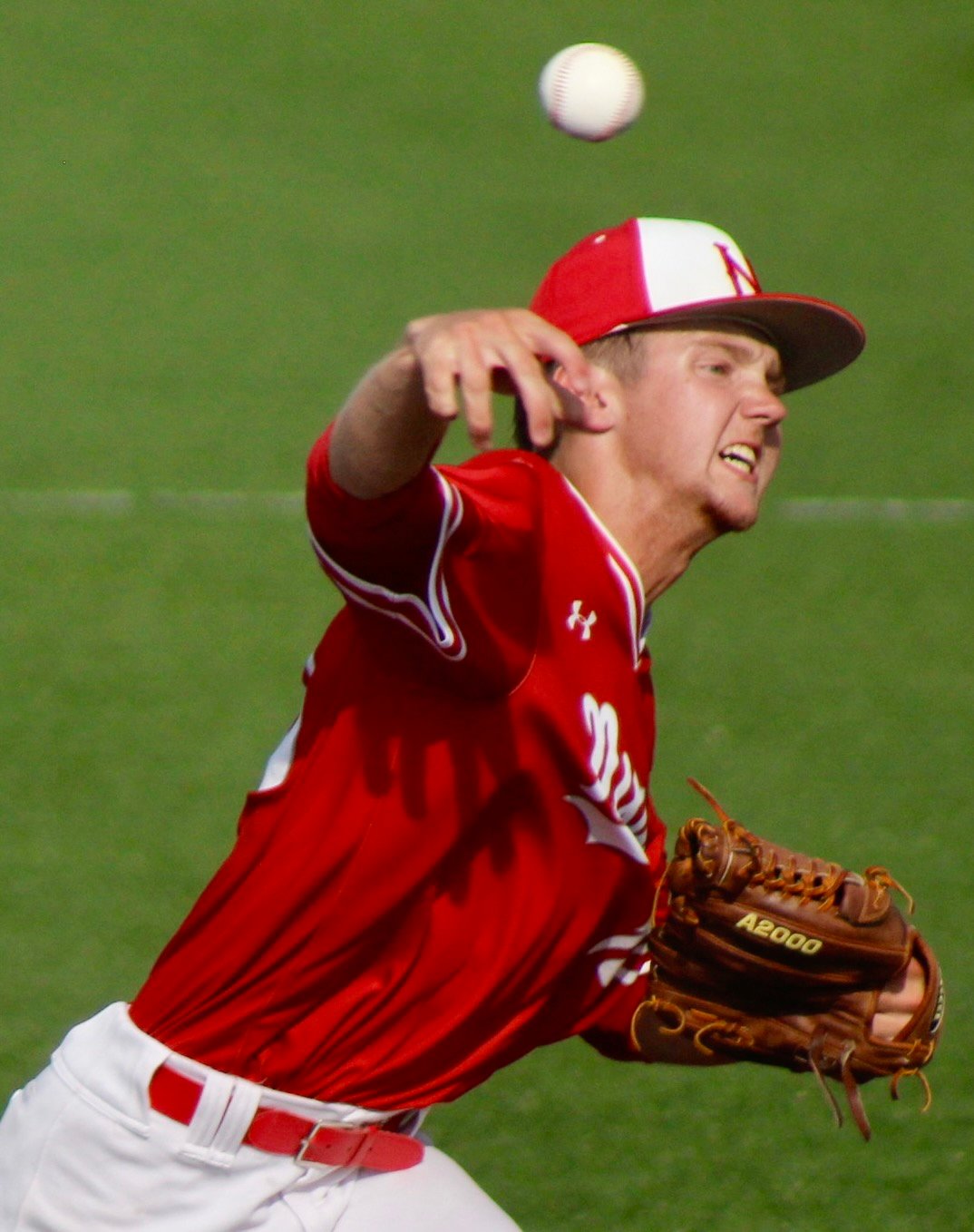 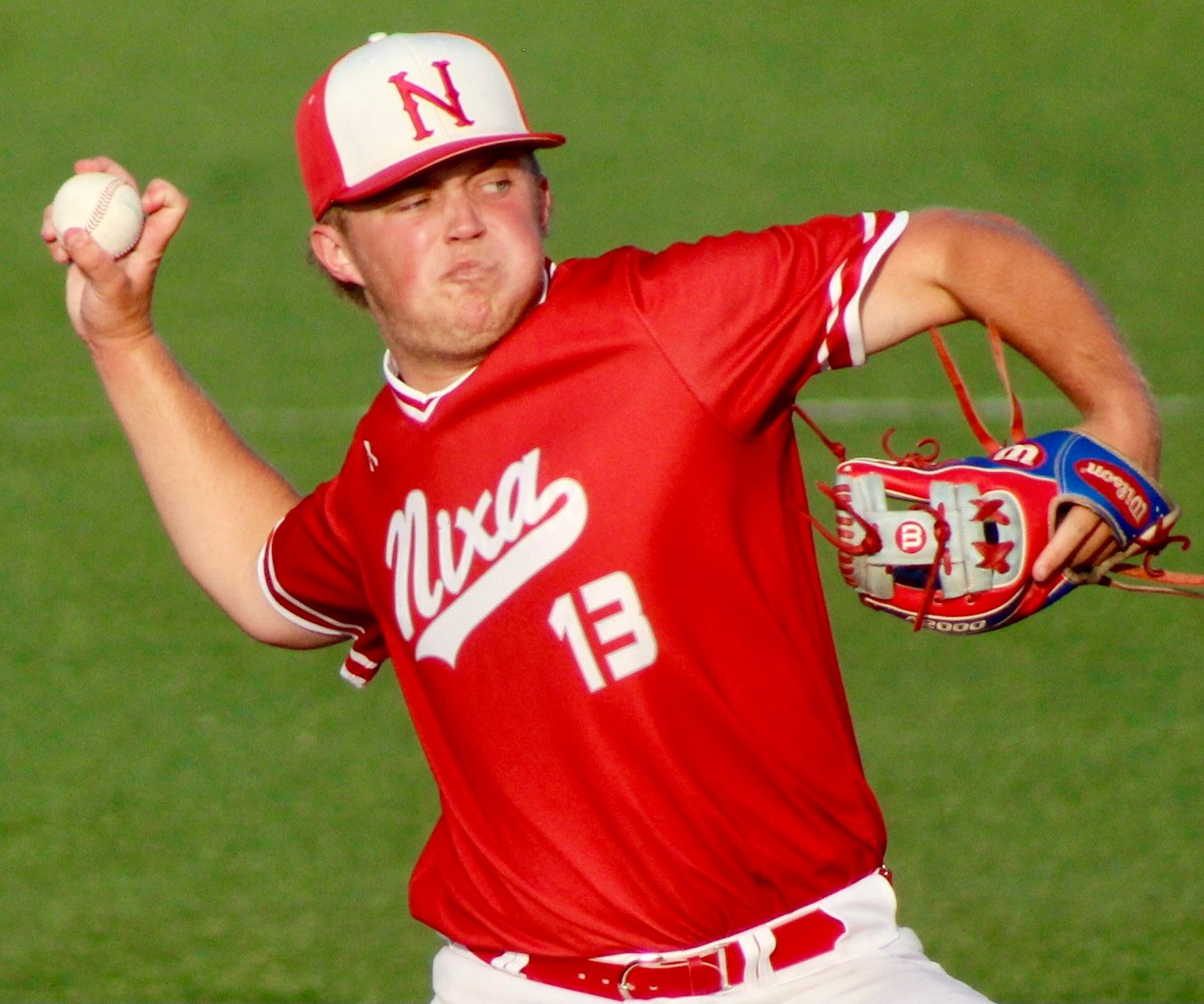 JOPLIN — A storybook season for Nixa with five walk-off hits and a school-record 32 wins ended Thursday at the hands of a pitcher having a storybook comeback in a fight for his life.

Nixa had no trouble putting the ball in play against Kubik, as he struck out only two. But the senior right-hander mixed his pitches wisely, leaning heavily on his curve ball and shut out the Eagles through the first four innings.

“He had good off-speed and was impressive,” said Nixa outfielder Sam Russo, who had an RBI-triple off of Kubik in the fifth inning. “I didn’t think he was going to throw today because he threw three innings Monday against Lebanon. But he stayed under 50 pitches and bounced back. I don’t think he touched 80 (mph) with his fast ball today. But he sure did a good job keeping us off balance with his off-speed and side-arm slider. Props to him.”

“He doesn’t throw very hard. When you consistently see hard pitching and then see someone who doesn’t throw hard, it’s tough,” first baseman Jaret Nelson said. “We didn’t make adjustments in enough time. Instead of making adjustments, I think we just got mad, me included. It was frustrating, everything was on the line. That was my last high school game. It’s easy to have a short fuse. A lot of us had that today and it didn’t help.

“I don’t feel like we should have lost,” he added. “It is what it is. Sometimes, you have to bite the bullet.”

Nixa (32-4) obviously doesn’t like to lose to Kickapoo anytime or anywhere. But if the Eagles had to see their season end, it hurt a bit less that it came against a player with the fight and heart of Kubik.

“Talk about the things that kid has went through,” Eagles coach Logan Hughes said. “It’s incredible the things he’s had to go through in his life. Hats off to him. He kept us off balance. We missed a lot of barrels. He’s a good pitcher. He was throwing curve ball and changeups in every count and then he’d throw a fast ball and we would be a little late because his last pitch was a changeup.”

Evans drew comparisons to Kubik because he, too, enjoyed an efficient evening on the mound without the benefit of overpowering stuff. Evans was pressed into service one out into the first inning and responded with a stint of 4.2 innings of one-run ball.

“I was ready and fired up,” Evans said. “I had a lot of confidence coming out, knowing the team I had behind me.”

Likewise, fellow reliever Blake Pendergrass shut out the Chiefs over the sixth and seventh.

“We had guys come out of the bullpen, and battle,” Hughes said. “You put those guys in there because you trust them and they trust themselves.”

Hughes went to his bullpen after starting pitcher Hardy Dougan hit a batter, walked the bases loaded and yielded a grand slam to Cael McCarville with one out in the first.

“Maybe there were a couple pitches here and there that could have went our way,” Hughes said, referring to a smallish strike zone the entire game. “Hardy battled. He’s 7-0 before today. We wouldn’t be in this spot without him. Sometimes as a pitcher and a hitter, it doesn’t happen.”

Kickapoo went up 5-0 in the second on an Anderson Underwood homer.

Nixa came back from a 4-0 first-inning deficit Tuesday in its semifinal win against Republic and the Eagles mounted a rally against Kickapoo in the seventh.

Designated hitter John Gholson led off the seventh with a solo home run.

“What was going through my mind was, ‘Hey man, hit the crap out of the ball,’” Gholson said. "I saw the ball and hit it.”

Gholson bounced back from a junior season in which he hit .186 to bat .286 in regular-season play this year. He had two homers in Districts.

“I went to coach Hughes at the beginning of the season and told him, ‘I can’t hit the ball. After last year, I’m not very confident at the plate. But I think I can help the team out pitching,’” Gholson said. “As I got into it a little bit, he trusted me and put me in the lineup. I was getting the job done here and there and believing in myself.

“But I could give really two craps about whether I did good or not. I care about how the team does,” he added. “I didn’t care what my role was on the team. I could have been sitting on the bench for all I care and if we were winning, I would have been totally fine with that.”

Caeden Cloud and Wyatt Vincent banged out hits against Vienhage, allowing the tying run to step into the batter’s box with two outs. But Vienhage cut short the comeback with a strikeout.

Earlier, Nixa had a runner thrown out trying to steal second and another runner gunned out at home trying to score on a sacrifice fly.  McCarville was sensational at third base, as Kickapoo was errorless.

“I thought we would make them pay for that switch,” Nelson said, referring to the Chiefs relieving Kubik. “But we didn’t. In that situation, you go run by run. Not even run by run, but pitch by pitch. Everyone has to win their AB and pass the stick. We’ve done that really well this year, but today unfortunately not as good.”

“I was thinking we were going to come back and win the game because that’s what these kids did all year,” Hughes said. “I’m so proud of this group. It hurts because I wanted it so bad for them. But we’re going to look back and understand that we did some incredible things.”