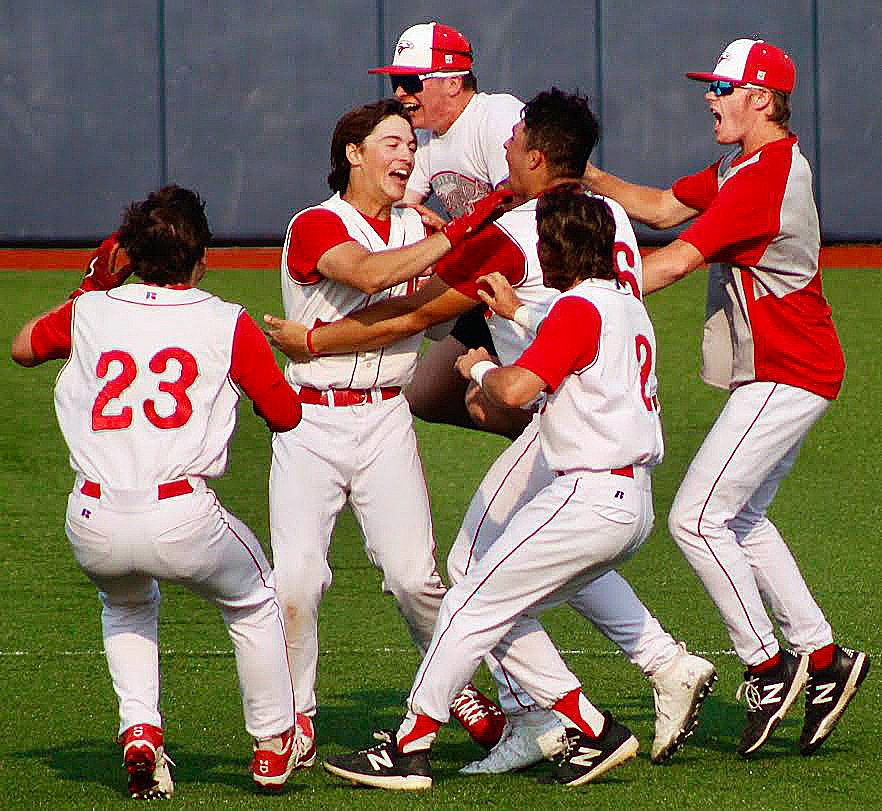 JOPLIN — Prior to this week, Nixa outfielder Sam Russo had never experienced the thrill of a walk-off hit.

All of a sudden, he now has two walk-off hits on the back of his baseball card.

Russo delivered a bases-loaded RBI-single with two outs in the seventh inning of the Eagles’ 5-4 Class 6 District 6 semifinal triumph against Republic on Tuesday.

“I had never hit a walk-off like that before,” Russo said. “Well, I had a run-rule walk-off against Central (in Nixa’s 12-2 six-inning win on Monday). That wasn’t the same as this.”

Indeed, the obligatory high-fives Russo received after Monday’s blowout were replaced by a hard-charging mob of Eagles headed toward him after Tuesday’s thriller.

Russo ran through first base during his game-winning infield single and found himself in shallow right field as Tanner Grant scored the winning run. When Russo saw his teammates racing toward him, he tried to retrieve by hurriedly walking backward toward center field. Once Nixa’s players caught up to Russo and hovered over him, he somehow kept his balance.

“Thank God. I was trying not to fall over,” Russo said. “Seriously, I wouldn’t have wanted to fall and have all of them fall on top of me. I would have been crushed.”

Nixa is 8-1 in one-run games, including two straight one-win wins versus Republic.

The Eagles’ perseverance was put to the test Tuesday., Republic jumped on top 4-0 in the first inning.

“That fist inning was atrocious,” Russo said. “But we had fire in our dugout. I knew we could come back and win.”

Winning pitcher Keith Piepmeier survived the Tigers’ first-inning fireworks. They continued to hit him hard in the second, but a line drive with a runner on second base was hit directly to Russo in right field to end the inning.

“That about gave me a heart attack,” Piepmeier said. “That scared me. But Sammy was there.”

If the line drive would have found a gap, Piepmeier’s day may have ended very early. Instead, he made it another memorable outing in a season full of sensational starts for the senior right-hander.

Piepmeier abruptly turned things around and finished with a four-hitter, while striking out eight and walking three.

Even when behind 4-0, he knew to keep his composure and try to find his curve ball.

“I trusted my offense and kept my head up,” Piepmeier said.

Once Piepmeier re-discovered the spin to his curve, Republic hitters were virtually helpless. The Tigers took defensive swings in a desperate attempt to avoid being out in front of an off-speed pitch. Piepmeier repeatedly kept them guessing, throwing his curve on any count.

“I don’t know how I pitched so badly in the first inning,” Piepmeier said. “Sometimes, it takes me an inning or two. If (the curve ball) is not working, I go down to the bullpen and practice throwing it.”

If there had been an eighth inning, Piepmeier was headed back to the mound. He was still a ways away from MSHSAA’s maximum pitch-count of 105.

“I probably threw 30-some pitches in the first inning,” he said. “But I ended up with 94 pitches. I was going to go back out there with 11 pitches.”

“Keith came back and responded,” Grant said., “So did our team. After taking a hit in the mouth, we had to fight back. This team always fights back, gets something going and finds a way to win. That’s the great thing about this team.”

Nixa’s comeback against Republic pitcher Gavin Beckner started in the second, with first baseman John Gholson belting a solo home run. It was Gholson’s second homer on the season.

The Eagles tied things up with a three-run fourth that saw Russo stroke a two-run single and Rylan Michel add an RBI-double, both with two outs.

Russo was 3-for-5 with three RBIs.

“I love curve balls. I hit them pretty well,” Russo said. “He was a good pitcher and had a pretty sharp curve ball. But it was almost always in the dirt. So, I was going to try to lay off of it.”

Nixa’s half of the seventh began with Grant producing a single on a grounder up the middle.

“I was ahead in the count. I knew he was going to give me a fast ball,” Grant said. “I was sitting on that and trying to start something. I was trying to keep it simple. Put a good swing on it and make something good happen.”

On a Nixa strikeout for the first out, Grant stole second base. He was safe by the narrowest of margins.

“It worked out,” Grant said. “I thought I was going to get punched out, but I think I was under (the tag).”

Grant, a junior, already has the build of a college power hitter, but has decent speed. His stolen bases count is up to 16.

“I get great reads, that’s all it is,” he said. “You don’t have to be the fastest to steal bases. Get a good jump and go as hard as you can.”

Walks to Ryan Retone and Wyatt Vincent loaded the bases with two outs. Vincent walked three times on the day.

Up stepped Russo, who admittedly felt pressure. But upon reviewing the situation, he put himself at ease.

“I was kind of nervous, a little jittery,” Russo said. “But I felt most of the pressure was on the pitcher. I was relaxed. He had to get me out or they lose. After that, I didn’t think about anything, kind of like TV fuzz going on in my head.”

Nixa and second-seeded Kickapoo (26-7) will tangle in Thursday’s 5 p.m. final.

It’s a much-anticipated title tilt between arguably the two best teams in southwest Missouri. The Eagles and Chiefs have not met, with their regular-season meeting being rained out.

“I wish we would have played them in the regular season,” Russo said. “I guess they didn’t re-schedule us. I’ve heard they’ve been in a little hitting slump. But I think they’re bouncing back.”