Familiar script, Nelson and Eagles rebound from loss and gain revenge on Tigers 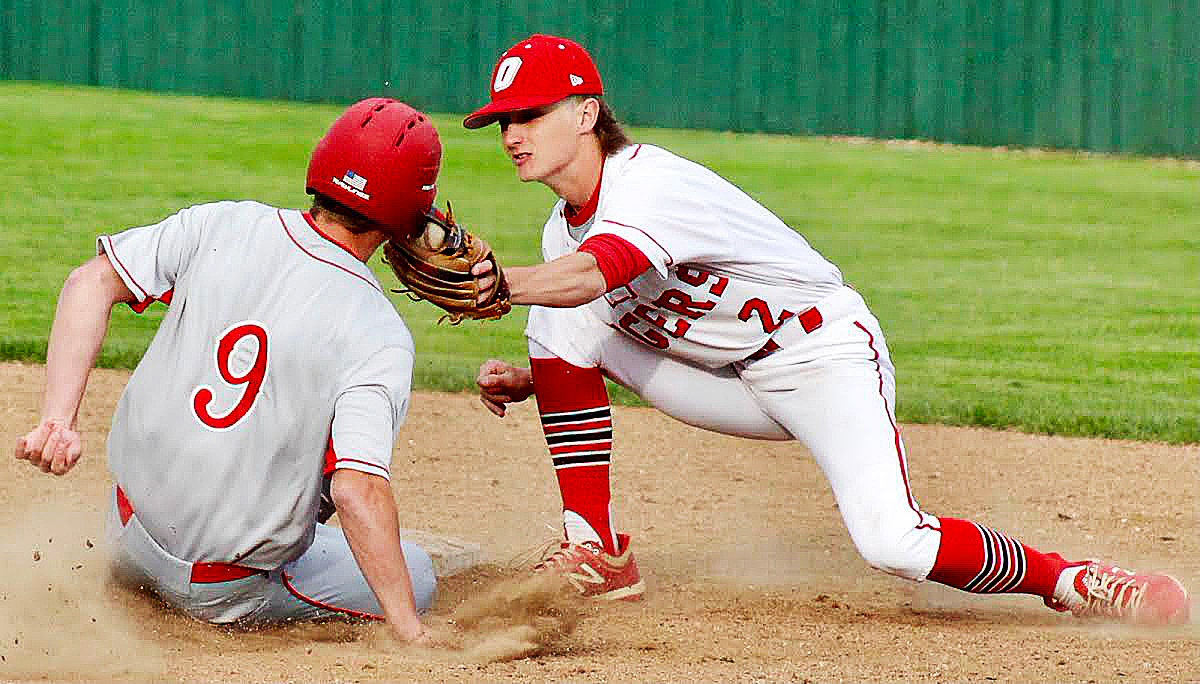 For Nixa catcher Jaret Nelson, whether it be basketball or baseball, there’s something about the combination of being in bounce-back mode and a matchup with Ozark that brings out the best in him.

A few days after the Eagles suffered their first loss this spring at the hands of Rogersville, Nelson was 4-for-4 with four RBIs Tuesday in their 7-2 triumph against the Tigers.

Likewise, a couple days after Nixa’s hoopsters were blown out by Blair Oaks over the winter, Nelson scored 17 points in an Eagles win at Ozark.

In between the losses to Blair Oaks and Rogersville, Nelson was part of a stretch of 28 Nixa wins in 29 games covering basketball and baseball season, with the lone loss being in the Class 6 state championship basketball game.

“People can say whatever they want about how you can’t win them all. But losing is embarrassing,” Nelson said. “A lot of people when they get embarrassed, they shut down and turn into a dog. But I think we put nine guys out on the field who feel the same way. I can speak for everybody in the dugout, I hate losing.

Nixa was 0-for-2 against Ozark last season, losing 14-5 to the Tigers in the regular season and 6-1 at Districts.

“It’s a rivalry, but at the end of the day we’re just trying to win,” Nelson said. “Anytime a team beats you, it automatically turns personal for the next time you see them. A lot of our guys who are playing this year didn’t experience (those losses) last year, but they still came out with the same fire today that we did.”

Nixa (17-1 overall and 3-0 in the COC) took a 6-0 lead against Ozark ace Brody Baumann by plating four runs in the first inning and two more in the second.

Winning pitcher Keith Piepmeier threw a five-hitter while striking out five and walking one. He fired a strike on 73 of his 107 pitches.

After giving up RBI-singles to Ozark’s Greydon Miller and Devyn Wright in the Tigers’ two-run second, Piepmeier shut them out over the final five frames.

In Nixa’s win versus Willard last week, Piepmeier blanked the Tigers over the final four innings.

“I really don’t have an answer for that, I just do it,” Piepmeier said about getting stronger as a game goes along.

“One thing about Keith, people think they can get to him in the first one, two or three innings, but I promise you he’s going to get stronger throughout the game,” Nelson said. “I knew by the fourth inning tonight he was going to come out ready to go, same as the Willard game.”

“He’s a bulldog, the kid’s a winner,” Nixa coach Logan Hughes said of Piepmeier. “He competes his tail off. He trusts the guys behind him, which is evident because he puts a lot of people in play. They put some balls in play today and we made great plays to help him out.”

Piepmeier was effective, despite his curve ball not having quite as much bite to it as he would have liked.

“It wasn’t breaking as much as it did against Willard, but it still did the job,” he said.

Hughes hopes his players learned the importance of a killer instinct from their loss to Rogersville. Nixa let leads of 6-0 and 8-3 slip away in its 9-8 defeat.

“We’ve been close several games to coming out on the wrong end and we found a way to win,” Hughes said. “That time, though, we didn’t play well enough. We walked too many guys, we didn’t compete early in the strike zone and got into some hitter’s counts for them and they put up some good hits. It was a lot of stuff we can learn from.”

For Ozark (11-6 and 2-2), the relief work of Brady Dodd and Hudson Kissee stood out. They held the Eagles to one run over the final five innings.

Even as the oldest son of a legend, Elliott on his way to making a name for himself