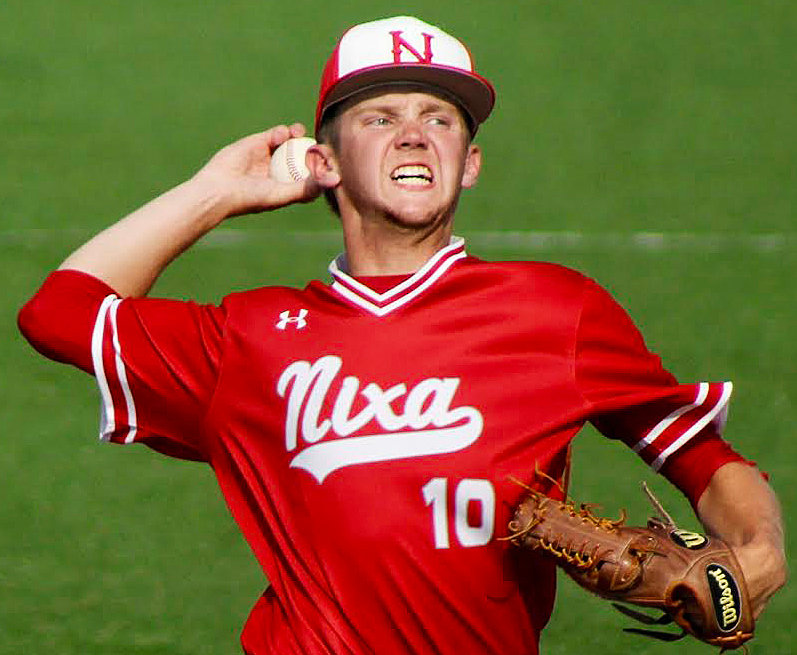 NIXA'S RYLAN EVANS will return for his senior season next year, after posting a 4-2 W-L record this year.
PAT DAILEY/Headliner News
Posted Monday, May 23, 2022 12:00 am
PAT DAILEY Sports Editor patd@ccheadliner.com

Rylan Evans anticipates he and his Nixa teammates will be more motivated than ever in response to the Eagles’ Class 6 District 6 final loss to Kickapoo last week.

Evans provided himself a strong boost of momentum and confidence heading into the summer. He hurled 4.2 innings of one-run relief against Kickapoo.

“He’s got some really good stuff and learned a lot about himself,” coach Logan Hughes said.

He knows he’s not the overpowering type, but would like to add a bit more bite to his fastball.

“I’ll stay sharp during fall ball and during the winter we have a great facility and a bunch of resources,” Evans said. “I’d love to pick up velocity. But I know you don’t have to throw 90 to get strikeouts. I’m throwing 80-83 mph. I would love to come into the season at 85-87, that’s my goal for next year.”

Evans will be among a handful of key contributors from this season’s 32-4 squad who will return. Also due back are third baseman Tanner Grant, catcher Jack Edwards, second baseman Rylan Michel, center fielder Wyatt Vincent and left fielder Caeden Cloud.

“We’ve got a lot of great guys coming back who are going to be hungry,” Hughes said. “We have to use this feeling (following the loss to Kickapoo) to fuel us in the future. It hurts. Hopefully, guys will remember this feeling when it’s time to work again.”

Nixa’s junior-varsity was 13-6 this year and its freshman team was undefeated.

“They’re great. I can’t wait to mentor them,” Evans said. “I’m going to try to be there for them as much as I can because we’re going to need some dogs if we want to win State.”

“The senior class this year has set a standard that we’re going to build off of,” Hughes said. “I’m proud of the senior group for creating a culture that I think is going to last many years. We’re happy about the future.”