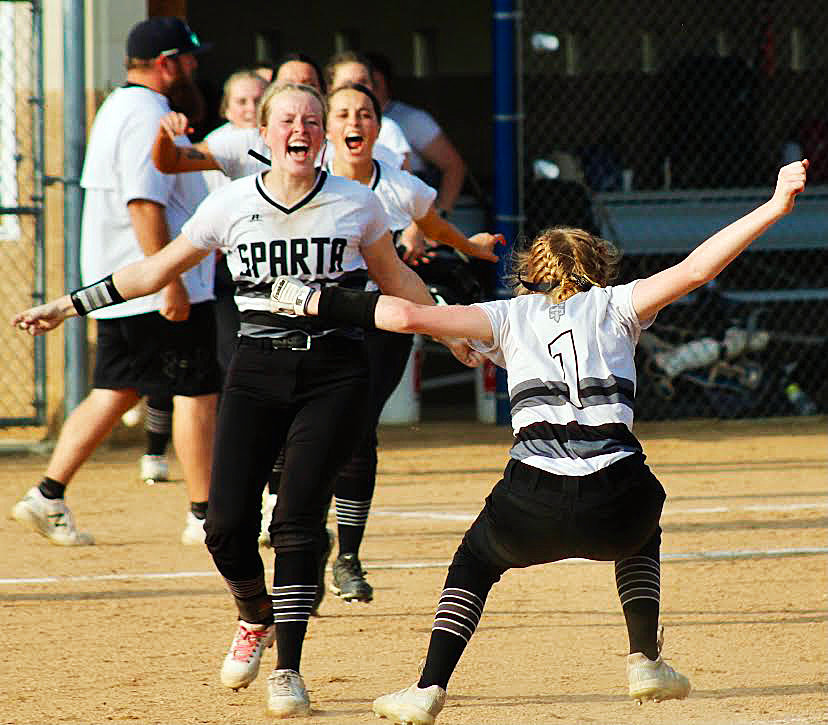 Nothing can seemingly bring Mya Fulton to tears quicker than the prospect of not having her older sister, Aysha, as a Sparta teammate ever again after this season.

“She’s been preaching that sentiment all season,” Sparta coach Troy McPherson said. “On ‘Senior Night,’ she was a ball of tears. Poor little thing.”

Mya, all 5-foot-4 of her, helped give Aysha at least one more game in a Sparta uniform by delivering a game-ending two-run single in the Lady Trojans’ improbable 6-5 Class 2 District 5 semifinal win versus Forsyth on Tuesday.

Fulton’s one-out single capped a four-run Sparta rally in the seventh. She scored Averi Leyland with the tying run and McKenzie Wilson with the winning run.

“Mainly, I was thinking if we lost, it was my sister’s last game and I didn’t want that to happen,” Mya said. “Once I got to first base and realized Kenzie scored, I almost started crying.”

“I was 100 percent crying,” pitcher Natalie Wilks said of the ensuing Sparta celebration in which the Lady Trojans mobbed Fulton.

“I was so nervous, but knew we could pull it off,” Wilks added. “I believed in everybody. We were all praying. I’m glad Mya did it for us.”

Fulton’s heroics were preceded by an Abbi Crocker lead-off single, a Megan Brown double, Leyland reaching on an error and walks by Wilson and Madeline Brown.

Wilson was walked intentionally with Leyland representing the tying run at second base.

Wilson ended up being the winning run, but McPherson agreed Forsyth’s call to put her on base. Wilson is hitting .514 with four home runs and 33 RBIs.

“I 110 percent would have done the same thing.” McPherson said. “Kenzie is a nightmare. I wouldn’t want to face in her in that situation. I told the field umpire when (Forsyth) did that it was the right call. Kenzie has been hot and has been one of our best hitters all year.”

That brought up Madeline Brown, who fouled off seven pitches, before taking ball four on a 3-2 count to load the bases.

“All the crowd and our dugout, none of that was in my head. I was there talking to myself and bringing myself through it,” Brown said. “(Crocker) had a saying before the game, ‘Be Awesome, Do Awesome.’ I kept reading that in my head.”

Brown’s repeated foul balls only added to the drama.

“I was thinking, ‘You’ve got another life, you’ve got to keep going,” she said. “I tried to relax as much as I could, but I was very nervous. I knew my team was depending on me.”

“It felt like it was going on forever,” Fulton said of Brown’s at-bat. “I thought it was never going to end.”

“That was the at-bat of the game,” McPherson said. “That’s what we needed in that moment. She fought so hard for that walk. Her fighting was huge.”

Fulton then jumped all over a 1-1 offering and ripped a line drive to left field.

“I felt like if I wasn’t aggressive, I would let my teammates down and I didn’t want to let them down,” Fulton said. “It takes a lot of stress off of me when I’m aggressive and just let go.”

Fulton has three hits and three RBIs thus far in the post-season, after having just seven RBIs all of the regular season.

Sparta’s offense was kept in check by Forsyth pitcher Lindsay Essary through six innings, with the Lady Trojans grounding out seven times, including into one double play.

“Too many ground balls,” said Megan Brown, who had two doubles among her three hits. “It wasn’t really a drop ball. I think it was a gravity-drop, which made us roll over. Toward the end of the game, though, we started catching on to her.”

Forsyth led almost the entire way. The Lady Panthers struck out 12 times against Wilks, but banged out nine hits. Wilks’ WHIP on the season is 0.843 and she allowed only nine hits or more twice in the regular season.

“Some of them didn’t get the rise ball,” Wilks said. “They adjusted to some of my pitches inside and outside.”

After Essary hit a changeup for a double in the second, Wilks threw only five changeups the rest of the game.

“The changeup wasn’t a big factor,” McPherson said. ‘They stayed back on it very well. A lot of teams don’t stay back very well. She also wasn’t spotting it very well. When that doesn’t work, we have to work with whatever we’ve got.”

“I haven’t thrown many changeups this year,” Wilks said. “I’m trying to get them with the rise ball.”

Forsyth took a 5-2 lead in the top of the seventh on a bases-loaded walk.

“There are lot of games when Natalie steps off the bus, we’ve already won,” McPherson said. “This wasn’t one of those games. Forsyth is a great team and they play their best in high-pressure situations.”

“We rely on Natalie a lot and she’s always doing good things for us,” Fulton said. “This showed even when Natalie struggles everyone else can step up and pick her up.”

The Lady Trojans (22-2) will look to ride their momentum to a District championship. They will meet host Clever (15-10) in the final today at 4 p.m.

“This was so stressful. We were all about having anxiety attacks. I was at shortstop praying,” Megan Brown said. “We’re all so competitive. We weren’t ready to go home. We gave it everything we had and encouraged each other more than ever. We had people who were willing to step up.”