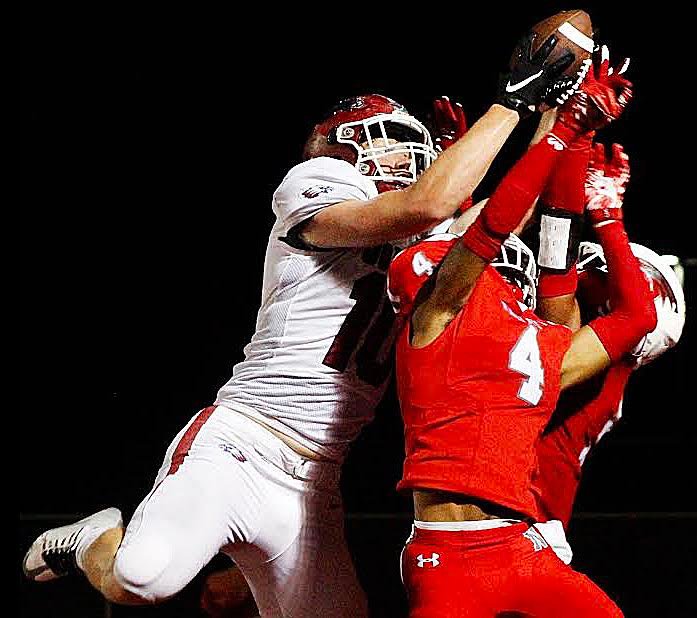 One long year later, Ramone Green concedes that perhaps things worked out how they were supposed to, after all, in regard to his broken collarbone that cost him most of his junior season last year.

Nixa's 49-35 triumph versus Joplin on Friday, his career-high 301 yards rushing and career-best six touchdown runs did a whole heck of a lot to help him come to that conclusion.

It's official, Green has waved bye-bye to the bitterness that ate away at him from sitting out nine games last year. Only five games into this season, he has said hello to the 1,000-yard mark. He already has 1,065 yards on 103 carries (10.3 avg).

"Life gets to you sometimes. But I think (the injury) built who I am today," Green said. "I had to shake it off and work to get to this point."

"I wouldn't have thought that (was possible) a couple years ago. I didn't think we would be here, but we are," offensive lineman Garrett Davidson said.

Nixa (5-0) has only one team with a winning record on its remaining slate. A COC championship would be Nixa's first league title since Webb City and Carthage joined the loop in 2008.

"This one was really personal to me," Green said.

This one was all about Green all night. He helped put Nixa up 21-0 by accounting for two touchdowns in the opening quarter. He had at least one touchdown in each quarter. His 41-yard score with 2:22 to play basically clinched the outcome.

"That was kind of an exclamation point," Green said. "That's how we finish games."

How the first half finished eventually became a distant memory, but initially caused concern. Joplin had rallied to make it a 28-21 ballgame at the half and Green headed to the locker room walking in a manner that can be best characterized as gingerly.

Turned out to be nothing for Nixa fans to worry about.

Green being in uniform this time around wasn't the only reason this Nixa-Joplin showdown bore absolutely no resemblance to their playoff meeting last year. Joplin's defensive line and tackle Donovahn Watkins dominated the teams' District semifinal matchup, a 27-13 Joplin win. But with Watkins having graduated and signed with Coffeyville (Kansas), Nixa's offensive line turned things around in a big way Friday.

As the game went along, the surge created by the offensive line repeatedly pushed back Joplin's defensive line by at least five yards.

"Last year, (Watkins) shut down our running game by himself. We couldn't block him," Nixa coach John Perry said. "You can turn that around tonight. Our offensive line is much improved and was the difference in the game. Ramone could probably make a lot of offensive lines look good. But Ramone would be the first to tell you he doesn't do much without those dudes. They were really good tonight."

The offensive line earned respect from both sides.

"They work so hard. I'm glad people are starting to recognize them," Green said. "They're a great group of guys. I love going to work with them every single day."

"From a defensive standpoint, their offensive line is big and they pull a lot," Joplin linebacker Drew VanGilder said. "They're very good at what they do."

The linemen were happy to voice pride in their performance.

"This was probably our best week of practice (and) as a unit this was our best game," Davidson said.

"We were knocking everybody off the ball," lineman Landon Carson said. "We were dominating the front line, no doubt about it. We had one goal in mind and that was to score on every drive. We knew what we had to do and went out and performed."

Nixa didn't quite score on each of its possessions, but answered Joplin's challenges by continuing to push its lead to 14 points in the second half.

"Defense was optional tonight," Perry said. "It's tough when you feel like you have to score every time you have the football. I felt that pressure because we could not stop them. But they are really good on offense, too."

"Adversity is going to happen. We're not going to win every phase of the game," Green said. "They have a very good offense with great running backs and great receivers and a huge offensive line. Our defense was struggling a little bit. That's okay, our offense helped and it's a team sport. We knew we were going to have to pick up the defense."

One of the few defensive stalwarts for either side was Nixa defensive end Jayden Anthonelli. He knocked down a Joplin pass on a fourth-down stop in the second half and upped his season sacks total to five.

"He had the athletic ability to make big plays in cricual situatons," Perry said.

Nixa was minus safety Jake Miller.

The offensive fireworks have many looking forward to a possible rematch between the teams in the Class 6 District 3 semifinal or final rounds in November.

"I'm expecting to see them again this year," VanGilder said.

"We'll do it again," Carson said. "It's not going to happen like last year where we lost to them in (Districts)."

No regrets: Eagles proud of accomplishments and effort