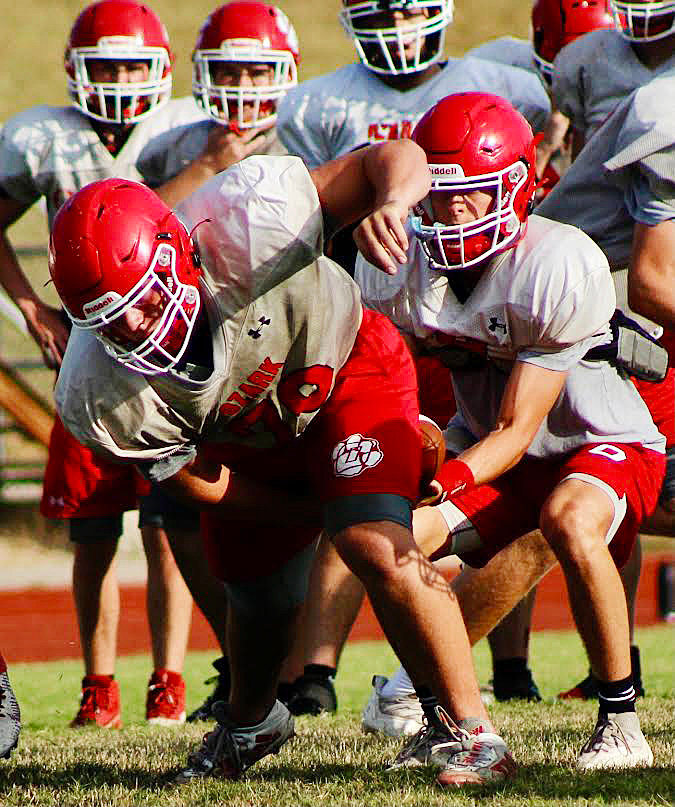 Peyton Greer is prepared to join the likes of Ozark grads Jayce Gorn, Garrett Sutherland and Hunter Tennison as Tigers linemen to start and/or play extensively on both sides of the ball.

Greer, a guard and center for Ozark the past two seasons, will add nose guard to his duties as a senior this year.

Gorn, Sutherland and Tennison are the only former Tigers linemen to start on offense and defense during coach Chad Depee’s eight years at Ozark.

“It's awesome to be in that select group,” Greer said. “To know those are the people who have done it before me and now I get to be the next one, I’m super excited about it.”

Greer was a teammate for two years with Tennison, a 2021 Ozark grad, in both football and wrestling. They were often practice partners on the mat.

Tennison served as an inspiration to Greer.

“I’ve known Hunter for a while. I got to see him destroy people on the football field and on the mat,” Greer said. “He's a towering beast and one of the hardest workers I've ever known.”

Tennison was a state heavyweight champion his senior year. Heavyweight is where Greer is likely to wrestle as a senior. He competed at 195 this past winter, but over the past five months has gained 45 pounds.

“In wrestling, I cut quite a bit of weight,” Greer said. “But as soon as wrestling was over, I gained a lot of muscle. Ozark gives you tons of opportunities to be in the weight room. I took advantage of every single one. I gained a lot of my weight from that. I also definitely ate more.”

It will be surprising if Greer gets back to 195. But he has done well cutting weight in the past.

“It's honestly not too bad,” he said. “First, you have to give up soda. That's my weakness. But as soon as give that up, you get used to it. Also, in football and wrestling, you're talking about being with a family. So, every moment where you feel like you want to eat something, you remember you're doing it for your brothers.”

This is the biggest Greer has ever been.

“I’ve got to get used to this new weight,” he said.

Greer is counting on his added weight to help him keep from getting worn down by playing both offense and defense opposite the COC’s biggest and baddest dudes. He’s confident his conditioning will pay dividends.

“When you play offense, you play 5-10 minutes and then take a little break,” Greer said. “I’m going to have to get used to never taking that break. I have to keep going and going. I know I can do it. I feel really good.

Wrestling has helped me with it,” he added. “You condition all the time in wrestling.”

Ideally, Depee would like for his linemen to play on only one side of the ball and he will try to sub for Greer on occasion.

“We've done our level-best to try to two-platoon those guys,” he said. “If Peyton’s not two-way, he will at least be one and a half-way.”

The Tigers had more depth on the defensive line a year ago, otherwise Greer may have played nose guard as a junior, as well.

“He’s been a mainstay on offense for us for two years,” Depee said. “We expect him to anchor our offensive line and now we are pushing him in new territory on the defensive side. We have spots to fill, so we are leaning on him there now. Maybe in a different setting he would have been in the mix there last year. Our needs this year call for him to have to step up and use his skills to potentially go both ways in the trenches in a tough league. We're excited to see what he gets done.”

For Greer, it’s a dream scenario.

“I try to take every opportunity I can get and this is one of the best opportunities I've had,” he said. “I’m super excited. It's going to be an awesome season.”