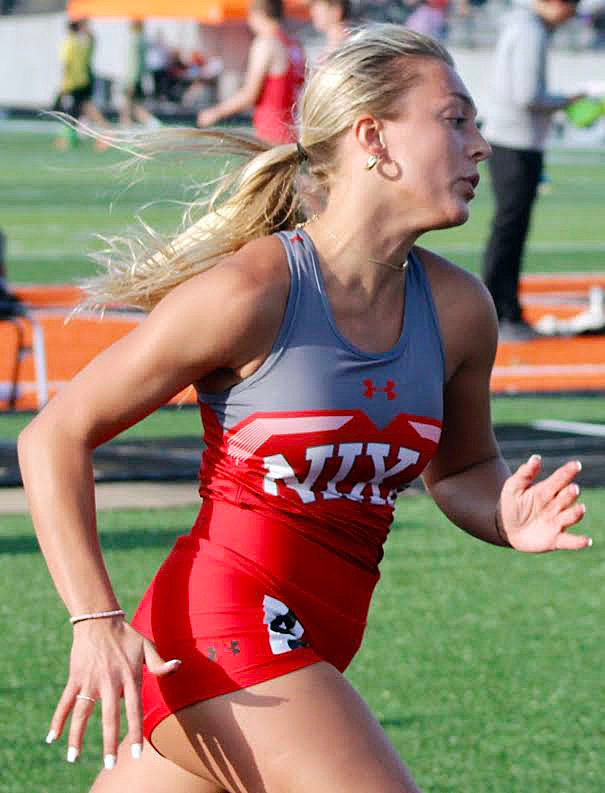 NIXA’S ALI KAMIES races to a win in the 200 at the Republic Relays.
PAT DAILEY/Headliner News
Posted Sunday, May 1, 2022 12:00 am
PAT DAILEY Sports Editor patd@ccheadliner.com

Even with track being her secondary sport, Nixa’s Alie Kamies has collected her share of firsts during her brief career.

Kamies, who won both the 100 in 13.35 and the 200 in 27.8 at the Republic Relays last week, is in only her second full season running sprints. She made State in her first go-around as a junior last year.

“In junior high, I was playing both volleyball and basketball and it was just too much (to do three sports),” Kamies said. “When I decided not to volleyball my freshman year, I thought, 'Well, I might as well try track.'

“I didn't run the first half of the season because of a hip flexor,” she added. “It took me a while to adjust to a new sport.”

“I kind of just go out there and try to run as fast as I can,” she said. “I don't have the experience most of these people have.”

Kamies figures she inherited her natural talent as a sprinter from her mother, Krisan.

Kamies is teaming with Brooklyn Bidinger, Camila Figuerora and Taylor Hopper to form a 4 x 400 relay capable of making a run at State.