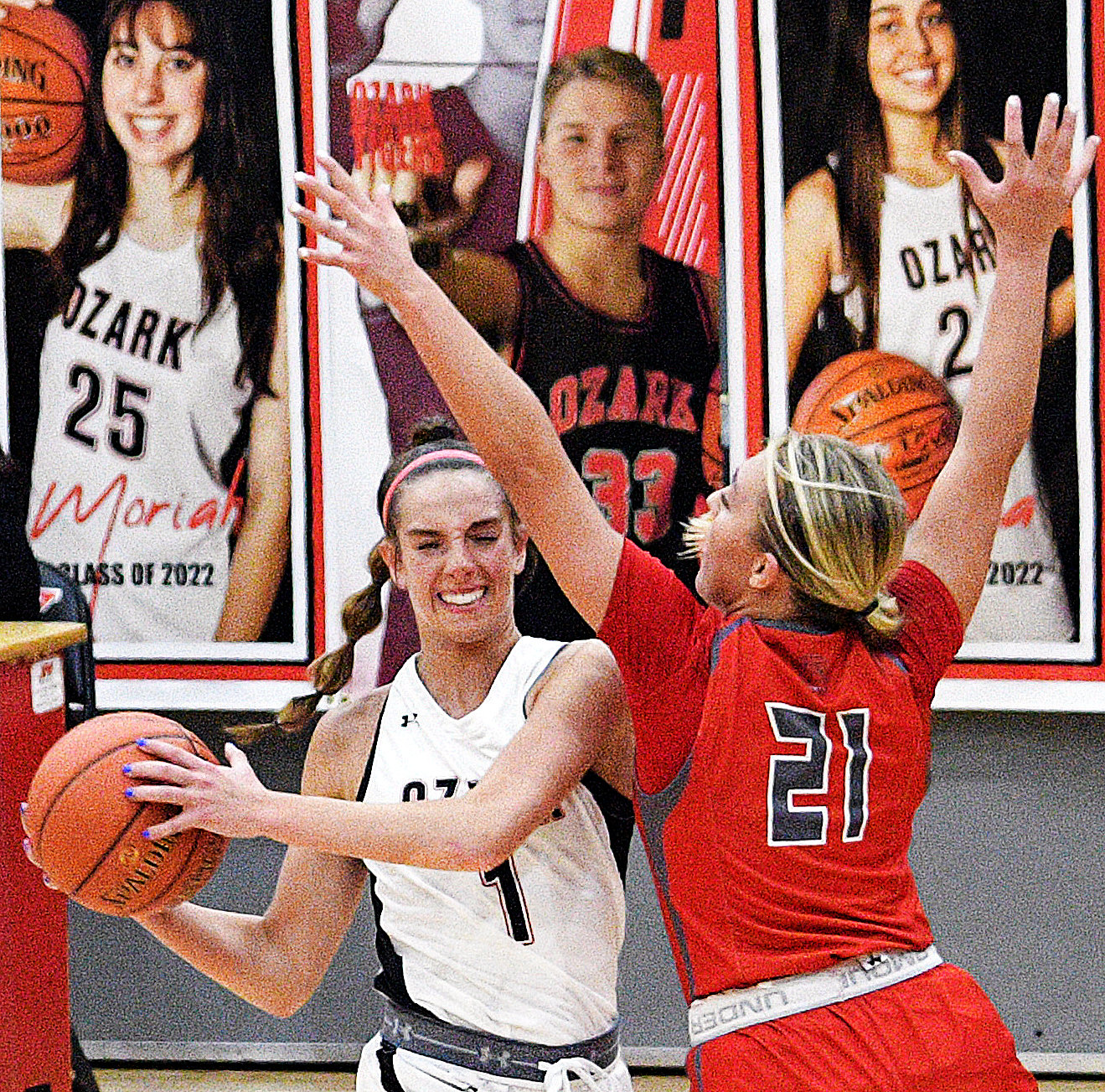 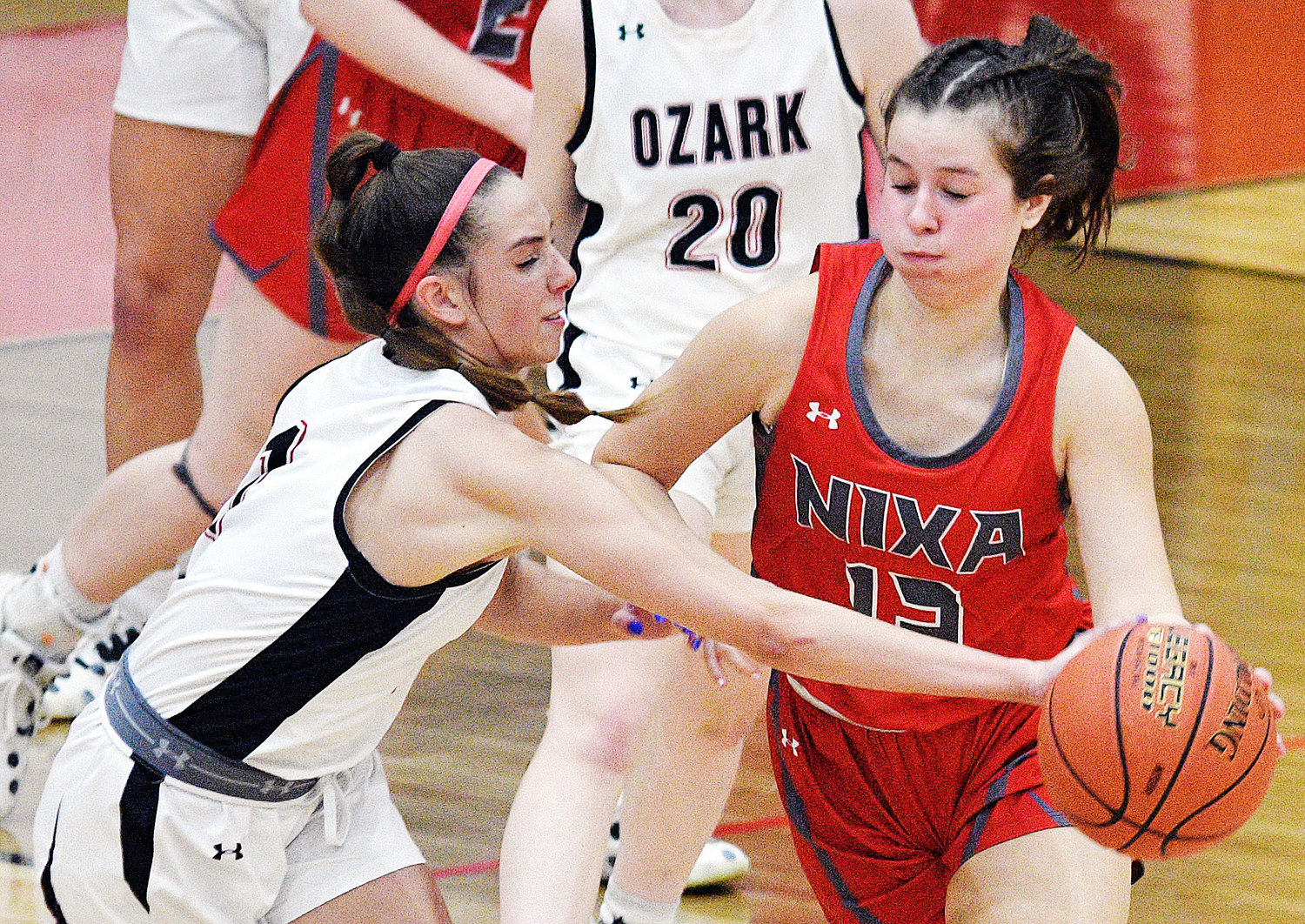 Ali Kamies came to play Monday. The Nixa forward fired in a game-high 21 points to power the Lady Eagles past Ozark 58-44.

“It’s a big game and I felt good,” Kamies said. ”I was very fired up, especially since I’m a senior and it may be my last time playing them.”

Kamies brought along both her 3-point shot and mid-range jumper, a combo few perimeter shooters possess. By occasionally taking a couple dribbles and shooting from 8-10 feet out, she kept Ozark defenders from jumping out at her when she received the ball at the 3-point line, thus creating open 3-point opportunities.

“I try to mix it up. I think if you mix it up a little bit, (defenders) don’t really know what you are doing,” Kamies said. “That way, you can always be a threat to the defender. It keeps them on guard because they know you can go either way.”

“They all seemed hit that low-percentage shot in today’s game,” Ozark coach Doug Hepler said of the mid-range jumper. “That’s a lost art. When anybody is making that kind of shot with consistency, they’re hard to beat.”

Nixa (16-4 overall and 3-0 in the COC) has won three straight in the teams’ series and was favored Monday, but things looked like they could go either way early on. Ozark (12-5 and 2-1), which had won 10 straight, jumped out to a 19-12 lead a couple minutes into the second quarter.

The Lady Eagles briefly unleashed full-court pressure to come back and take a 26-24 halftime lead. They didn’t press in the second half, but their defense still factored prominently.

“If we pushed the tempo and played good defense and play as a team, we knew we would be fine,” Kamies said.

The Lady Tigers committed 21 turnovers and often took difficult shots with a hand in their face.

“They exposed some things we need to work on,” Hepler said. “We turned the ball over too many times to give ourselves a chance. We’ll go back to the drawing board and work on that.

“Nixa put themselves in position to be at the top of the conference,” he added. “Now, we’ve got to take care of business and hope somebody can help us down the road.”

Moriah Putt, who scored 26 points in the teams’ last matchup, was held to eight.

“It’s a good matchup I look forward to and it’s fun to compete,” said Nixa center Norah Clark, who took turns with Macie Conway defending Putt. “I look forward to defense as much as offense. I need to effective on both sides of the floor.”

Nixa broke the game open by outscoring Ozark 14-4 to close things out.

“We picked it up as we figured out their matchup zone,” said Clark, who had nine points. “It’s a little strategic. We had to attack the zone in the right way and we got good shots toward the end. That’s what won us the game.

“They put up a good fight like they always do, but we came out with the win,” she added. “Seeing them beat Kickapoo (last week) gave us a little more motivation to come out on top tonight.”

Kamies, Conway and Putt are club ball teammates and will be college teammates at Rockhurst.

“I love her and it was a friendly game,” Kamies said of Putt. “No hard feelings hopefully.”