Knatcal feeling good about gains in his throwing motion and velocity 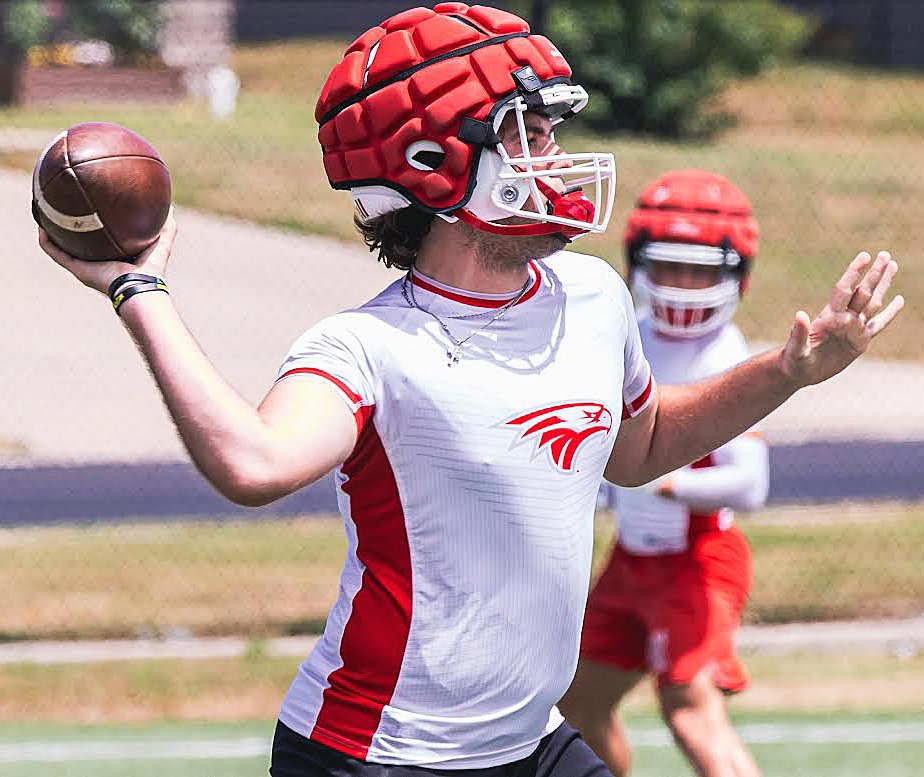 Connor Knatcal doesn’t need to be reminded of Nixa coach John Perry’s penchant for pulling the proverbial trigger and making a change at quarterback.

In Perry’s two seasons leading the Eagles, he has started three quarterbacks and didn’t hesitate to insert sophomore signal-caller Nate Uber behind center in the Backyard Brawl a year ago.

Perry will go with the hot hand, with no looking back.

Knatcal is fresh from a breakout junior season in which he completed 121-of-220 passes for 1,810 yards. But he reports he’s just as motivated to prove himself as a veteran starter this summer as he was as an aspiring backup a year ago.

“My mindset is the same,” Knatcal said. “I’m trying to get better and better. I'm not worried about, 'Oh, I've already done this.' It's nice to have the luxury of knowing what I did last year. At the same time, last year was last year. I'm focused on this year.”

Knatcal also can draw motivation by looking ahead at the prospect of a college football career. Thus far, he has received offers from Mid-America Nazarene and Culver-Stockon.

“I want to play college football,” he said. “I want to get more (offers). If I don't have the motivation to get better, I could lose all of that. I don't want to lose everything I've gained.”

In between 7-on-7 sessions, summer camp practices, conditioning and his part-time job at McAlister’s Deli, Knatcal has camp visits lined up at Pitt State, Benedictine and Missouri Southern

“There are a lot of camps and not enough time in the summer, that's how it is I feel like,” he said.

Knatcal and the Eagles took part in two 7-on-7 tournaments last month, finishing second in Springfield and first in Joplin. Overall, Nixa lost just one game.

The 7-on-7 success isn’t exactly the sort of play Knatcal wants to chirp about.

“7-on-7 is a good and a bad thing,” Knatcal said. “It's good to get reps in against a defense you don't see everyday in practice. It's something new. It's also good to throw routes and get your timing down with receivers.

“But at the same there's no D-Line or O-line,” he added. “There is no pressure, so it can create some bad habits. I can hold the ball a little longer than I should normally or I could get not as deep on my drops, stuff like that.”

That said, Knatcal was unabashedly enthused with what he saw from his passing targets. In what has become a quick tradition under Perry, the Eagles’ receiving corps has again received a boost with the addition of athletes from other sports deciding to give football a try.

Noah Engelman, a defensive stalwart on the hardwood, and Wyatt Vincent, a five-tool prospect on the ball diamond, are testing out their talents on the gridiron.

“Our passing game is probably going to be a lot better. We've added more weapons,” Knatcal said. “Losing Jordan (Turner) is tough. But we’ve added Noah and Wyatt. They've been doing good. Noah is a freak athlete. Playing 7-on-7 at Joplin, he made an insane one-handed catch in the back of the end zone. It's going to be scary for some teams to cover him and Kael (Combs).”

As for his passing, Knatcal has been busy honing in on his mechanics.

“I’ve been working a lot on the velocity of my throws and my footwork,” he said. “I’m trying to get the ball out faster with my throwing motion. I definitely think I've gotten better at that. Overall, I think that's going to lead to me being more accurate. Last year, I was a little inconsistent with my accuracy sometimes. I'm trying to fix that and so far I think I've got a good start on that.”

Knatcal values having experience under his belt He started 10 of 11 games last season and led Nixa to the program’s first victory against eventual Class 5 state champion Webb City.

“First time around, it was a fun experience trying to attack the best I could,” Knatcal said. “Now I know how to attack under pressure and how to handle it. That will help me when we have the big games.

“It feels like the game has slowed down,” he added. “You can see everything better. Seeing something again, you’re able to say, 'Okay, I've been in this situation before, I know what to do.’”