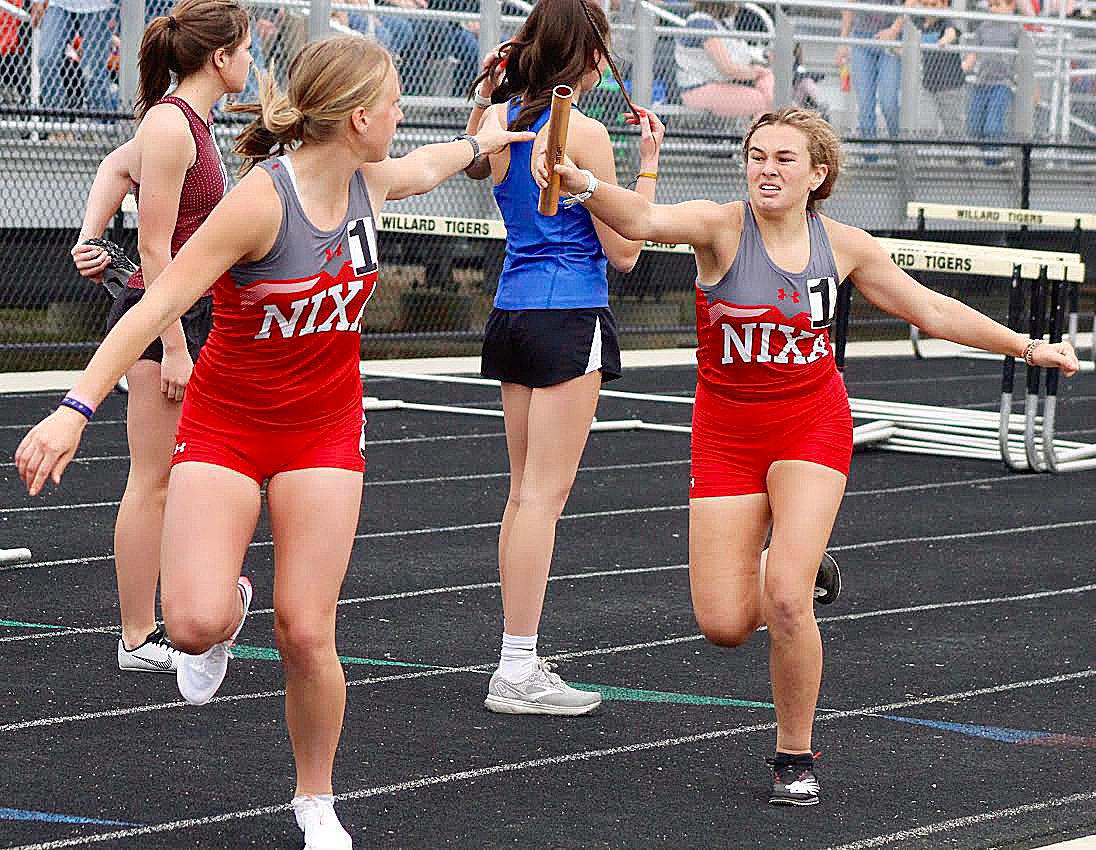 WILLARD — Alicen Ashley and the rest of Nixa’s 4 x 800 relay are missing injured teammate Macy Kopp, but are still winning.

The foursome of Ashley, Cassidy Williams, Rylee Sexton and Emily Harris whipped the rest of the field at the Jason Pyrah Invite on Thursday. The Lady Eagles posted a 10:16, :38 seconds faster than second-place Clever.

It was somewhat of a makeshift lineup. Ashley and Williams returned in the relay from last season, as did Brooklyn Bidinger and Macy Kopp. Bidinger sat out the relay Thursday and Kopp is out after suffering a broken ankle.

Ashley, Williams, Bidinger and Kopp were 11th at State last year in a time of 10:05.

“It was a big setback mentally for us when Macy went out,” Ashley said. “We were going to come back this year and try to get second or third at State, with three of our girls running (legs in the) low-2:20s. It was frustrating when that changed. We expected to plummet. But the season has exceeded our expectations. We have discovered our team is more deep than we thought. We’re performing way better than we thought we would without Macy. We have persevered.”

“We’re not at the level we were at last year,” Harris said. “But we’re still State competitors. Our goal is still to make it to State and maybe medal. We hope to take this team as far as we can go.”

As for a timetable for Kopp’s return, a best-case scenario may have her back in time for the post-season.

“I do think she will be back and we will get back to what we were running,” Ashley said.

At Willard, Ashley turned in a 2:28 opening leg and Harris finished with a 2:30 anchor leg.

“We know the teams in the area who are and knew they weren’t racing today,” Harris said. “It’s fun to be the team out in front. There’s no one to push you, it’s hard to push yourself and get a good time.”

Nixa’s Camila Figueroa won the 300 hurdles in dramatic fashion. Figueroa was clocked in 48.53 and second-place Chloe Parker, of Riverton, posted a 48.55.

The Lady Eagles’ Ashlyn Allison unleashed a throw of 107-4 to win the discus.

The Lady Jays’ 4 x 400 relay of Riley Britton, Kiersten Maddon, Kylee Lansdown and Flood beat the rest of the field by nearly four seconds while finishing first in 4:20.

The Eagles’ Tony Perez finished second in the discus with a throw of 162-6.