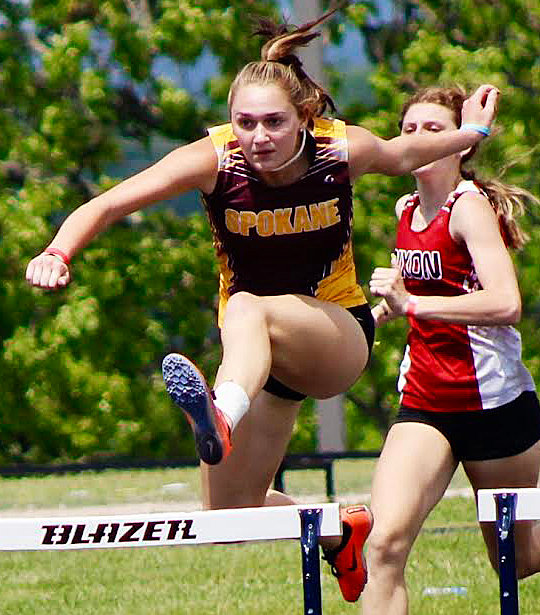 With help from her Spokane teammates, Maggie Czachowski bounced back from a disappointing finish in the 100 hurdles at Districts to finish first in the 300 hurdles in Class 2 Sectional 3 action on Saturday.

Czachowski posted a winning time of 48.79 to earn her way to this weekend’s Class 2 State Track Meet.

Czachowski hoped to make it to State in both hurdles events, but finished fifth at Districts in the 100 hurdles. While leading the race, she clipped the ninth hurdle and fell to the track.

“I was bummed and got a little emotional about it,” Czachowski said. “My teammates helped me out. They said, 'You're undefeated (in the 300 hurdles), you've got this.' This has been my event since my freshman year. I can't let the 100 (hurdles), which has never really been a big event for me, get in the way of my main event.”

Czachowski has been hindered in recent weeks by lingering effects from two stress fractures she suffered her freshman year.

“It's kind of come back because I never really let them heal properly,” she said. “Usually, this hits me at the end of track season when my body is like, 'Oh, we're at the end of things.' I’m not letting it affect me.”

Czachowski’s personal record is 47.17. Mirabella Redman, of Maysvillehas been the top 300 hurdler in Class 2 all season and posted a 45.52 in Class 2 Sectional 4.

“I'm excited to run against her,” Czachowski said. “That will be the best competition I've had all year. I'll be training my best to stay up there with her.”