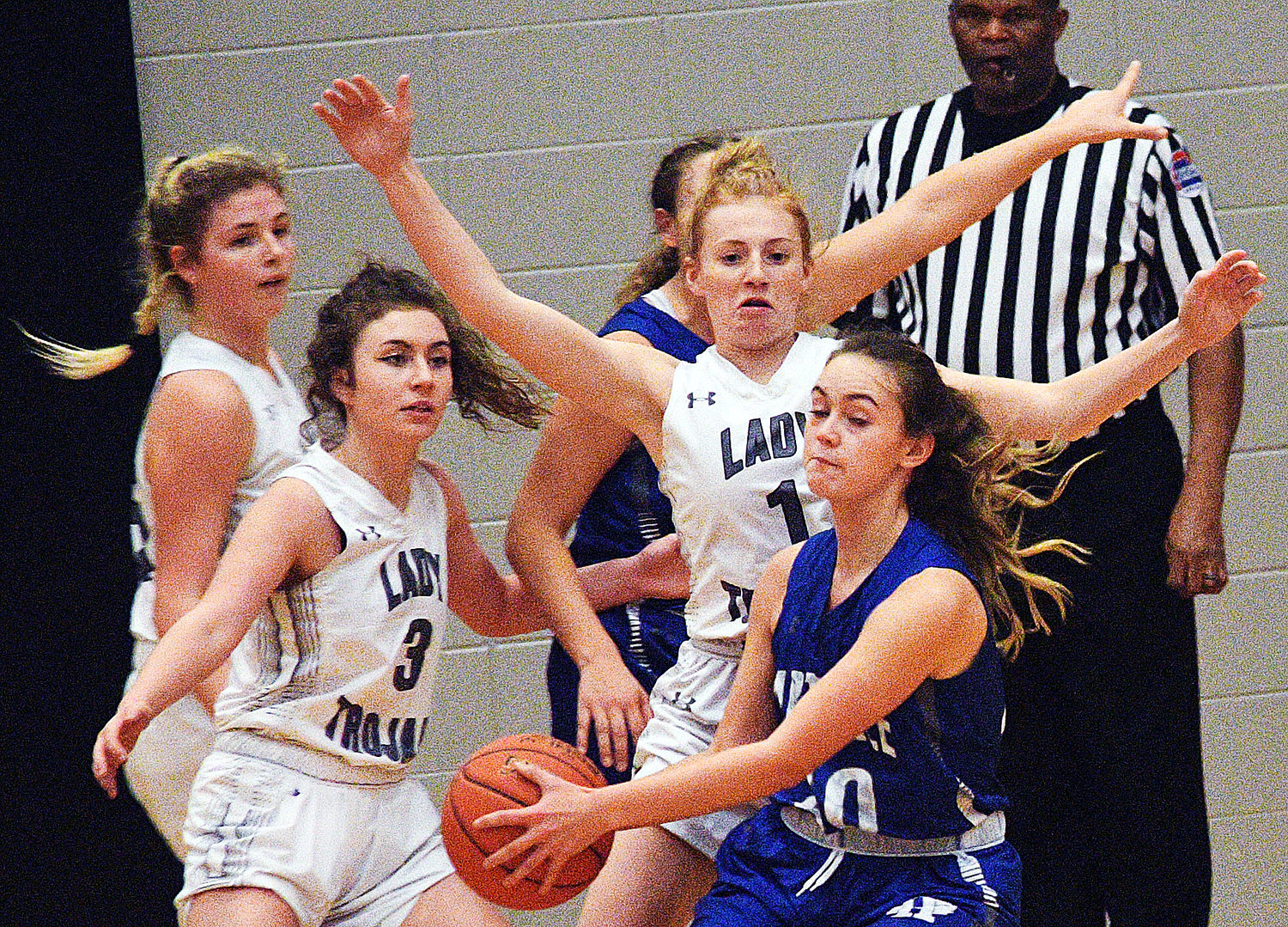 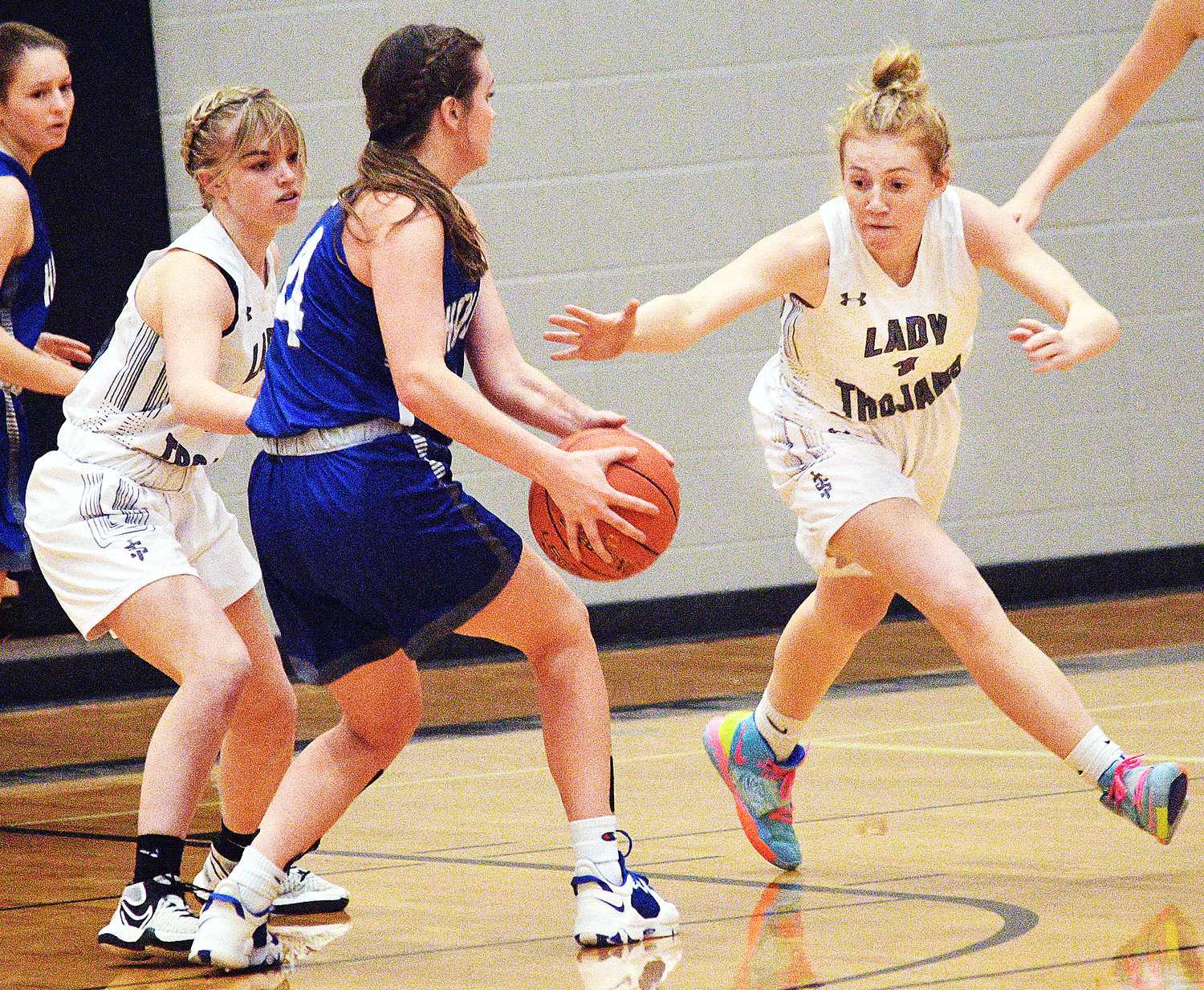 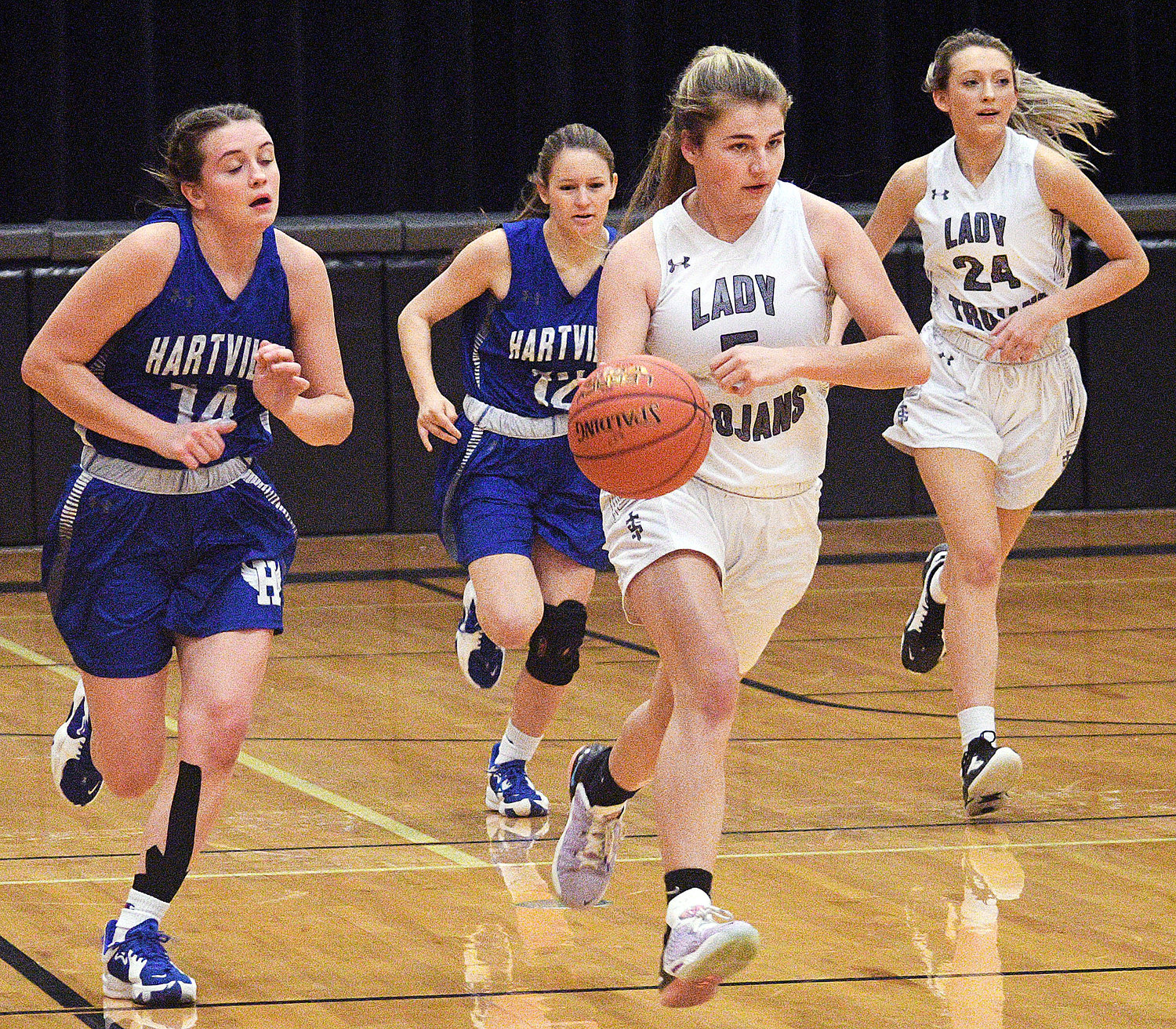 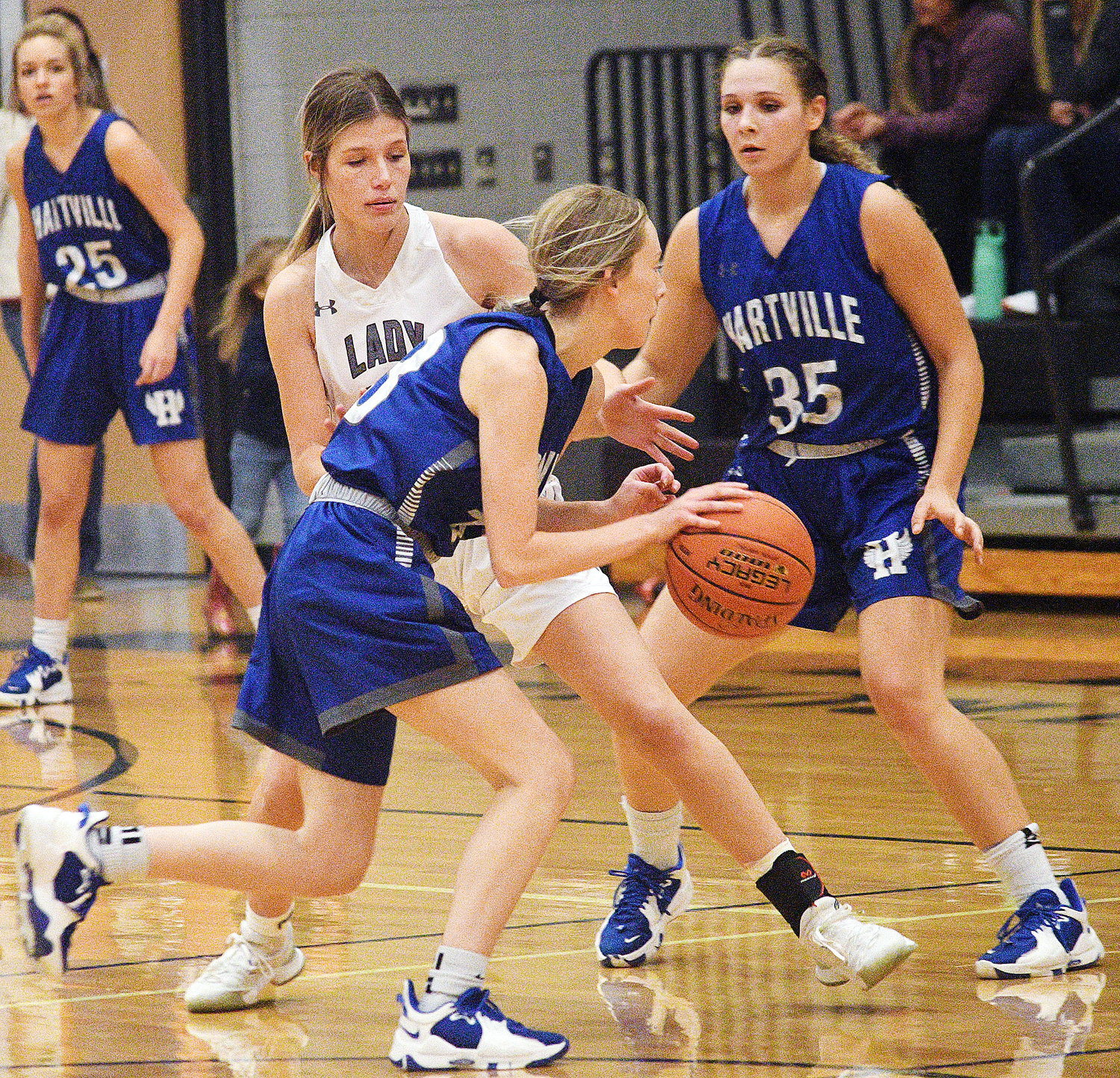 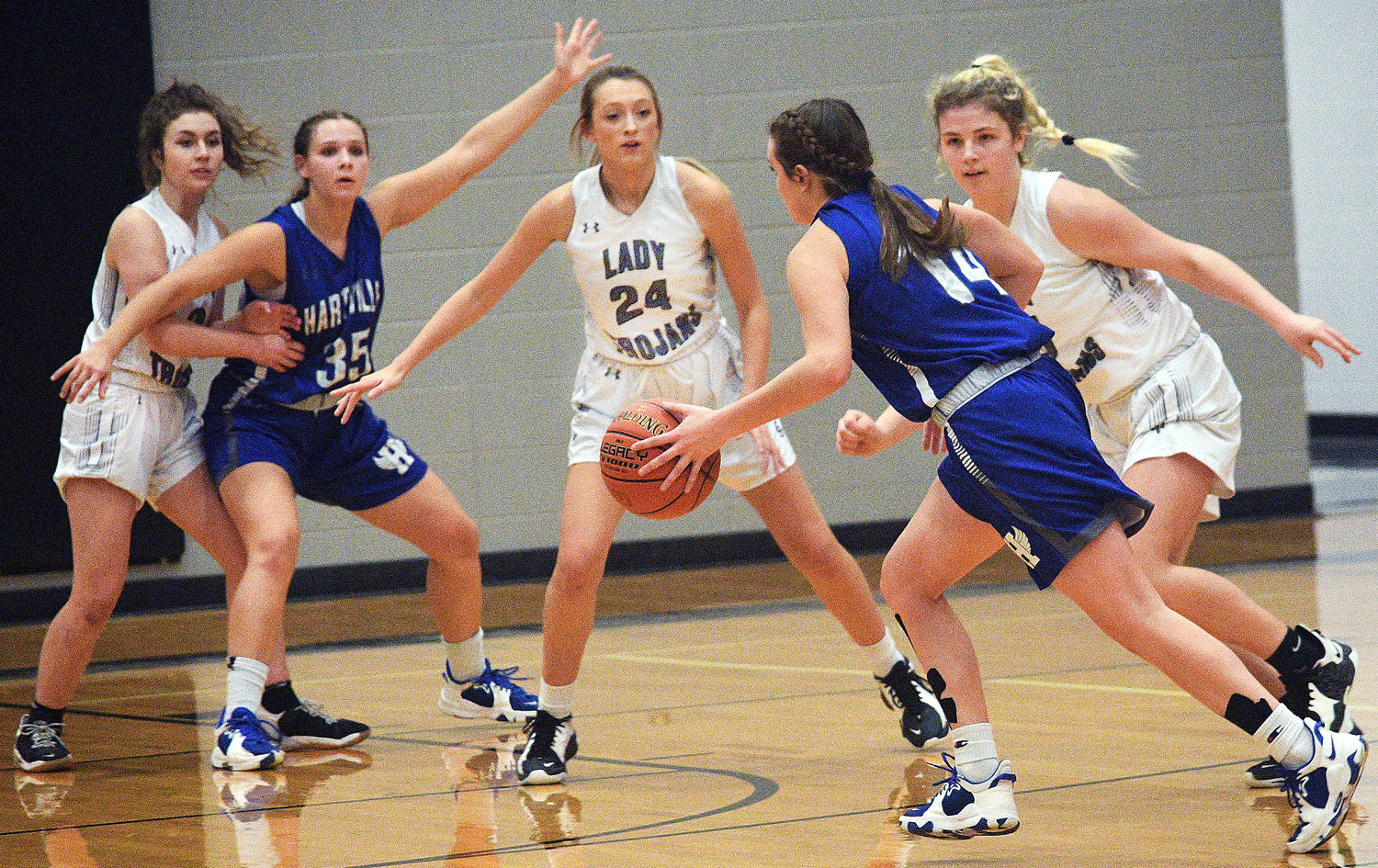 Sparta is winning at about the same pace it did the past two seasons, but the Lady Trojans are smiling and laughing much more than before.

Sparta’s winning team chemistry was on display throughout the Lady Trojans’ 61-35 semifinal rout of Hartville at the Sparta Tournament on Friday.

Coach Josh Loveland had 14 players check into the game, seven players scored and the bench produced 17 points. All along, starters and subs cheered each other on until the final seconds.

“We’ve played together for a long time, but we’re actually having fun this year,” senior guard Shelby McMurry said. “I think this is the first year we’ve had fun playing basketball.”

McMurry, who sat out last season, sensed Sparta’s camaraderie was better than she’d seen as soon as she made her return to the Lady Trojans.

“In the summer, automatically we had a different atmosphere between everyone,” McMurry said. “It’s 10 times more fun now, 100 times more fun. It’s hard to put into words how much fun we’re having while we’re enjoying playing basketball. Coach has talked about how much fun it is for him to sit on the bench and watch us play.”

Sparta (10-3) has won five of its last six games and Loveland is enjoying what he’s seeing on the scoreboard and among his players.

“Our team chemistry is really good,” Loveland said. “All the girls are having fun and are happy for each other. They’re glad to get to play together, help each other out and be part of something that is bigger than ourselves. In today’s society, there’s a lot about me, me, me. The girls are buying into the fact that, ‘Together we can be pretty good.’

“The things I’m most proud of about this team are how hard they work and how much they enjoy playing with each other,” he added.

Sparta, which was 10-3 at this juncture two years ago and 11-1 at this point last season, has transformed from a high-scoring offensive bunch into a tenacious defensive unit.

Hartville (11-3) had only 17 points through the first three quarters Friday. The Lady Trojans have held three of their last four opponents in the 30s.

“A direct correlation to the season we are having is how hard the girls are working on defense,” Loveland said. “Our defense was really good tonight. We rotated well, got our hands on a lot of passes and created some easy baskets for ourselves.

“We do great job of jumping to the ball, being there to help, putting pressure on teams and being able to trap, rotate and scramble to the open man,” he added. “I can run eight or nine kids out there who will play their butts off on defense. You do that and you can have success.”

“I think our defense is the best it’s ever been,” McMurry said. “We know if we work hard on defense, offense is easier for us. If we wear (the opponent) out while they’re on offense, it’s going to be easier for us when we’re on offense.”

McMurry led the offense against Hartville by scoring 16 of her 18 points in the first half. Megan Brown added a dozen. Sparta made eight 3-pointers.

The tourney’s title tilt is a familiar matchup, with the Lady Trojans and Blue Eye meeting each other in the final for the third straight season. Blue Eye is the four-time defending champion.

“They have had our number (in the tourney),” Loveland said. “My kids would like to get them. Blue Eye always keeps coming. They play so hard all the time.”

“They’re a good defensive team, so we’re going to have a lot of pressure on the ball when we’re on offense,” McMurry said. “I think we have the potential to beat them.”

In Friday’s first semifinal, Blue Eye won a 3-point contest against Chadwick on its way to a 62-40 victory.

The teams combined for 14 3-pointers, with Blue Eye making eight.