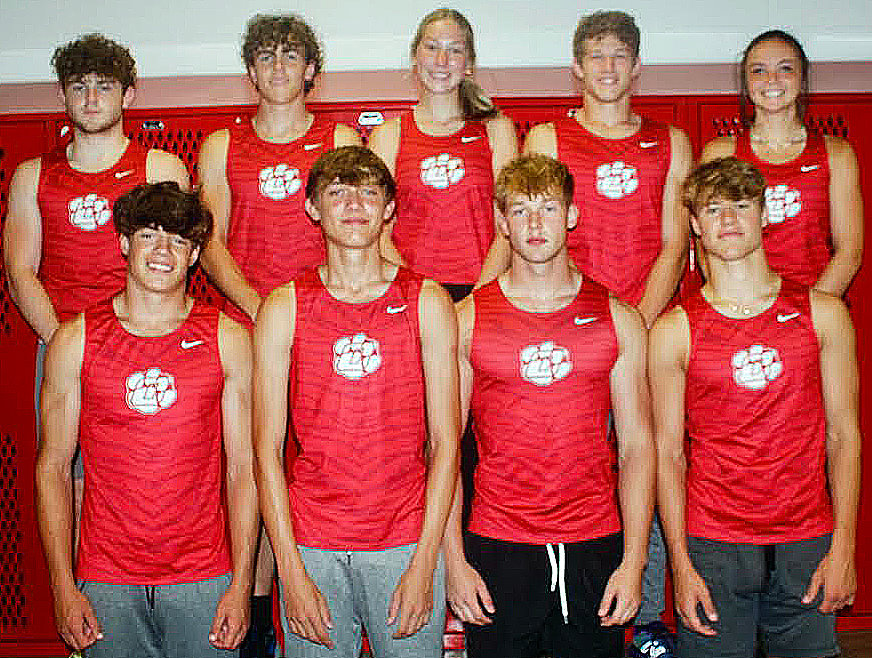 On her way to qualifying for the Class 5 State Track Meet for the first time, Ozark’s Hanna Vorhies has added to her legacy as a Lady Tiger.

Vorhies established herself at the net as a prolific hitter for Ozark’s volleyball team the past three years, but didn’t break through as a standout for the Lady Tigers in track until this spring.

Vorhies has blossomed, breaking the school record in the long jump three times and posting a leap of 17-113/4 at Sectionals. She is eyeing a medal finish at State this weekend in Jefferson City to cap her career.

“I’m kind of newer to the sport than other girls, so I’m at a point in which I’ve been able to PR more,” Vorhies said. “The last few meets, I’ve PR’d each meet. I hope I can do that again.

“This is my second sport and it’s been exciting to see how much better I’ve gotten,” she added. “I went into this year not sure how I was going to do. I’ve improved about two meters.”

Along the way, Vorhies overtook Mizzou signee Cali Essick, of Branson. While Vorhies took third at Sectionals, Essick was fourth with a 17-91/2.

“I’ve thought about jumping in college,” said Vorhies, who will play volleyball at Drury. “I’m still trying to figure all of that out.

“Originally, I decided to do track in seventh grade to keep in shape and help my jumping for volleyball,” she added. “All the workouts I do are for jumping, which translates well to volleyball.”

With State marking the final time Vorhies will wear an Ozark uniform, she is happy she’s been a Lady Tiger.

“I’m grateful and thankful I went to this school. Ozark has such a good culture,” Vorhies said. “Our volleyball team didn’t go to State, but I’m grateful for all the people I’ve met and friends I’ve made. I’m going to miss them. I’m also excited I’m going to college and come back and watch them on their ‘Senior Night’ and things like that.

“When the state meet is over, I’m going to be like, ‘Wow, I’ve graduated, high school is over and it’s time to go on to the next part of my life,’” she added. “It’s exciting but also sad.”

Tigers senior Ryan Dotson was optimistic entering State that he was due for a good day in the javelin.

Dotson wasn’t thrilled with his throw of 170-10 that earned him third place at Sectionals.

“I was off to a rough start on my first three throws (at Sectionals),” Dotson said. “Then, I went bak to my cross-over steps because I know I can get a good plant leg off of those. I squeezed out (170-10), just good enough to get third. But it was not a good day.

“Hopefully, I can have a better day at State and can get close to my PR,” he added. “I already got my bad day out the way.”

Dotson was fourth at State as a junior a year ago. He’ll continue to throw the javelin at Pitt State (Kansas).

“It takes some of the nerves away, knowing this isn’t my last year competing,” he said “I’m excited to go (to Pitt State) and get better. The coach there is telling me how much his athletes have improved from their freshman year to senior year. I’m looking forward to that.”

Abby Beets entered State having finished first in the pole vault in the majority of Ozark’s meets this season. She was first at Sectionals by clearing 10-6.

“The only meets I haven’t won were (Parkview’s) Girls Nite Out and any meet with Rolla, because they always win (the pole vault),” Beets said.

Beets’ mindset going into State was a vault matching her PR of 11-0 would likely assure her a medal.

Beets was happy to learn the weather forecast for Jefferson City called for sunny skies, pleasant temperatures and no rain.

“I was dead last (at State) last year,” she said. “It was pouring down rain, so everything kind of got messed up. They had it delayed and then realized they couldn’t delay it much longer or else we would have been there all night. But you have to work with the weather.”

Beets said the lack of a fellow competitor clearing the same heights as her at many meets this season forced her to be self-motivated.

“I can’t chase after someone, but I have to do my best regardless,” she said.

Beets was preparing to bring out a 13/150 pole for the first time.

Gabe Bauer has enjoyed competing against Kickapoo’s Tyler Harris the past three years. At Sectionals, Harris was first in the 3,200 with a 9:22 and Bauer was second with a PR of 9:24.

“We’re back and forth,” Bauer said leading up to State. “I love racing with him. We run good together and always PR.”

Over the years, they’ve become friends.

“We don’t hang out or anything, but we text every month or so and we talk at a lot of meets,” Bauer said. “He’s fun to be around.”

“His last 100 (meters) is always incredible and I’m sitting there hanging on coming back from nowhere,” Bauer said. “Sometimes I can beat him, if I can get far enough ahead. Him running in front of me, there’s someone there for me to chase. It has improved my kick.”

Bauer figured it would take another PR for him to place high at State.

“I’m proud of what I’ve done, but always think I could have done better,” he said. “It’s been fun.”

Looking ahead, Bauer will run at Drury.

“I’m very excited for Drury,” he said. “I’m going to have guys way faster than me to run with, instead of running by myself for most of practice. It’s going to be great too run with them every day. From senior year of high school to freshman year in college, I’ve noticed people get way faster. Hopefully, that happens to me.”