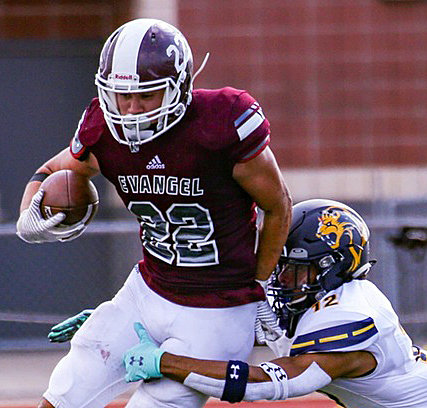 As many as nine Nixa grads are due make a return to Eagles Stadium later this summer and in the fall.

Nine former Eagles are expected to strap on shoulder pads at Evangel once the Crusaders begin practices next month. That makes for a nice coincidence that likely will help Evangel at the gate, with the Crusaders playing their home games at Nixa for a second straight year.

Oropeza, a 2017 Nixa grad and a senior running back, rushed 62 times for 236 yards and four touchdowns last year. For his college career, he has 155 carries for 572 yards and 10 touchdowns. He has 18 career receptions for 75 yards and one touchdown.

Oropeza signed with Southwest Baptist while in high school and played one season for the Bearcats, before transferring to Evangel.

Garcia, a 2018 Nixa grad, is entering his junior season as a defensive lineman for the Crusaders. Last year, he was in on 25 tackles, including nine solo stops. He collected 2.5 quarterback sacks.

Garcia had five tackles for a loss and forced one fumble over the first two weeks of last season.

Haymes is a 5-foot-11, 253-pound offensive lineman for the Crusaders.

Uber, 2021 Nixa grad, made his debut at Evangel last season by posing six tackles as a defensive back.

Adding to the Eagles’ contingent at Evangel are 2021 Nixa grads Riley Childs and Kolyn Eli.

Ozark is represented at Evangel by 2021 grad Jake Wofford.

The Crusaders will be at Nixa for home contests Aug. 25 versus Clarke, Sept. 10 against Culver-Stockton, Sept. 24 opposite Grand View, Oct. 15 versus Missouri Valley and Oct. 29 against Mid-America Nazarene.