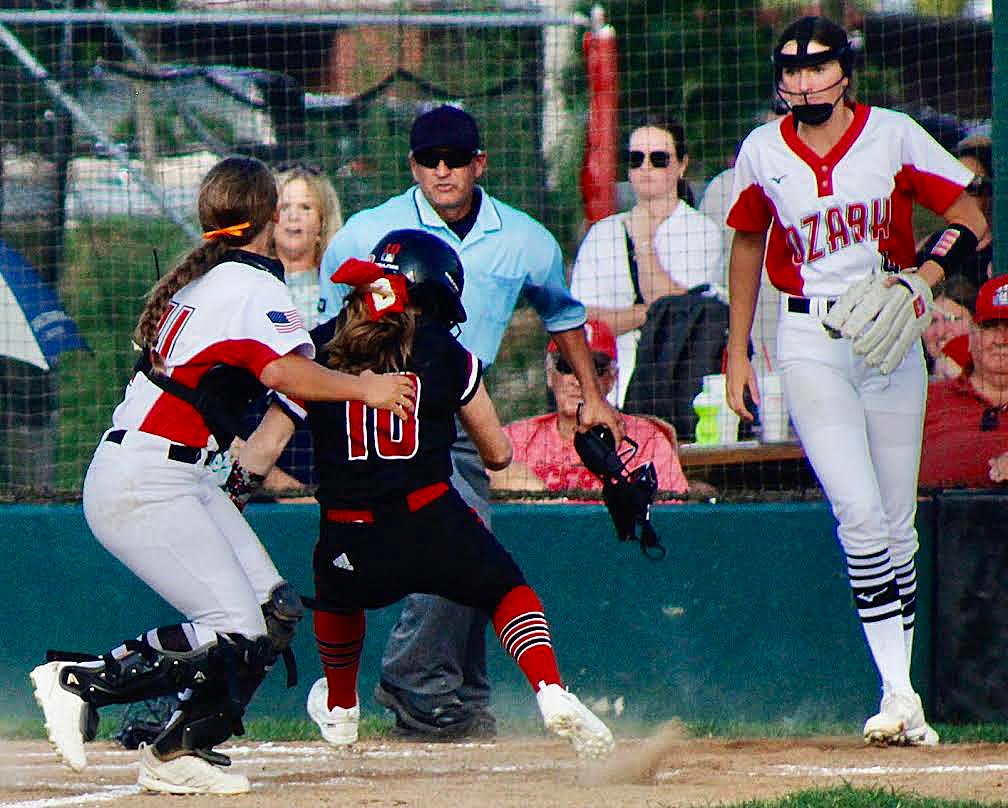 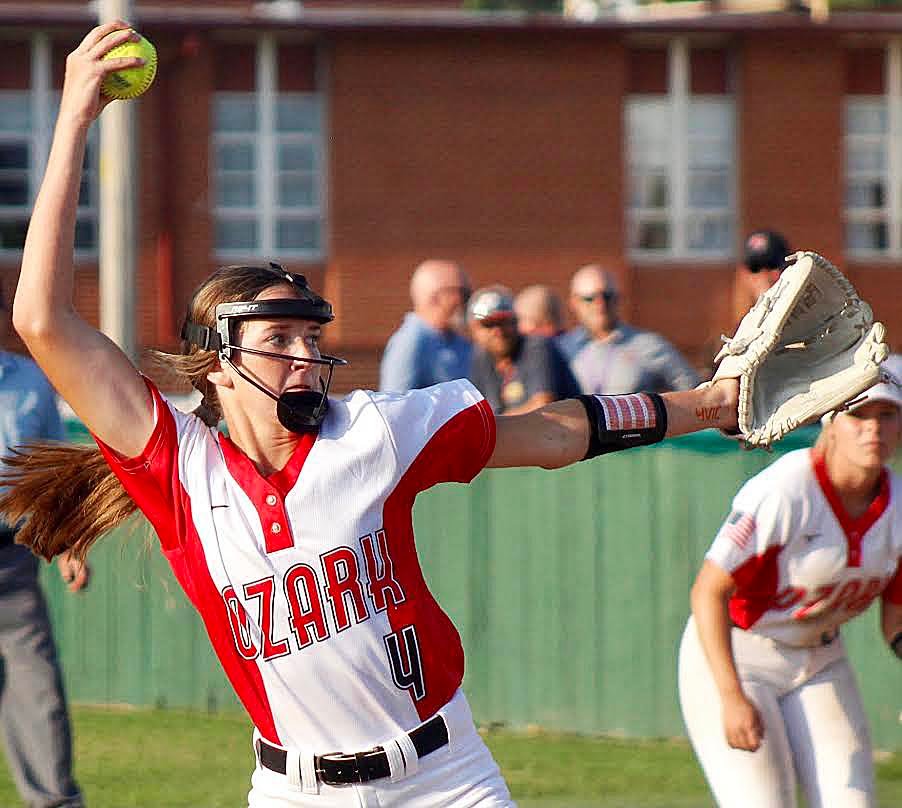 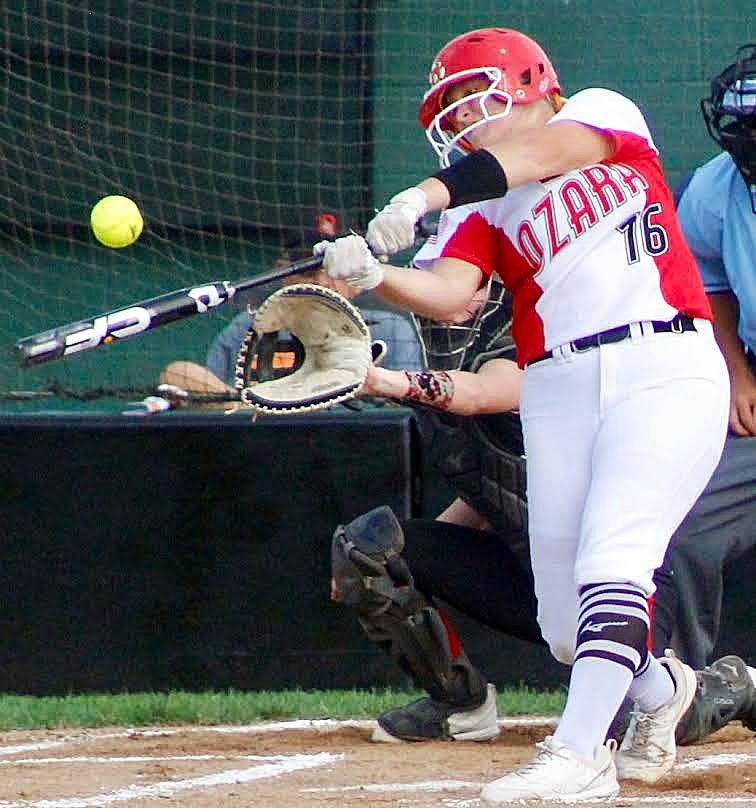 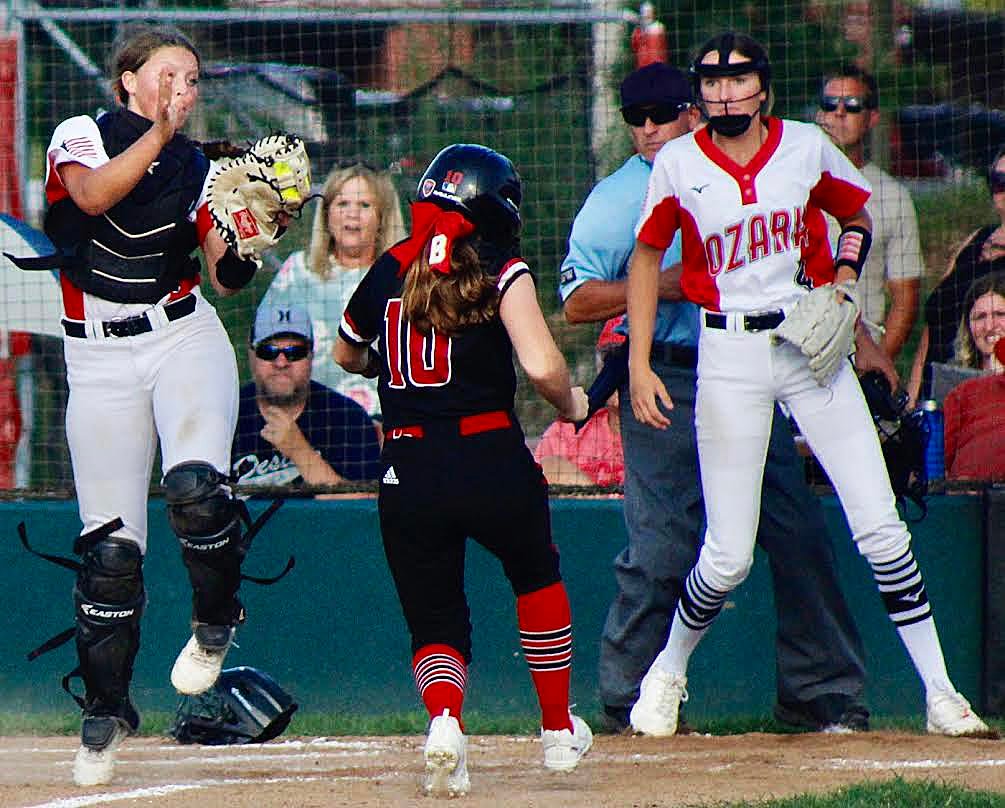 Jordyn Foley still owns bragging rights against several of her friends from Branson and Ozark continued its winning ways against the Lady Pirates by picking up a 3-1 victory Tuesday.

Going back 25 years, Ozark has never lost to Branson and Foley has been victorious in each of her two career center-circle starts against the Lady Pirates.

En route to her complete-game effort Tuesday, Foley faced one of her best friends in Branson catcher Kylynn Hall and has played club ball with several of the Lady Pirates who she also counts as friends.

"You kind of just have to get past that and focus on the game," Foley said, "It's a friendly competition. I'll talk to (Hall) and joke around about the game."

Sure enough, Foley and Hall went on to enjoy a meal afterward together at Ozark's newly-renovated Sonic Drive-In.

Foley and Hall had some interesting post-game chatter to discuss. Ozark prevailed, despite being outhit 10-5, with a throw-out at the plate proving critical.

With the Lady Tigers leading 3-1 in the sixth, Branson's Ally Dicken, Sierra Dailey and Jerzi Yacko all singled. But the Lady Pirates still weren't able to score.

"Audrey made a great play and that was a great catch by Natalie," Ozark coach Jimmy Nimmo said. "That was a big out. Branson had strung three hits together and had momentum."

Foley closed things out with a scoreless seventh.

Nimmo credited the Lady Pirates for putting the ball in play, particularly with two strikes.

"Branson has always been a good hitting team. You can expect them to put the ball in play. They did their job," Nimmo said. "Most of the balls they hit were with two strikes. We have to find a shut-down pitch for Jordyn and get that developed in the next week or two and shut those hitters down."

Foley's out-pitch could be her rise ball. She has shown great improvement with it, but still refers to it as a work in progress.

"I worked on my rise ball a lot during the summer and am trying to get it consistent," she said. "It took a while to learn. It's getting better and can always get better."

Foley is fresh from a productive club ball season that caught the attention of college coaches. Among them was Missouri State coach Holly Hesse, who watched Foley pitch in a scrimmage over the summer.

"I'm trying not to change anything," Foley said of pitching with a college coach in attendance. "It's exciting to see what I will choose to do."

"Whoever gets her in college is going to have a big pitcher. She's going to do well," Nimmo said. "Confidence and consistency is what she has to show. On a good day, Jordyn is better than anyone else in southwest Missouri."

Nimmo is hoping Tuesday's win serves as a break-through for shortstop Kelsie Batey.  She has replaced Kayley Linebur, who started at shortstop for Ozark last year but will miss all of this season due to a torn ACL she suffered while playing soccer.

Batey helped the Lady Tigers finish off Branson in the seventh by throwing out a batter on a close play at first base.

"To not have Linebur in our lineup is tough," Nimmo said. "Her fielding percentage was over .950 and she only had eight errors last year. For a shortstop, that's pretty phenomenal. You put Linnebur back out there and we are an entirely different team on the infield.

"Everything is starting to come together like I hoped," he added. "I knew Kelsie would be fine. She is a natural shortstop. She can throw from different arm slots. But her tendency is to take her time too much. On that play in the seventh inning, it was an absolute bang-bang play. She knew she had no time to delay and had to zip that thing across. That's probably been her best play, just because of the exchange and how quickly she threw the ball across the diamond."

Ozark plated two unearned runs in the third inning and added an insurance tally in the fifth.

The Lady Tigers opened COC play by avoiding the upset, while defending league champion Nixa was knocked off by Neosho 2-1.

"We have a good chance at winning the conference, as long as we keep getting better, especially on the offensive side," Foley said.

The contest was Ozark's first game since the death of junior Victoria Jones over the weekend.