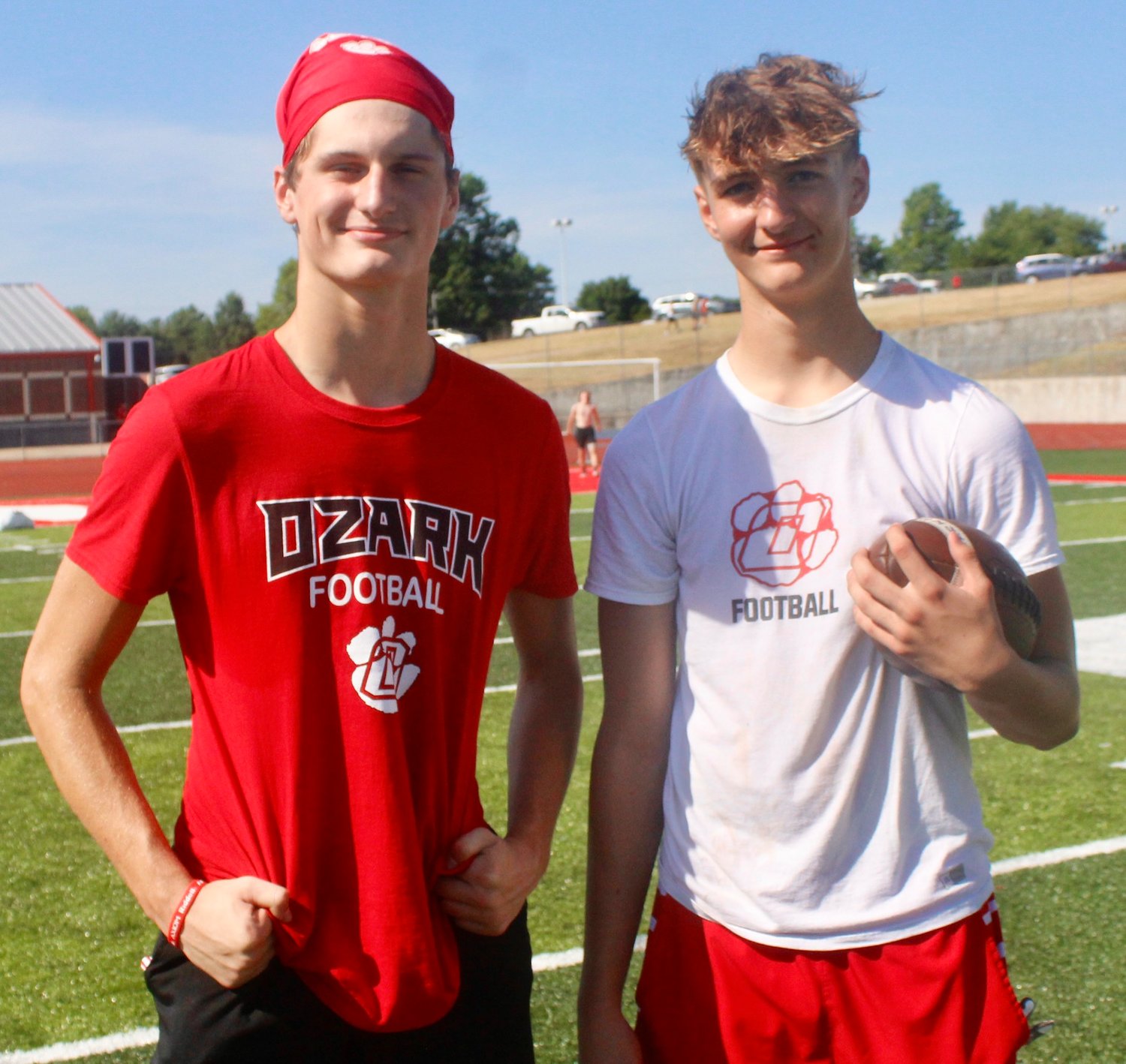 When Nick Rohrbaugh and Jace Whatley first met five years ago as sixth-graders, there was an instant kinship.

“He stood out and I stood out,” Rohrbaugh said. “I saw him and knew we would be friends. We kind of clicked together and we've grown a friendship.”

Rohrbaugh and Whatley stood out in junior high for the same reason they still stand out now as juniors. They’ve always measured up about a half a foot taller than most of their cohorts.

“We're always looking over everyone,” said Whatley,
who like Rohrbaugh stands 6-foot-5.

Looking ahead to Ozark’s upcoming season, the prospect of Whatley and Rohrbaugh looking over opposing defensive backs could make for an intriguing Tigers passing game.

“I love ‘Twin Towers,’” Whatley said of a proposed nickname for the duo.

Whatley and Rorhbaugh love their chances of hauling in a pass from quarterback Brady Dodd, no matter if they covered by a defender(s) or not.

“Even when we aren't open, we're still open,” Whatley said. “Most DBs are under 6-0. I don't think I went against one last year who was over 6-2. I can reach over them and grab the ball. I'm sure Nick can do the same. We both have good hands and can jump up catch the ball over people. It's a good matchup for Brady and our offense.”

“A lot of the cornerbacks aren't as tall as I thought they would be,” Rohrbaugh said. “It opens up a lot of opportunities throwing the ball to us because we're both 6-5.”

Whatley led Ozark in catches and receiving yards as a sophomore last year, when he brought down 21 receptions for 458 yards, an average of 21.8 yards a catch.

Dodd, a receiver early on last season, is actually tied with a few others as the Tigers’ second-leading receiver all with one catch a year ago.

Rohrbaugh is preparing to make his first varsity catch,mhaving honed his skills at the jayvee level.

“I'm not used to the Friday Night stuff,” Rohrbaugh said. "It's a new environment for me to play on the varsity. It's more fun and exciting. It motivates me even more. I'm trying to get better.”

Rohrbaugh and fellow receivers Kadin Powers and Cooper Buvid and running back Ethan Sutherland all figure to fly under opponents’ radar early, as game plans zero in on Whatley.

“It will leave me open,” Rohrbaugh said. “I’ve got to make it happen.”

“It might start out where they might key in on me. That's good for him,” Whatley said. “It will make him even more open. Once they find out he's going to be a big threat, (coverages) will even out, which will be good for me.”

As for working with Dodd, Whatley and Rohrbaugh voice plenty of confidence in their quarterback. When Ozark went to its passing game after establishing its running game last year, big plays often followed. Dodd averaged 19.0 yards for each completion last season on his way to making good on 47-of-82 passes for 895 yards.

“Brady is throwing amazing,” Rohrbaugh said. “He’s so accurate with his passes. I never have to worry about mwild passes from him. He always throws it right here.”

“He throws 100 mph, that’s the baseball player in him,”m Whatley said. “But it's right where we want it. He throws a dime every pass.”