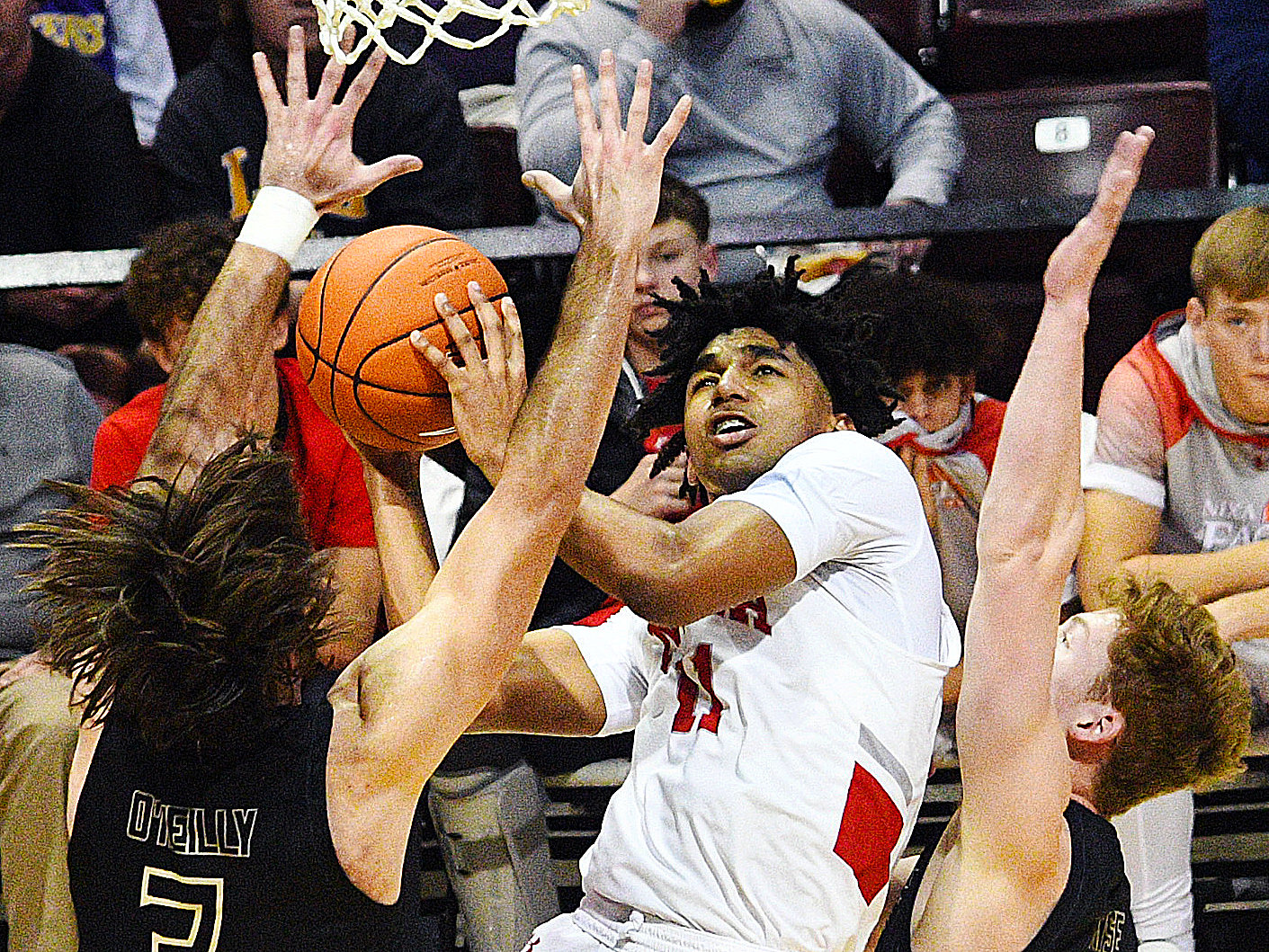 SPRINGFIELD — Jordyn Turner gave a much better account of himself in Nixa’s rematch with Catholic on Friday than he did in the teams’ first meeting.

Turner’s 16-point performance in the Eagles’ 56-53 triumph over the Irish is the kind of effort he has turned in at home. But on the road and in particular in Springfield, he hadn’t been nearly as productive.

Turner was scoreless against Catholic at the Blue & Gold Tournament a few weeks ago. He was also scoreless at Parkview in early December.

“Not scoring the first game (against Catholic) frustrated me a lot,” Turner said. “I was a little nervous, definitely timid. I should have took way more shots. That would have helped the team.

“When I saw we got the rematch with them, I wanted to come in and play aggressive on both the offensive and defensive sides,” he added.

Turner was 5-of-10 from the field while making a trio of 3-pointers.

At the other end of the court, Turner was part of Nixa’s defensive effort on Catholic hotshot Zach Howell. After scoring 33 points versus the Eagles at the Blue & Gold, Howell was held to 18. Most impressive, he was limited to 10 field-goal tries.

Turner, Jackson Bell and Kael Combs took turns defending Howell. Turner was a bit surprised to be matched up against him.

“It was definitely an opportunity to show the coaches I can guard,” Turner said. “When I first saw I was matched up on him, I was like, ‘Why not Kael?’ But I went out and guarded him well.”

The Eagles opted to have a defender face-guard Howell in the rematch.

“They definitely guarded me differently,” Howell said. “They had a box-and-one on me about half the game tonight. I was getting hounded all game. Last time, they manned up. It was a different look for us and we had to respond to it. We had to adjust.”

"If I’m a coach, I’m 100 percent going to face-guard Zach,” Catholic coach Jack Simpson said. “They were committed to him the whole night.”

Howell had just two points in the fourth quarter. With a chance to force overtime, he missed a 3-point attempt at the buzzer.
Howell finished 6-of-10 from the field and was 3-of-7 on his 3-point attempts.

“He does a good job with his body getting open, he uses screens well and they do a good job getting him open,” Eagles coach Jay Osborne said. “He’s a tough matchup. For the most part, we did a good job on him. Holding him to 18 is good. I thought if we held him under 25, we would win.”

Nixa’s ball-handling was also a factor, with the winners committing only five turnovers. Colin Ruffin did not have a turnover.

But the Eagles didn’t exactly close things out the way they would have liked. Nixa was only 8-of-15 at the foul line in the fourth quarter and finished 12-of-23 shooting free throws. The Eagles gave Catholic a shot to tie at the buzzer after Combs missed two free throws with :21 remaining.

“We’re struggling in some areas,” Osborne said. "For a coach, in mid-January to see your team struggle, I take that personal and my coaching staff takes that personal.”

In addition to Turner’s 16 points, forward Jaret Nelson added a dozen and Ruffin had 11. Combs was in foul trouble while scoring eight points.

The two Nixa-Catholic contests were the first games between the schools in at least 15 years.

“For some reason, they just battle us,” Osborne said of the Irish, who have also lost to Kickapoo and Republic. “They were in attack mode and had us on our heels most of the night. It was kind of a frustrating game. They’ve got a good team. Give them credit. There was no shame losing to them a few weeks ago and there was no shame struggling against them again today.”

The Eagles, still stinging from their loss to the Irish that cost them a chance to meet Kickapoo at the Blue & Gold, didn’t exactly feel like they gained redemption by evening the score with Catholic.

“I don’t know if it was necessarily redemption,” Nelson said. “Like coach says, you don’t really get over (a loss). Yeah, it feels good. But should we have lost the first time? I don’t think so.”

“Kind of, kind of not,” Turner said about redemption. “I don’t really think so, honestly. I think we could have beat them by more than three (points).”

Nixa will try to win two TOC games for the first time  when the Eagles face Parkview Saturday in a fifth-place game at 4.