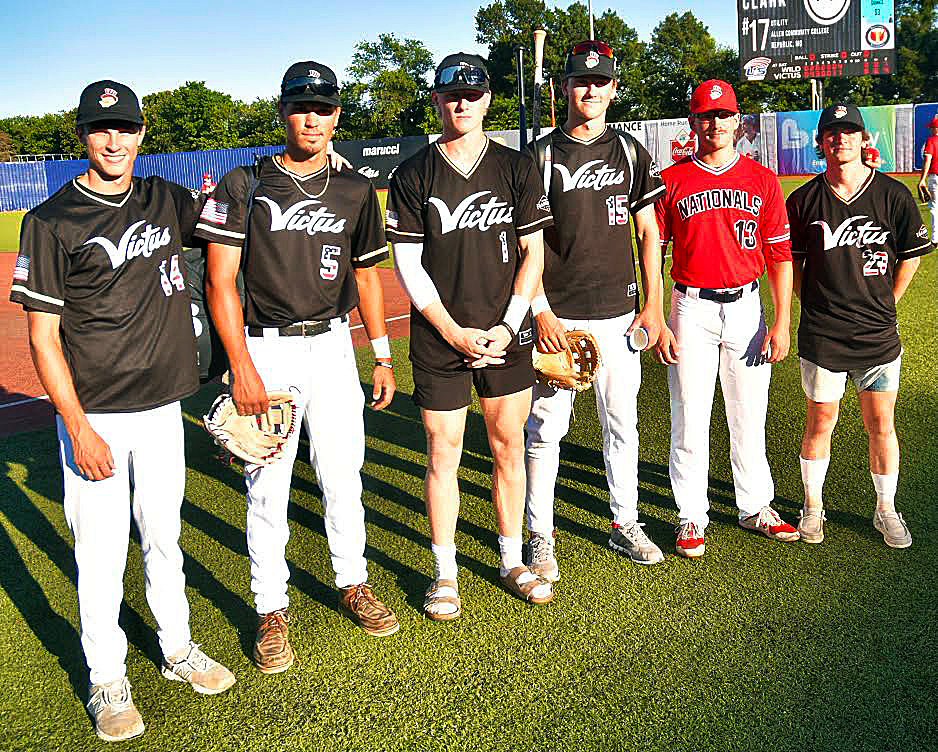 Ryan Retone and his Victus teammates received a rather rude introduction to the Show-Me Collegiate League courtesy of Midwest Nationals pitcher Brody Bunting.

Bunting, a Little Rock, Arkansas, native fresh from a year of juco ball at Johnson County (Kansas), dominated Victus in a 14-1 Nationals victory on Opening Night.

“I was thinking, ‘Oh, is this how the whole league is going to be?’” said Retone, a recent Nixa grad. “But it’s not. (Bunting) is just really special. He was throwing in the lower 90s and in the zone. We just happened to see him on Opening Night.”

Over the league’s first several weeks, the Victus have been at or near .500, while fielding by far the youngest team in the league.

“I feel we’ve adjusted well,” said Retone, a middle infielder who is going to State Fair. “We’ve played good baseball. We’ve hung in there well. I don’t think you would know we’re the youngest team in the league if you came out and just watched a few games.”

Like the Nixa and Ozark grads, most Victus players have not yet played college ball. Thus, the league is giving them a sneak peak of what is in store for them at the next level.

Baumann, who is headed to College of the Ozarks, feels the Show-Me League has confirmed in his mind that he can play at the college level.

“I'm glad I've got to do this,” said Baumann, who is pitching and playing first base for Victus. “I’m feeling good on the mound. It’s been good to get a confidence boost going into college by getting good at-bats and good pitching against college guys.”

“It's really important for anyone who wants to play at the next level to do this,” said Hanks, who is bound for Columbia. “I feel like a lot of people on our team are gaining confidence as we go throughout our season.”

“It’s been a big step up from high school,” said Miller, who is signed to go to Drury. “I feel we’ve adjusted well to it.”

Hitters have discovered facing college pitching is entirely different than going against most high school pitchers.

“They can hit their spots,” Hanks said of college pitchers. “Overall, they can throw different types of pitches better than kids could in high school.”

“You have to be a little more selective with the pitches you swing at,” Retone said. “If you see anything out over the middle of the plate, you’ve got to hit it. In high school, a pitch might be a strike two balls off the plate. Here, the zone is more accurate. You know you don’t have to chase anything away from the zone. The pitcher has to come to you. But it’s still tough. You’re not going to find a bad pitcher. Everyone knows how to get you out.”

Nelson, a Fort Scott (Kansas) signee, relates that hitters can’t sit on a fastball even on traditional hitter’s counts.

“The pitch sequence is different,” he said. “You can be up 2-0 and they will break a curve ball off. That doesn't happen as much in high school because those pitchers aren't as confident in those pitches.

“When you go up a level, it changes,” he added. “You have to learn the game in a different way. You have to re-adjust.”