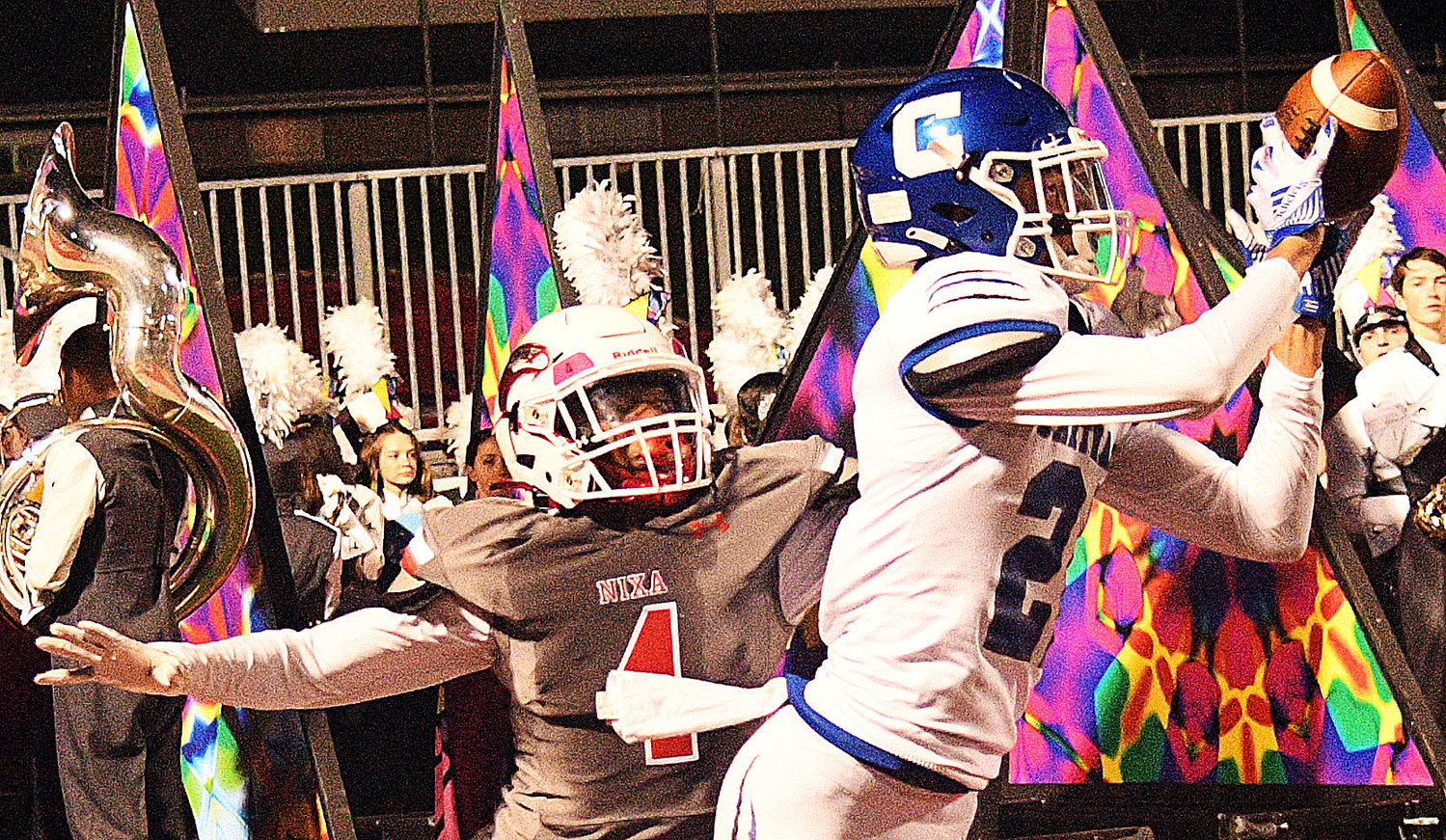 Asked figuratively to take off his football helmet and put on his broadcasting head-set, Nixa’s Ryan Retone was succinct while describing Carthage’s domination of the Eagles on Friday.

The teams’ COC showdown couldn’t have been any more anticlimactic. The Tigers totaled 371 yards on the ground while running over Nixa and handing the Eagles a 49-14 drubbing.

“They do what they do and you know what they are going to do and they just do it,” said Retone, who doubles as a running back on the gridiron and a color commentator for Nixa basketball and softball games on the school’s streaming network. “It’s like that every year. Even though we knew what they were going to do, they are really good at what they do.”

True to form, Carthage (9-0) showcased its centerpiece, running back Luke Gall, as he carried the ball 18 times for 170 yards and even threw a tight spiral on a halfback option play that was good for 37 yards. Gall had 141 yards rushing by halftime, with the Tigers up 35-14.

Carthage also unleashed quarterback Caden Kabance for 137 yards rushing and running back Cale Patrick for 93 yards on only six rushes.

“They’re tough and physical,” Nixa coach John Perry said. “Luke Gall is hard to tackle. He’s bigger, stronger and faster than everybody out there. Coach (Jon) Guidie does a fantastic job of putting players in conflicts. If you put enough hats in the box to try to tackle Gall, then they hand it off to a joker outside, where you don’t have enough hats. They’ve got so many weapons. They are hard to defend.”

Carthage’s offensive line won the battles in the trenches and in Nixa’s second line of defense. Defensive backs Cody Breeden and Jacob Miller were in on tackles throughout the night.

“When you have No. 14 (Gall) running at you like a freight train, all you can do is get low to try to tackle him,” Miller said. “Besides (teammate Ramone Green), I’ve never seen somebody run as hard as (Gall). They were all running pretty hard.”

The Tigers are the total package. Kabance was accurate with short throws and when he went downfield. He has a go-to receiver in Hudson Moore. The two hooked up for a five-yard touchdown pass with :09 remaining in the first half.

“We knew sometimes when the route was coming and we still couldn’t cover it,” Miller said.

Nixa spotted Carthage a 14-0 lead and never could keep pace with the Tigers. The Eagles were as close as 14-7 on a 36-yard touchdown pass from Connor Knatcal to Jordyn Turner and made it 28-14 on a 56-yard touchdown run by Austin McCracken.

Injuries had Nixa short-handed. Nixa was minus running back/cornerback Spencer Ward, linebacker Antonio Perez for the second straight game and Green sat out his seventh game.

Ward injured an ankle in the third quarter at Carl Junction last week, Perez hurt a knee versus Webb City two weeks ago and Green has been sidelined since Week Two with a broken collarbone.

“We’ll probably get one of those guys back next week and one of them we might or might not,” Perry said. “I would suspect we will get Spencer back. Ramone will probably not be back. He’s still dealing with his shoulder and hasn’t been cleared. I don’t know if we would throw him in there, if he did get cleared because his future and health is more important than any ball game.

Retone received the bulk of the carries in place of Ward.

“He’s a tough kid,” Retone said of Ward. “I think tonight it was more of ‘Let’s not ruin his football future, he’s got two great years ahead of him.’ It wasn’t worth the risk. It’s tough when you lose two of the best running backs in the state. I knew going into the week I was going to have to try to step up and help the team. We’ve had that ‘next man up’ mentality all year.”

Fullback Casen Hammitt was converted into a linebacker to take over for Perez.

“With Tony being out, the coaches asked me if I would like to try to help on defense and I gladly went,” Hammitt said. “My job tonight was to keep outside-contain and squeeze everything in.

“The last time I played defense was eighth grade,” he added. “But we’ve got great coaches and they’re helping me learn. I think I’m doing good because of the coaches. I’m going to do everything I can, leaning on my coaches to help me learn the position to the best of my ability.”

Perry anticipates his players bouncing back in a big way.

“Everyone needs to be humbled every once in a while,” he said. “Things have been great. We ate a little humble pie tonight. The sad thing is sometimes it takes a loss to make you go back to doing things the way they are supposed to be done.”