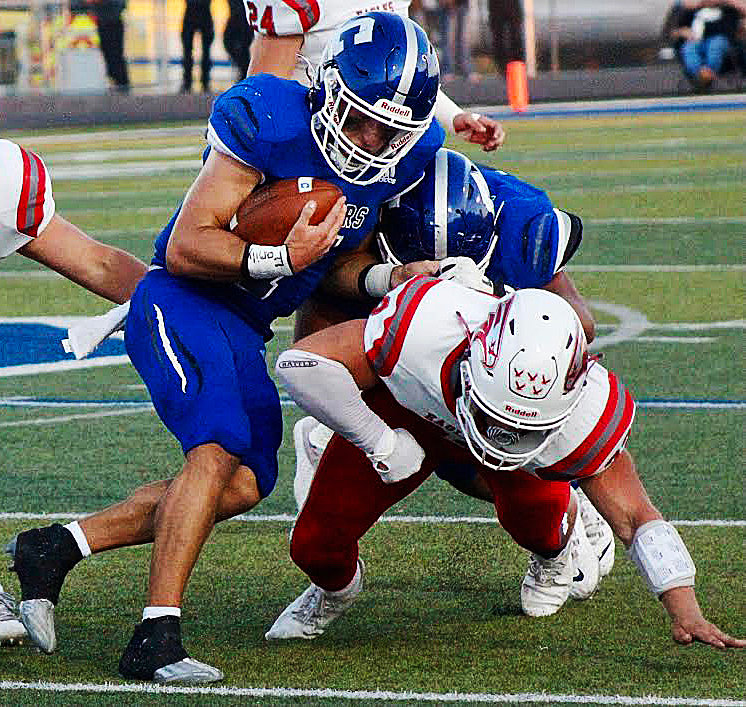 Gage Sporleder was among the Nixa fans and players who felt the Eagles' win against Carthage this past Friday compared favorably to the program's victory versus Webb City a year ago.

He can actually speak from the perspective of both a Nixa fan and a player.

"Personally, I think this is bigger than Webb City," Sporleder said following Nixa's 22-21 win at Carthage. "This is the biggest game I've ever had. It feels amazing to come here and beat them at their own crib."

The drama that unfolded late between the Eagles and Tigers supports Sporleder's assessment. Nixa won on a two-point conversion with 1:57 remaining.

Last year, Nixa broke away from Webb City in the second half en route to a 41-27 triumph.

It was the Eagles' first win ever versus the Cardinals. Nixa hadn't beaten Carthage since 2014.

It's not surprising Sporleder liked the win at Carthage best. He was in the middle of it as a senior insider linebacker. The win versus Webb City, he had to watch from the Eagles' student section as part of his season-long suspension.

"I still went to football games as a junior," Sporleder said. "That helped me stay in spirit. I didn't go to the games hoping they would lose. I wished the best for them. But it was tough. That year off was rough. It was hard on me. But I grew from it."

By all accounts, Sporleder has responded better to his suspension than anyone could have hoped, even himself.

"Coming back, this is everything I expected it to be and more," he said. "I've grown closer with Christ. I've grown so much as a person, a football player, a son, a brother, a friend and a student."

Sporleder credits coach John Perry for inspiring him during his comeback. That's been a common refrain in Perry's three years at Nixa. Seemingly countless football players and even athletes in other sports, upon encountering adversity have emerged to sing praises for Perry.

"Honest to God, he's got a great attitude," Perry said of Sporleder. "We're so happy to have Gage with us. Everybody deserves a second chance and he has made the most of it by being a fantastic team player. He's worked his butt off."

The culmination of Sporleder's comeback to this point, anyway, was his starring status at Carthage. Dude delivered hard hit after hard hit in one of the gutsiest efforts by an Eagles linebacker in recent seasons.

Sporleder was in on 17 tackles.

"He laid some licks out there tonight," Perry said.

"I wrestled since I was four, so I've always been super aggressive," Sporleder said.

Sporleder was as responsible as any of the Nixa defenders for the Eagles eventually getting the best of Carthage's offense. The Tigers managed just one second-half touchdown and finally were turned away on fourth down in the fourth quarter.

"We talk to our defense about body blows and to keep hitting (ball-carriers)," Perry said. "We were hitting them good and making them earn everything they got. Toward the third quarter, I thought some of that began to roll in our favor."

The crushing collisions between Sporleder and Carthage running back Luke Gall were classic confrontations. They met repeatedly. Call it a draw.

"We basically balanced out," Sporleder said. "A few times I hit him backward and a few times he hit me backward. He's a hard runner. I said to him, 'Good run.' He never said anything back. He's just kind of to himself.

"The whole game I was telling people, 'Good hit, good block' and all that," Sporleder added. "I never did that as a sophomore. I'm much more mature. Being able to handle my emotions now and put them into the game is what makes me."