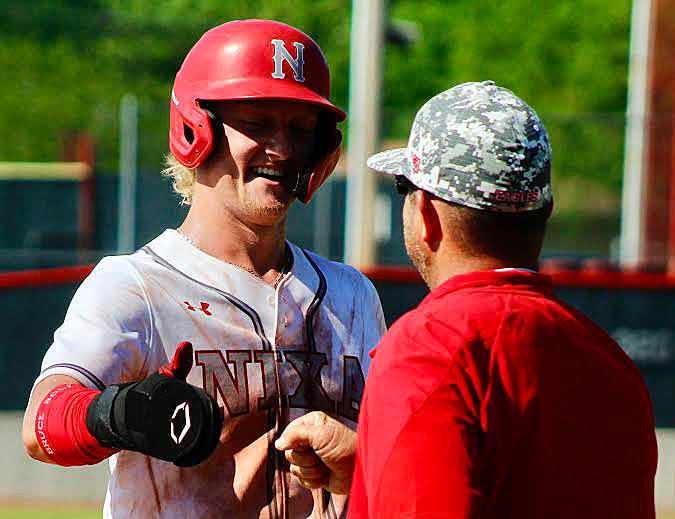 Jaret Nelson could get to the 100-hit milestone during Nixa’s Class 6 District 6 run in Joplin this week. He entered the Eagles’ opener with Springfield Central on Monday seven shy of triple digits.

Nelson banged out 48 hits during regular-season play this year, had 40 as a breakout junor last season and debuted with five as a freshman three years ago.

The senior catcher won’t allow himself to dwell on the milestone.

“My goal is to win,” Nelson said. “That stuff is awesome and it’ll be cool to have. But I think my Mom enjoys that stuff more than I do. There's a personal motive in baseball, but there's always an end-game aspect. Bottom line, I want to help my team win.”

With the 2020 spring sports season wiped out due to the COVID outbreak, few hitters anywhere have reached 100 hits the past two years. Nelson has had to average 1.49 hits a game the past two seasons to put himself in position to have a chance.

“That would be a heck of a milestone,” coach Logan Hughes said of his senior catcher. “That's a really good career. He's earned that because of all the work he's put in to this point.

“Jaret is fun to watch,” he added. “He can hit the ball all over the park. He can run, so he gets some infield singles that maybe some guys don't get.  He wants to get a hit every time he's up there, or at least get on base. There's nothing he hasn't seen in the batter's box, so he’s very confident in his abilities.”

Even going back to his freshman season, Nelson expected success.

“Freshman year was kind of a struggle,” Nelson said. “I had to go through a lot of things and internal battles and issues to get where I wanted to be. I finally got there. Once I got there, I was happy.

“I still had a 'You're not going to get me out' mentality back then,” he added. “I was just trying to get my shot, get my chance to play. Once I did, I took advantage of it.”

Nelson’s competitiveness has drove him to new heights each year.

“I feel like every time I step onto the field I have something to prove,” he said. “I feel like I have to prove to everyone else I can be a good player and I can play at the next level.”

Looking at the post-season, Nelson hopes Districts plays out in the same manner it did in basketball. Indeed, the brackets are almost identical. Nixa is the No. 1 seed and with a win Monday against Springfield Central, will face either Joplin or Republic on Tuesday. On the other side of the bracket is No. 2 Kickapoo and No. 3 Ozark.

The final is set for Thursday.

“I would love nothing more than to play Kickapoo,” Nelson said. “Hopefully, we do.”