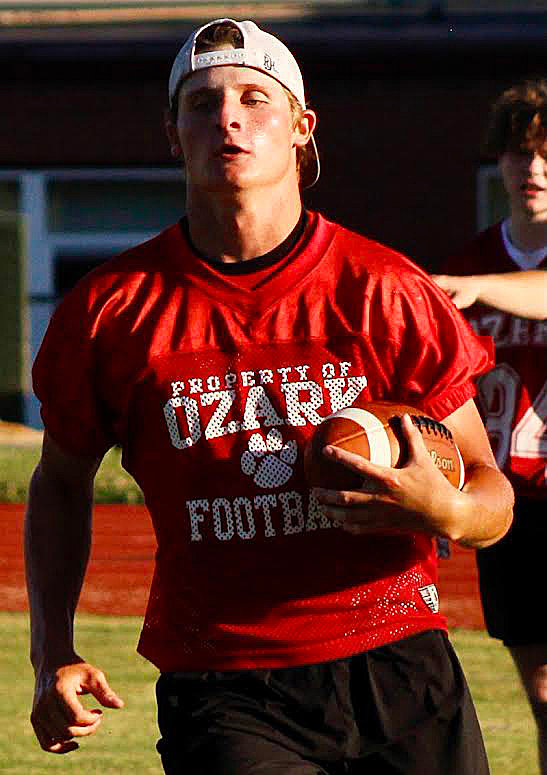 Brock Dodd has grown accustomed to receiving the same reaction from friends and family when they learn he has been following up football workouts by baling hay.

Dodd has been working on a local farm this summer late into the evenings and sometimes into the early mornings.

“We’ll usually do 500-600 bales on a normal night or sometimes 800-1000, which is a lot,” Dodd said. “We'll be out there at least until midnight, probably the latest will be 3 a.m. It can be pretty tough. Sometimes, we'll start at 6 and it's still really hot. And, you're wearing long sleeves because you don't want to get scratched up. At night, it's not too bad.

Dodd feels the work fits his mindset, as well.

“I enjoy the hard labor, blue-collar work,” he said.

Working with his hands as he has been, there’s no question Dodd has fully recovered from a broken right hand he suffered during the first day of tryouts for Ozark’s baseball team in February.

The injury all but wiped out his junior season on the ball diamond.

As Dodd makes the transition from outside linebacker to strong safety, there are no lingering effects from his broken hand, physically or mentally.

“It's not going to affect my mindset at all,” Dodd said. ‘I’m still going out there aggressive and ready to play.”

“I don't think his mindset ever changes,” Depee said. “It was an unfortunate injury. He was going 100 percent. It could have easily been just another routine play and he could have popped up and nothing would have happened. He's a young buck and is all healed up now. He loves to compete and is ready to go. He loves to mix it up. It's good to see him back in the saddle again.”

Dodd figures to be a key cog for Ozark’s defense against the run and the pass. He’s coming off a junior season in which he collected two interceptions and 40 tackles, including 20 solo stops.

“There are a few things different for him,” Depee said of Dodd’s move to strong safety. “The thing he's always been able to do is run. He's also a good athlete and a physical kid who has a nose for the ball. He also pays attention to detail. I have every bit of confidence he'll do just fine.”