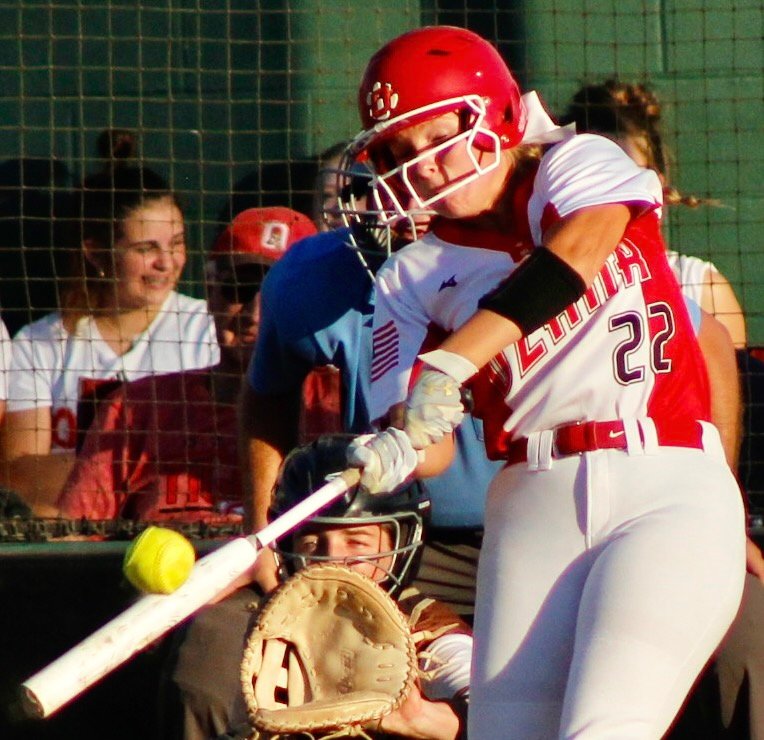 As savvy as Savannah Hughes was at-bat Wednesday, the same could not be said for the rest of Ozark's lineup.

A would-be game-winning home run by Hughes went for naught, as the Lady Tigers squandered a seventh-inning lead and fell to Kickapoo 3-2.

Hughes used player recognition to her advantage. The lone Ozark player to don a Chiefs uniform for club ball in the spring and summer, she has faced Kickapoo pitcher Allison Scott multiple times in scrimmages between the Chiefs' 18-and-under and 16-and-under teams.

Hughes broke a 1-all tie with a solo home run far over the left-field fence on a 3-2 count in the bottom of the sixth.

"I knew going in she threw to spots, inside and outside," Hughes said. "My first two at-bats (Wednesday), she came inside on me, so I was expecting she would come inside again. I was expecting an inside pitch and it was there. It felt good to see it come off the bat.

"I wish we could have pulled it out," she added. "But it was still a fun game."

Kickapoo plated a pair of runs, with the help of an Ozark error, in the top of the seventh.

Ozark countered by putting two runners on base in the bottom of the seventh, with the help of a Lady Chiefs error, but couldn't complete a comeback. Altogether, Kickapoo was guilty of four errors.

"It was a good senior moment for (Hughes). We've just got to shut the door after that," Ozark coach Jimmy Nimmo said. "You make one defensive mistake against a good team and they're usually going to make you pay for it. We did not do that in return. On the errors they made, they were able to shut us down."

The Lady Tigers struggled with runners on base all game. Besides Hughes' homer, their only other clutch hit was an RBI-single by catcher Natalie Morgan.

"Our pitch-selection was not very good," Nimmo said., "We chased a lot of balls out of the zone and got behind in the count quite a bit. We were at 0-2 a lot. That put us in trouble. We also had some 2-0 counts, but we let the next two pitches go by for strikes. We let a lot of good pitches go by. We've got to be more aggressive in those 2-0 and 2-1 counts. We've got to want to hit."

Kickapoo lead-off hitter Taylor Akers gave Ozark a glimpse of what it was like for its opponents to face former Lady Tigers lead-off hitter Abby Ford. Akers was about a one-player show for the Lady Chiefs, accounting for three hits, two runs and an RBI.

"She gets on base, she's so fast there's a good chance she's going to make it to second and third," Nimmo said.