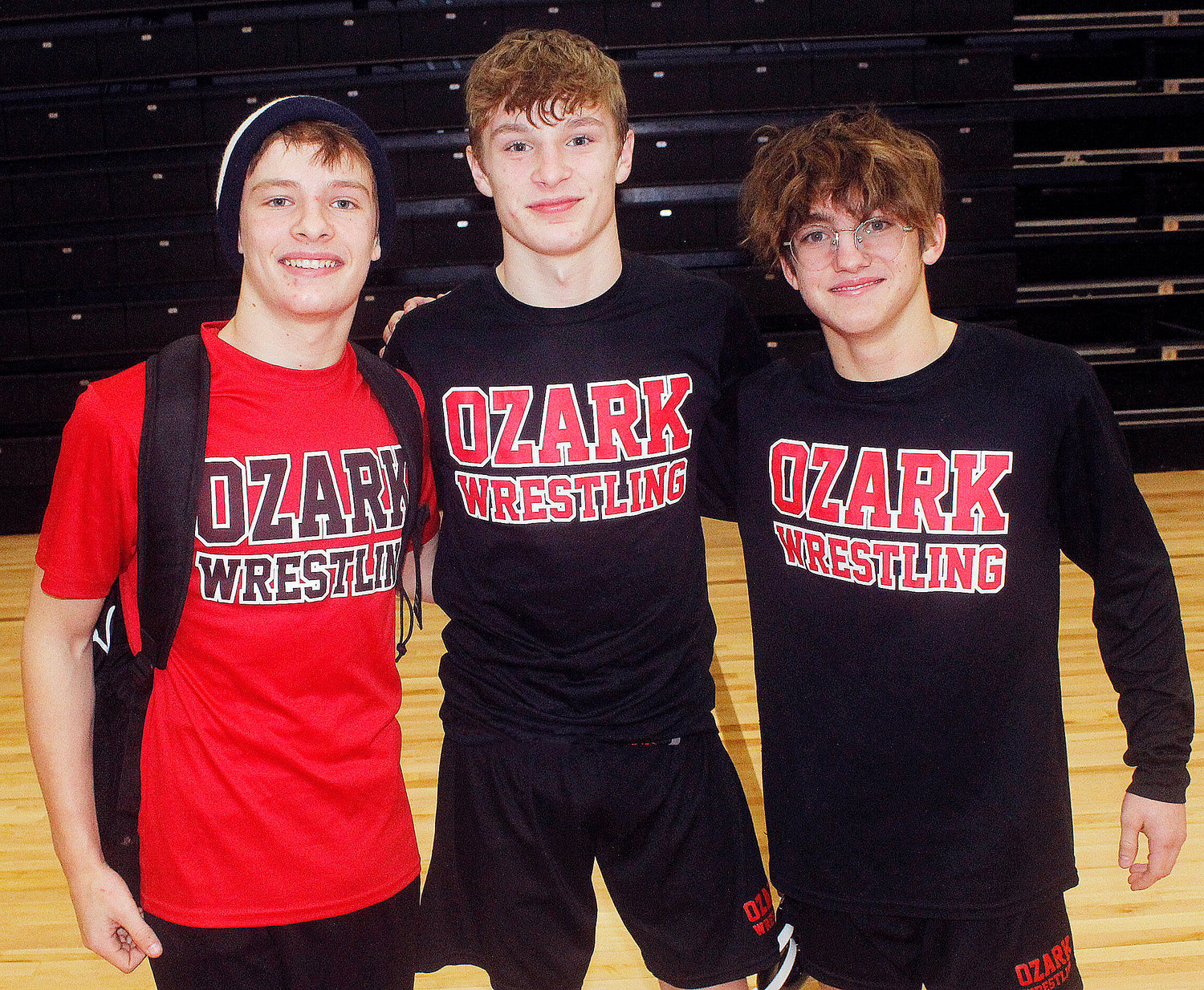 Looking back, it was the best bit of recruiting Keaton Hurst ever has done, even if what he was selling to Damien Moseley never quite materialized.

Hurst and Moseley never would have guessed the results a few winters ago when Hurst persuaded Moseley to give wrestling a try during their sixth-grade year.

“Keaton got me into wrestling by saying it would help me for football,” Moseley said. “At that time, I just played football. I ended up pursuing wrestling and quitting football. Once I joined wrestling, I had way more fun with it than football.”

Wrestling turned out to be the right fit for Hurst, Moseley and classmate Caden Harrington.

“We all formed a bond through wrestling,” Hurst said.

Fast forward to the present and the trio are Ozark freshmen who have each reached the 20-win mark and have their sights set on making a run at State berths. The Tigers travel to Neosho this weekend for the COC Tournament.

Moseley is 29-7 at 106 pounds. His highlights have been many. He claimed a championship at the Kinloch Classic, was runner-up this past weekend at the Winnetonka Tournament and finished third at the Francis Howell North Tournament and Branson Tournament.

Harrington is 27-10 at 113. He debuted by winning a championship at the Francis Howell North Tournament and followed up by taking third at the Kinloch Classic and placing fifth at the Branson Tournament.

Hurst is 21-13 at 120. He was third at both the Kinloch Classic and Branson Tournament.

Strapping on their Ozark singlets at the start of their high school careers has been everything they hoped it would be.

“We’ve wanted to be on the varsity for a long time,” Harrington said. “We’ve dreamed about it. That’s pushed us over the years to work hard enough. The varsity level has pushed us to work harder and perform well.”

“We’ve been dreaming about this since we were in youth wrestling,” Hurst said. “It’s a dream come true. We’re glad we’re helping the team and doing our part. It’s been a neat environment to see all us grow at the same time.”

“We’ve wanted to be on the varsity for a long time and are happy that we are all here now,” Moseley said.

The freshmen have appreciated the help they’ve received from veteran teammates the likes of two-time state medalist Braxton Strick.

“Becoming friends with upperclassmen has been awesome,” Harrington said. “I’ve learned a lot from them. I know if I’m hanging out with the older kids, I’m not going to be doing bad stuff.”

“We’re glad there’s been no hazing or initiation,” Hurst said. “They’ve been welcoming with open arms. They’re mentors. It’s meant everything to us.”

Over the years, it’s been a best-case scenario for the trio to be at about the same weight, making it so they haven’t had to search for practice partners.

“I know if I hadn’t been practicing with Damien and Keaton every day, I wouldn’t be near as good as I am now,” Harrington said. “They’re going to push me.”

“We mix around, but always practice against each other,” Hurst said. “It’s always fun to compete with your buddy.

“Me and Caden weren’t practice partners at the beginning of this year because we wanted to try something new,” Moseley said. “But right now we’ve been partners every day. We push each other a lot.”

Tigers coach Tod Sundlie reports the freshmen have gone through customary growing pains and are progressing.

“Freshmen sometimes get distracted and forget the style they’ve been trained to wrestle,” Sundlie said. “But you don’t question their toughness. I’m looking forward to when they get out of their freshman phase. They can be tough wrestlers.

“They’ve fit in for what we needed are certainly having solid seasons,” he added. “I’m hoping they can turn the corner here at the end.”

Mosley’s goal is to be Ozark’s first freshman medalist at State since Strick was fifth two years ago.

“I would like to do more than make it to State,” he said. “I’d like to place pretty high.”