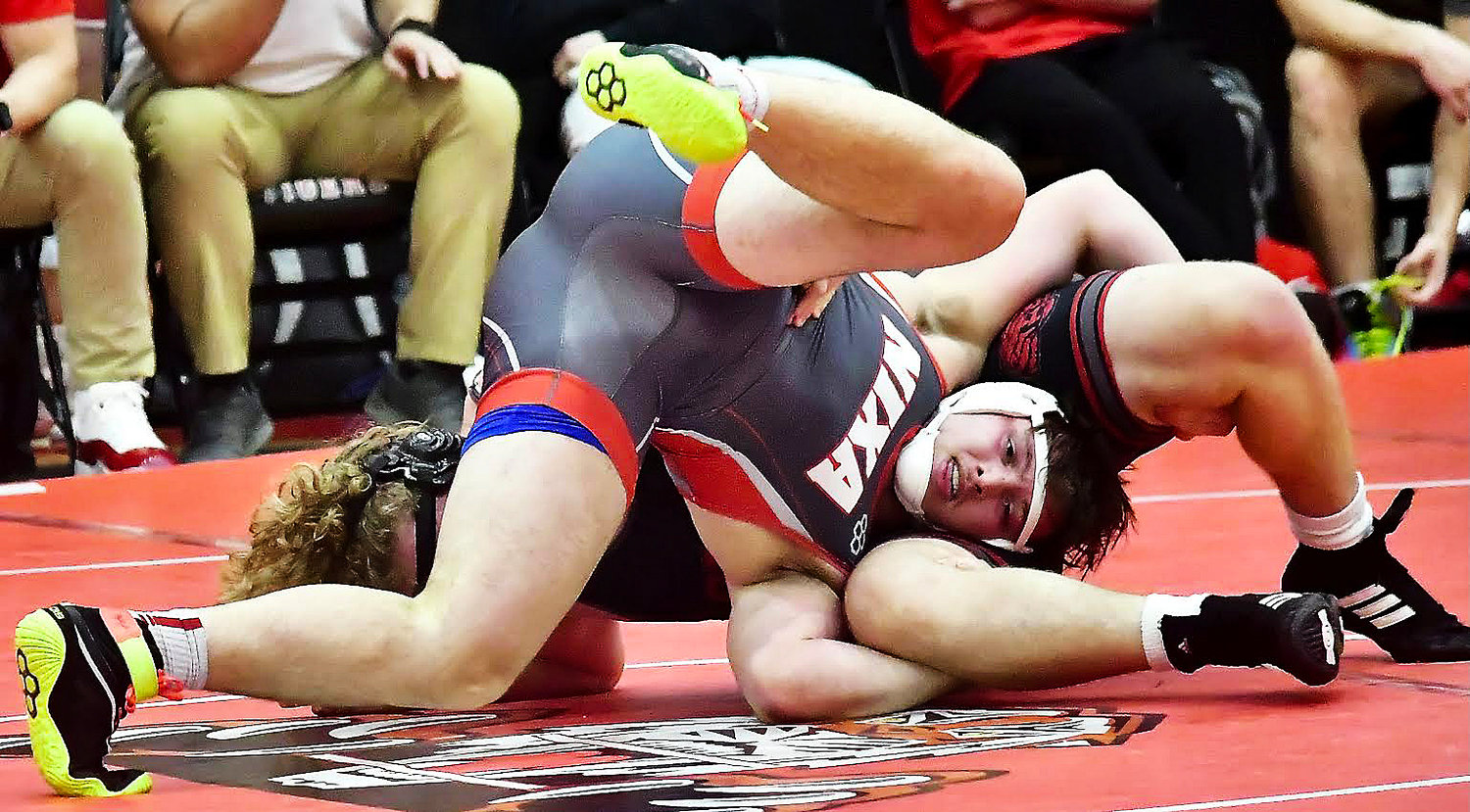 Not a whole lot of people knew about the torn labrum. The people close to me knew. But other than that, it wasn't going to be an excuse for me to lose any matches.”
Nixa 215-pound junior Brennan Carey
PAT DAILEY Sports Editor patd@ccheadliner.com

The prevailing guess work outside of Brennan Carey's inner circle of family and friends was his absence from Nixa's football team last fall had to do with him devoting his full attention to wrestling.

Wrestling indeed had much do with Carey not strapping on shoulder pads for the first time. But if there hadn't been an ominous cloud about his health hovering over him, he likely would have lined up at defensive end as a junior, just as he had as a sophomore for the Eagles.

With an eye on his future on the mat, Carey did not play football and instead chose to undergo surgery for a torn labrum in his right shoulder.

Carey competed for three years with the labrum injury.

Even more remarkable, the torn labrum didn't keep him from capturing a 16U 195-pound Greco-Roman championship at the United States Marine Corps Junior Nationals in Fargo, North Dakota, last July.

Also, he placed third at 195 at the Class 4 State Tournament last March.

Carey's injury dated all the way back to his eighth-grade year at Carl Junction.

"A buddy of mine went for a lat-drop and I defended it. My shoulder ended up landing on the mat straight-forward and it dislocated," said Carey, who transferred to Nixa prior to his sophomore year. "I had an MRI and a couple X-rays done. I was told surgery wasn't the best answer, that I could do physical therapy for a while.

"I went through three rounds of physical therapy, trying to get it strengthened," he added. "It was rough getting through it. I'd been wearing a brace for the shoulder on and off. I had a lot of (instances) where it would dislocate on its own."

All the while, Carey was determined to be quiet about his injury.

"Not a whole lot of people knew about the torn labrum," he said. "The people close to me knew. But other than that, it wasn't going to be an excuse for me to lose any matches."

Upon Carey's return from Fargo, he and his family felt the time was right for him to undergo surgery.

"We felt like that was the best window of time," he said. "Since I pretty much wrestle year-round, after freestyle and greco season is over is pretty much the only time I have (off). So, I finally ended up having surgery to get it fixed and done with."

Carey completed rehab in time to be ready for Nixa's season-opening dual. He picked up where he left off.

Carey currently owns a 24-5 record after making the jump to 215. He's fresh from a championship at the Wildwood Invitational and has won 17 straight going into this weekend's Winnetonka Tournament.

"I came into this season with a sense of urgency to have the same success," Carey said. "I feel really good, a whole lot better. (The shoulder) feels better than it has in three years. A lot of times in the past I'd have to hold back on what moves I hit and with my shots. I'd get a little defensive (from being) nervous about it coming out in the middle of a match."

Looking ahead, Carey could receive a tough challenge from Branson's Cade Grimm (30-1) at the COC Tournament next weekend in Webb City.

As for Districts and State, Carey has yet to lose to an opponent who he might see in the post-season. His losses have either been to 215'ers in Class 3 or out-of-state opponents.

Carey's niche is greco and he has his sights set high on wrestling that style at a higher stage this coming summer.

"It's up in the air whether I play football (next season) or not," he said. "I'm working on going to a lot more freestyle greco (tournaments). I'm hoping to make the World Team this year."