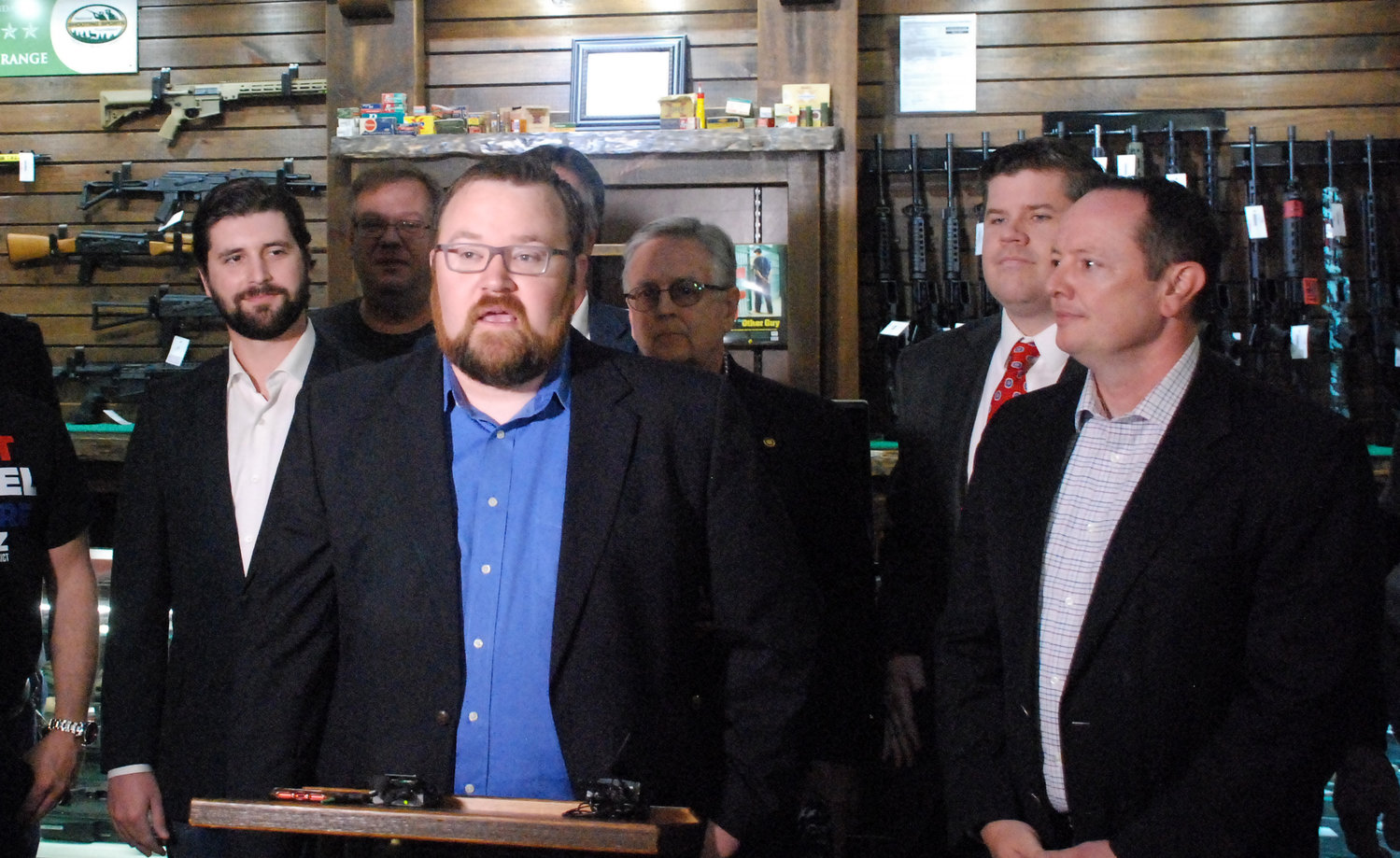 CHRISTIAN COUNTY LAWMAKERS played a key role in the passage of the Second Amendment Protection Act, or SAPA in the Missouri General Assembly in 2021. Pictured, from left, State Rep. Jered Taylor, R-Republic and State Sen. Eric Burlison, R-Battlefield, surrounded by other state lawmakers and SAPA supporters at a press conference at Sound of Freedom USA indoor gun range in Ozark on May 17, 2021.
RANCE BURGER/Headliner News
Posted Thursday, September 2, 2021 8:25 am
RANCE BURGER ranceb@ccheadliner.com

A Cole County judge issued in favor of the Missouri government and denied a challenge to a law known as the Second Amendment Preservation Act that has strong ties to Christian County.

House Bill 85, or the Second Amendment Preservation Act (SAPA), was signed into law by Gov. Mike Parson on June 14.

On Aug. 18, the U.S. Justice Department filed a statement of interest in a lawsuit that says SAPA should be declared unconstitutional, and that the court should issue an injunction barring the law from being enforced in Missouri.

By law, a judge may not issue an order of declaratory relief unless there is an absence of a remedy at law. The plaintiffs cited two other pending lawsuits, but did not bring forward any adequate remedy of law that would allow for a judgement in their favor.

"(I)f plaintiffs have an adequate remedy at law, then the court cannot issue declaratory relief," Green wrote in the ruling. "Plaintiffs directed this court to at least two pending cases filed against them under this statute, however, '[W]here [the] alternative remedy is a pending suit, there is even greater justification to apply the rule against allowing declaratory judgement actions.'"

Attorney General Schmitt released a statement shortly after the denial ruling on Aug. 27.

SAPA declares laws, rules, orders or other actions by the federal government to restrict or prohibit the manufacturing, ownership or use of firearms in Missouri that "exceed the powers granted to the federal government except to the extent they are necessary." The U.S. Justice Department challenged that it should be nullified. As reported by Sarah N. Lynch from Reuters, the Justice Department filing reads, in part, "HB85 is legally invalid. Under the United States Constitution’s Supremacy Clause, the State of Missouri has no power to nullify federal laws."

In an accompanying sworn statement, Alcohol, Tobacco, Firearms and Explosives Special Agent in Charge Frederic Winston said the new law "has already had a significant impact on ATF's partnerships with state and local law enforcement offices," according to the Reuters report. Winston noted that 12 of 53 state and local law enforcement offices have withdrawn from participation in ATF task forces since the law's enactment.

Legislators who represent Christian County worked to get House Bill 85 passed into law in the 2021 session of the Missouri General Assembly. State Sen. Eric Burlison, R-Battlefield, and State Rep. Jered Taylor, R-Republic, were the bill sponsors in their respective chambers of the legislature. They held a joint press conference with other Republican lawmakers to celebrate the bill's passage on May 17, at Sound of Freedom Indoor Gun Range in Ozark.

"The U.S. Department of Justice may be fine with taking firearms away from law-abiding citizens without due process, but that is a bridge too far in Missouri and state resources will not be used for that unconstitutional task," Burlison and Taylor said in a joint statement issued June 22.

Burlison said the bill protects Missouri gun owners from any potential reach by the federal government into their gun cabinets and safes.

"We have an administration, we have a president who is hostile to the values that we hold dear in southwest Missouri, to the values of the Second Amendment," Burlison said at the press briefing May 17.

Burlison used the word "hostile" twice in describing President Biden and/or the executive branch of the federal government.

"The states ratify the Constitution, and so therefore the federal government cannot infringe on our Second Amendment rights. It's reminding them about their place," Burlison said.

In their statement from June 22, Burlison and Taylor expressed confidence that SAPA could withstand any legal challenges.

"From the 1842 court decision of Prigg vs. Pennsylvania, to Printz vs. the United States, and most recently, NFIB vs. Sebelius, the courts have consistently ruled that there is a prohibition of federal usurpation, or "commandeering" of state resources," Burlison and Taylor wrote. "Law enforcement agencies cannot be forced into doing the work of the federal government, especially when such work is unconstitutional in the hearts and minds of many Missourians."

Burlison said that some of the legal research leading up to House Bill 85's passage in 2021 dated back to about a decade before the bill's adoption.

"The core message of the Supremacy Clause is simple: the Constitution and federal laws (of the types listed in the first part of the Clause) take priority over any conflicting rules of state law," Nelson and Roosevelt write.

That doesn't mean the Supremacy Clause is unchallenged.

"Every year, courts decide an enormous number of cases that involve whether a particular federal statute should be understood to preempt a particular aspect of state law. Often, the key disputes in these cases boil down to questions of statutory interpretation," Nelson and Roosevelt write.

The National Constitution Center is supported by the largely conservative Federalist Society, the more progressive American Constitution Society and by the College Board. Its creation was funded through a grant from the John Templeton Foundation.