No longer a novice, Ozark's Haymes reaping rewards of her morning, afternoon work 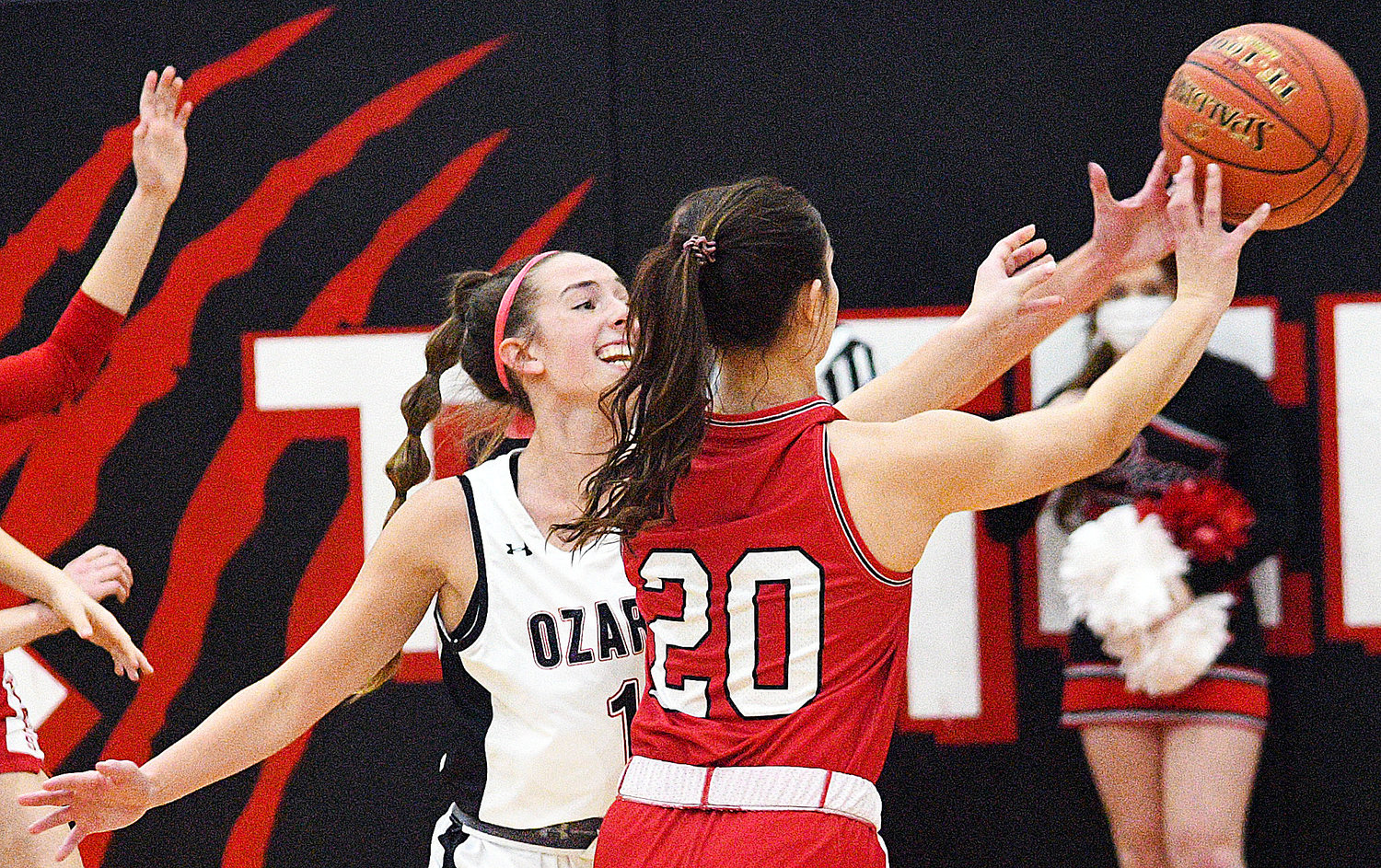 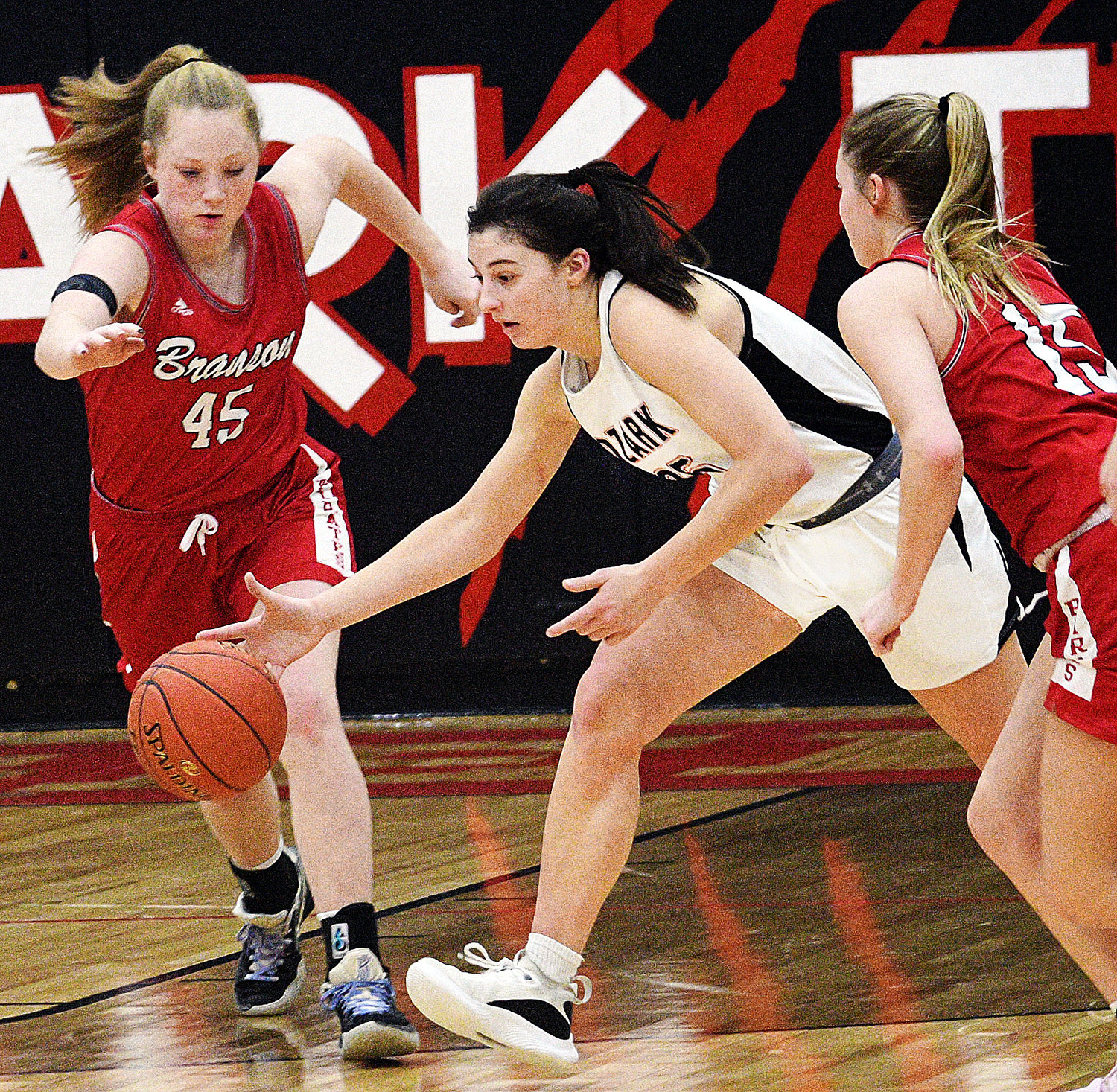 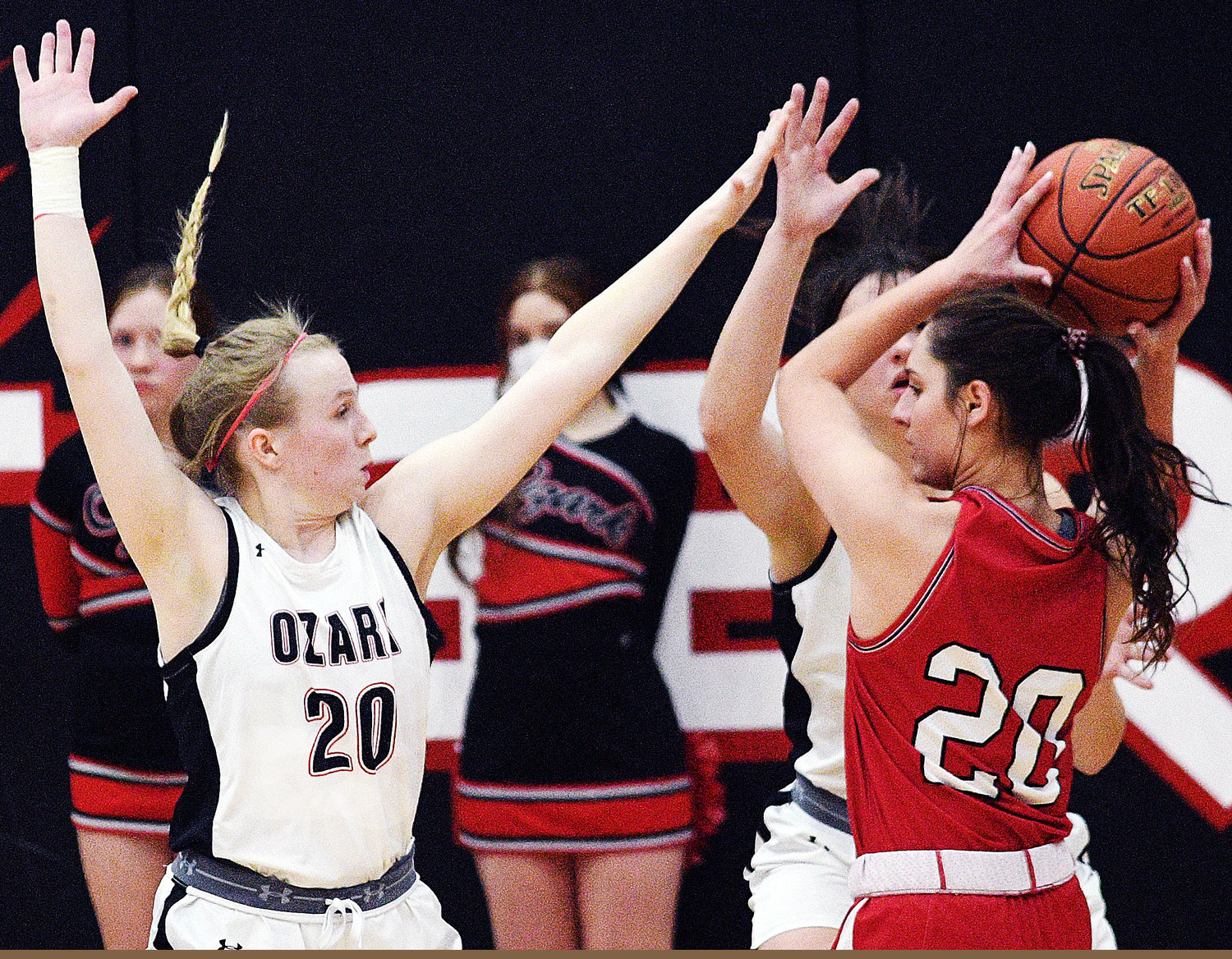 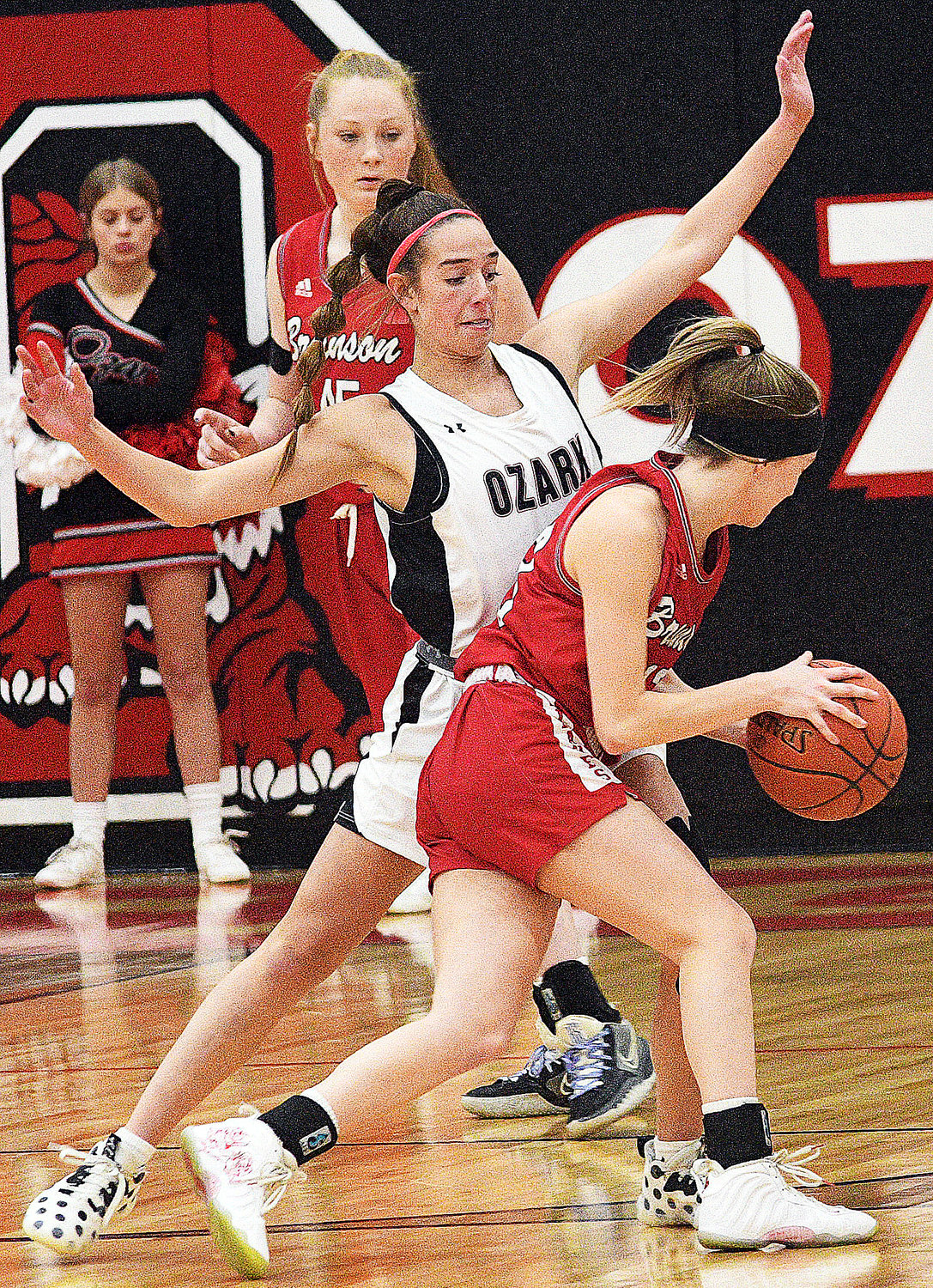 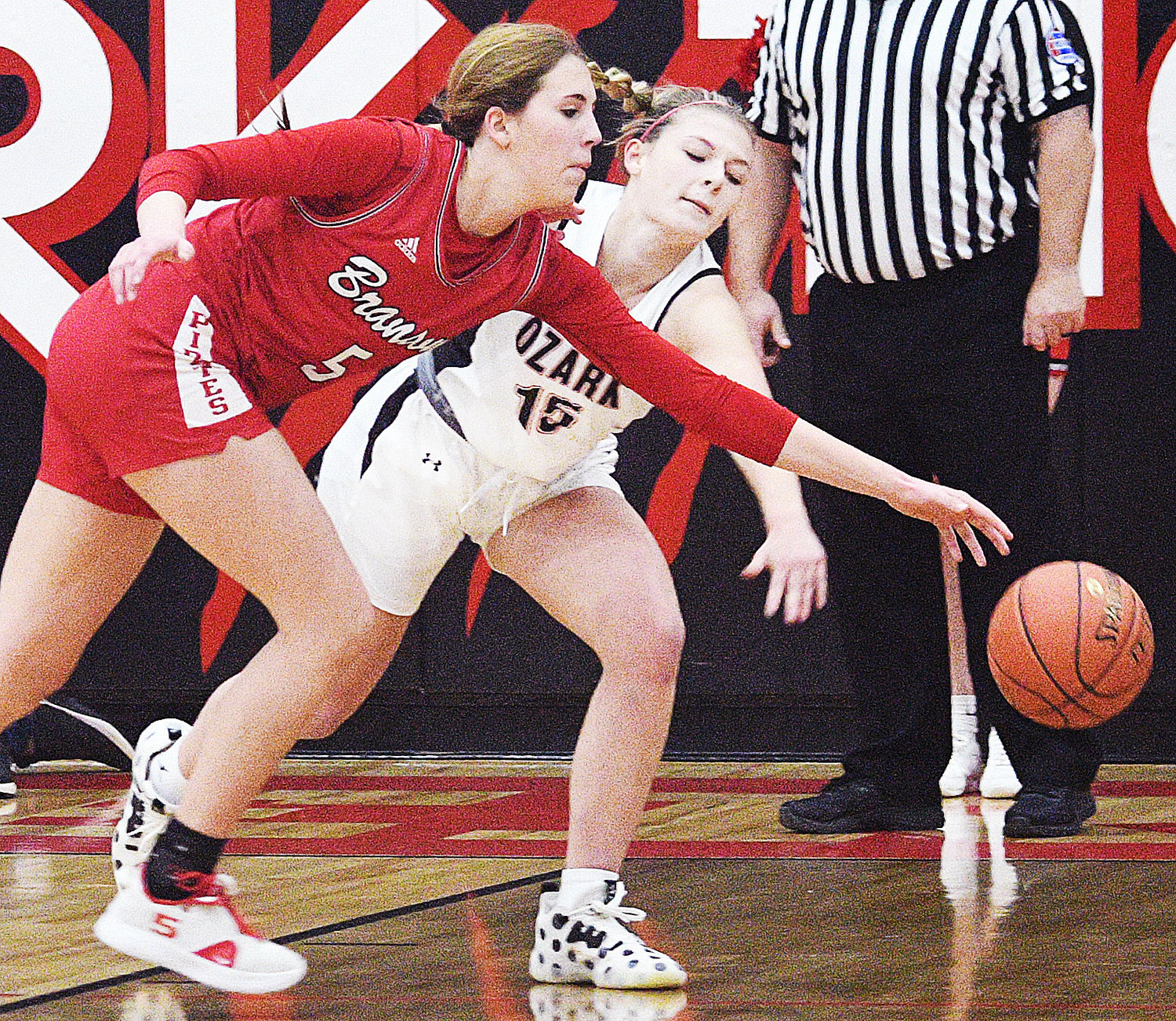 OZARK’S LYLA WATSON and a Branson player both reach for a loose ball.
PAT DAILEY/Headliner News 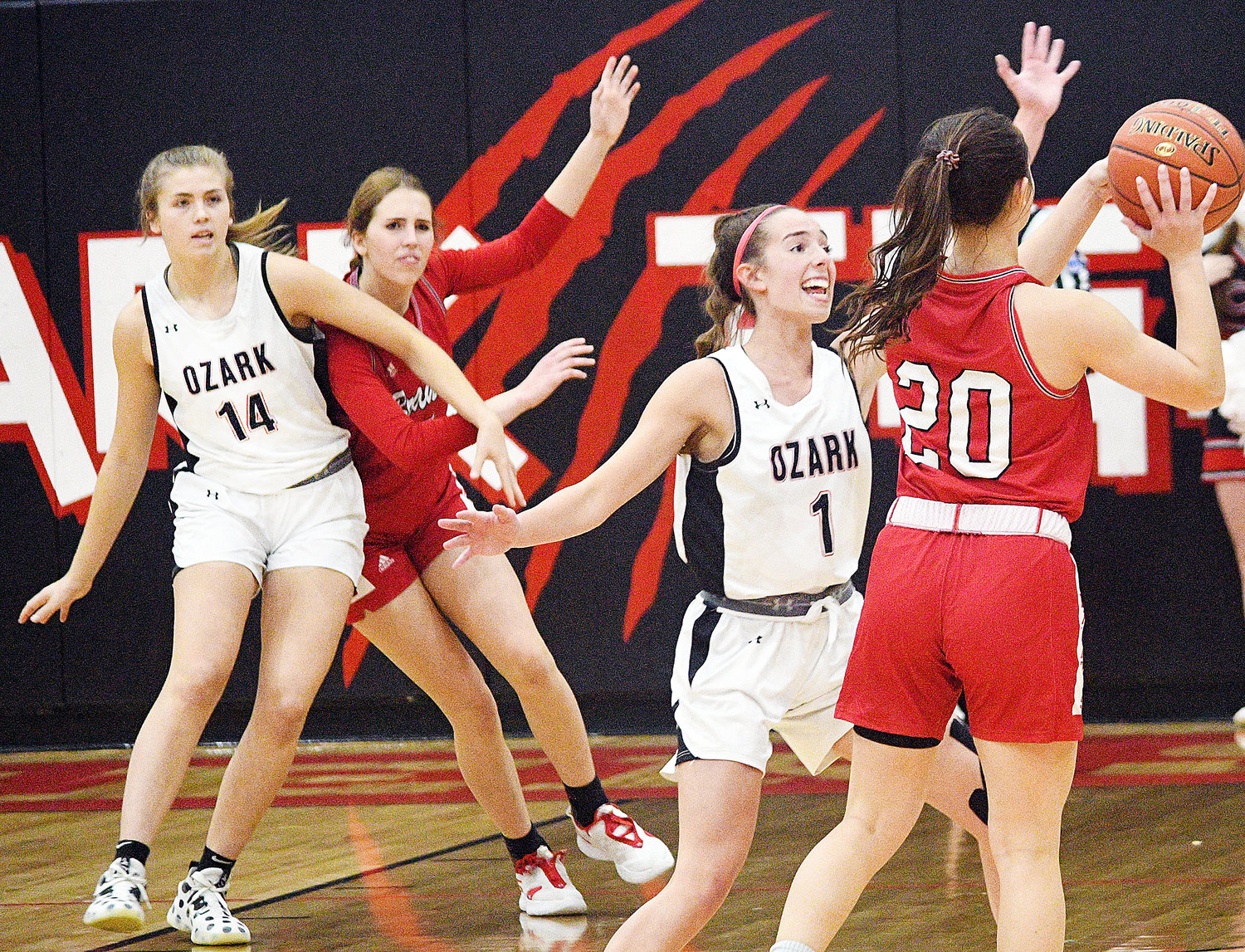 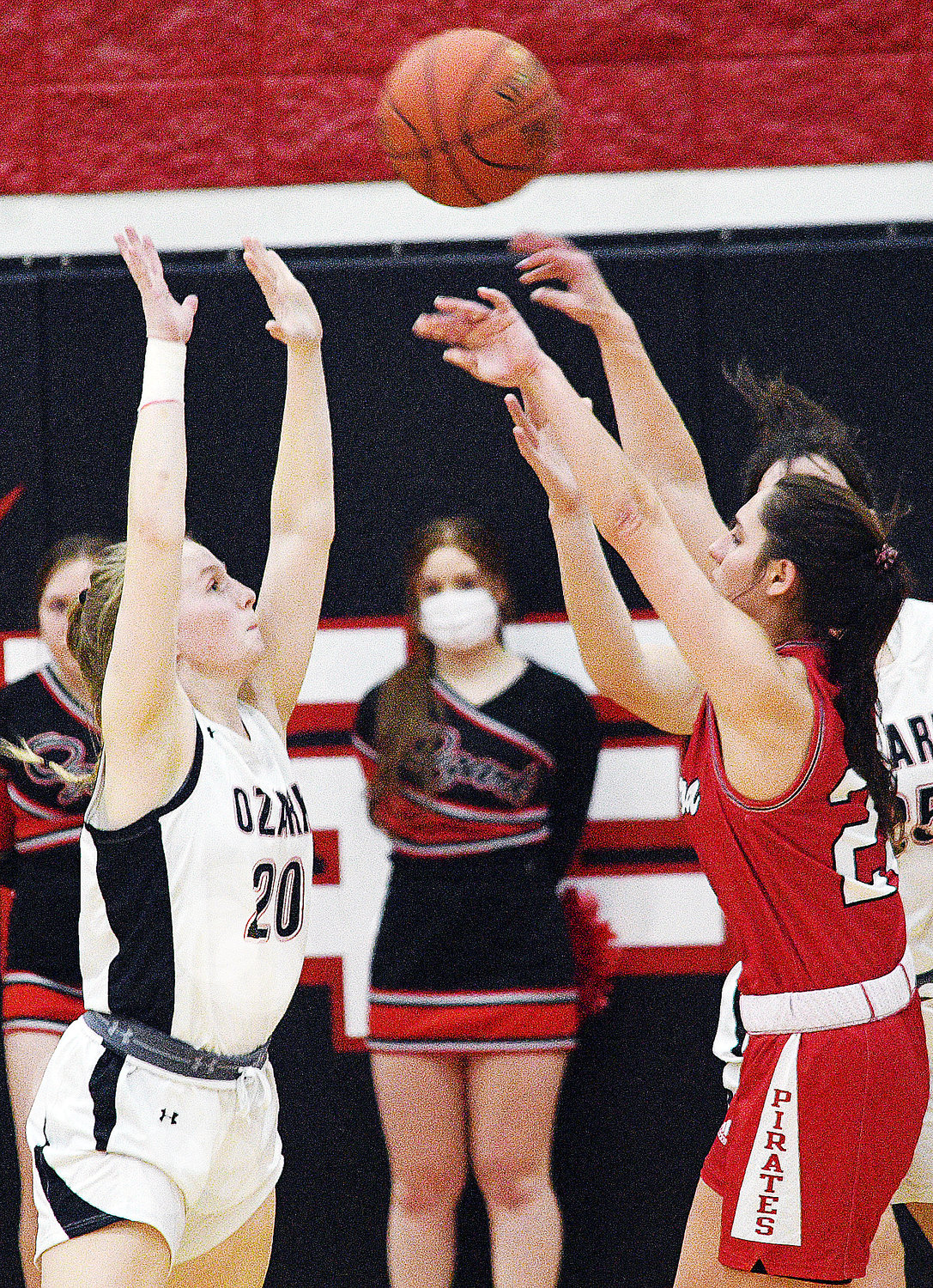 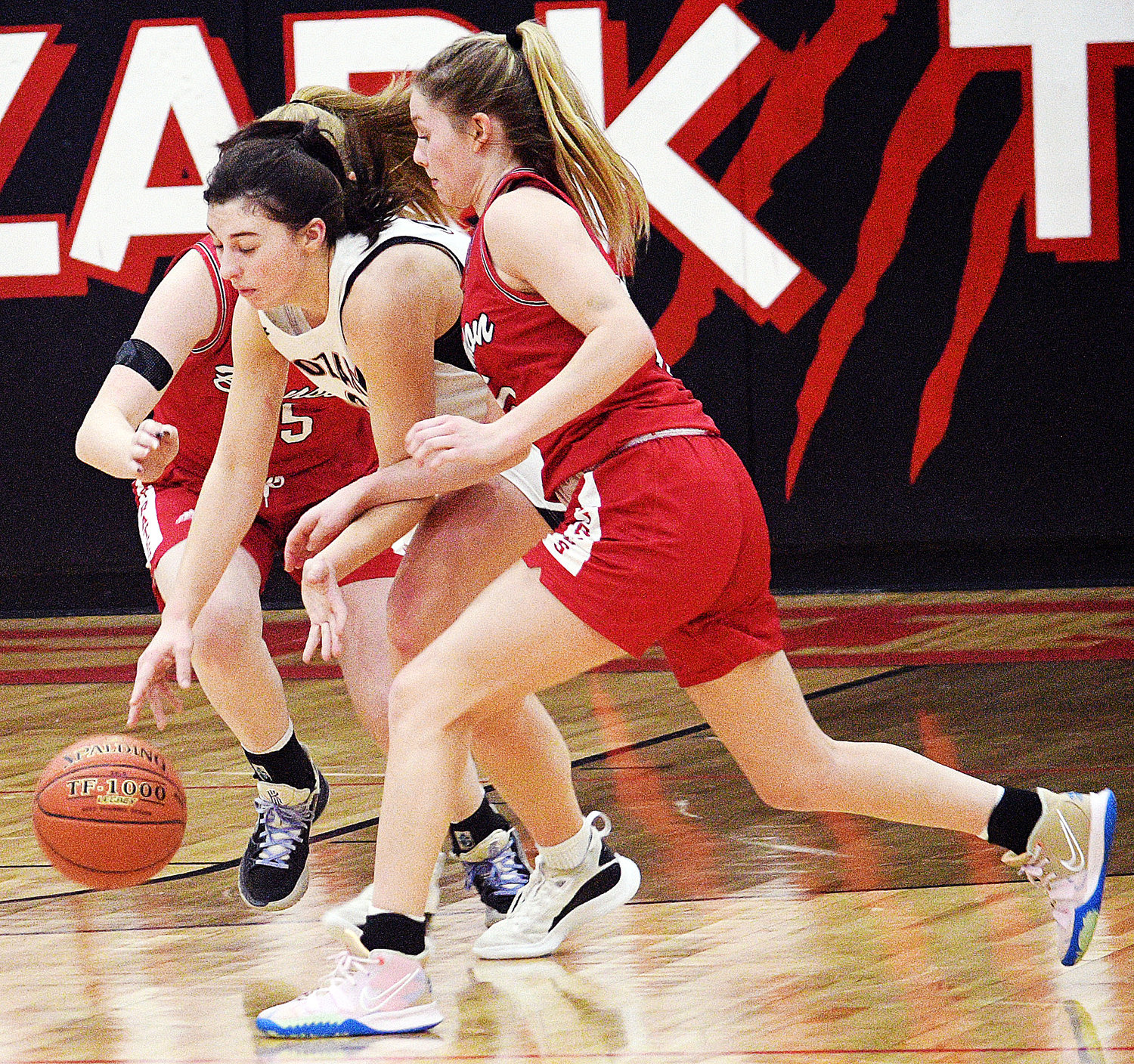 A Cross-fit enthusiast, Haven Haymes continues to make a crossover from soccer to basketball that has culminated in back-to-back career-high scoring games for the Ozark center.

Haymes led Ozark with 13 points Monday in the Lady Tigers’ 56-30 COC-opening blowout of Branson. She had eight points in the second quarter alone.

That production came on the heels of her scoring 11 points against Lebanon over the weekend.

All this from a junior who didn’t shoot hoops until she was in the seventh grade.

“I play soccer, but all my friends played basketball. In the seventh grade, they said, “Haven, you’re almost 6-foot tall, you need to play basketball,’” Haymes said. “One day, I went to tryouts, made the team and it started from there.

“At first, I learned all the skills and tried to absorb it all,” she added. “Now, it’s to the point that I’ve built up enough confidence to go out and play hard and try to play my best. I don’t think anymore about where I started. Instead, I think of how far I have come.”

“Oh my goodness, she’s come a long ways,” Lady Tigers coach Doug Hepler said. “She’s settling in, understanding her role and is getting more and more confident. The last two games she has played tremendous.

“I’m proud of her,” he added. “She puts a lot of effort in at practice to get better. She understands the value of hard work. This is the result of hard work. She’s very athletic and strong — work hard and good things happen.”

Even with basketball practices taking place after school, Haymes gets her Cross-fit workout in prior to school daily at Lift Gym in Nixa. She started to compete in Cross-fit competitions last fall.

“It’s something my family has done and I fell in love with,” Haymes said. “When I was little, I never really felt like I was strong. After my Dad started doing cross-fit, I thought, ‘I want to get some meat on my bones and build up my strength.’ It’s paid off in sports.”

Haymes doesn’t necessarily feel she has to be disciplined to do her Cross-fit exercises in the morning.

“I’ve fallen in love with it so much that I want to spend as much time as I can doing it,” she said. “I love any type of burpee. I’m a burpee girl. I also like to do cleans and the snatch. They’re like my family (at Lift Gym). They support me there in everything I do.”

Haymes and fellow center KeAnna Rivera gave Ozark a presence in the paint, while overpowering Branson. Rivera had eight points.

Ozark (7-4) kept Branson close throughout the first half by committing 23 fouls. The Lady Pirates finished with more than twice as many free throws as field goals. They had only seven field goals and were 15-of-23 on free throws.

“It was two teams who found a way to ‘ugly up’ the game a little bit,” Hepler said. “Zone defenses are going to do that to you. There were also a lot of lazy fouls, the girls not moving their feet real well.”

The Lady Tigers’ perimeter shooters got on track in the second half. Lyla Watson and Jordyn Foley both had two treys and Riley Boggs added one.

Foley is improving enough that she could be a big boost for Ozark.

“She has such a smooth shot and is so even keel,” Hepler said. “I love her potential. I have to light a fire under her sometimes and say, ‘Hey, is there any emotion underneath there?’ She just doesn’t show it. She plays within herself.”

Branson (6-5) posted four points in both the first and third quarters and six in the fourth quarter.

“She got her points, but I think we frustrated her enough that her percentages weren’t great,” Hepler said. “We kept her out of good scoring opportunities. We turned her over some and frustrated her.

“We’re doing a good job defensively,” he added. “The more we get comfortable with our roles and responsibilities, the stronger we get.”