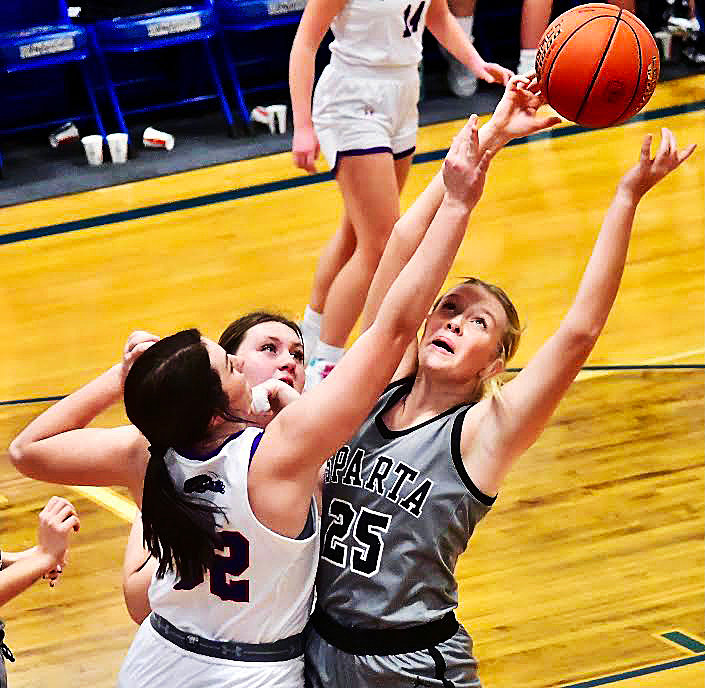 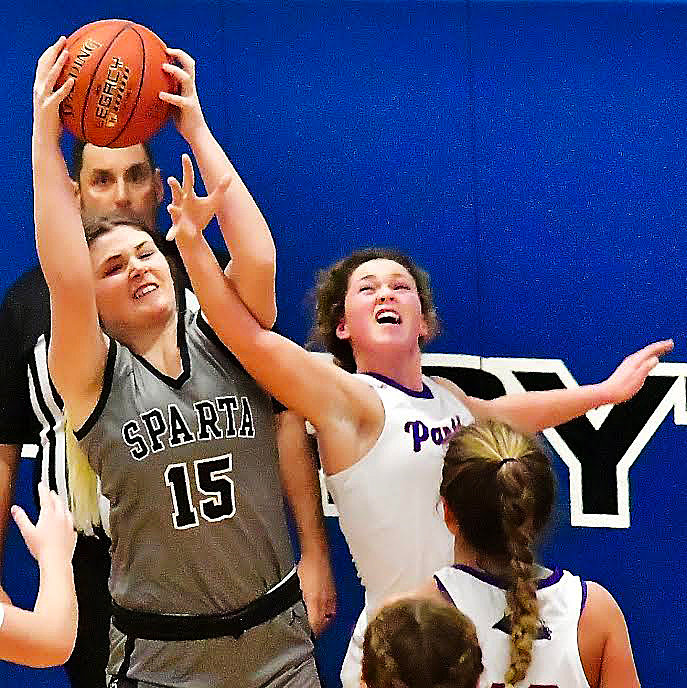 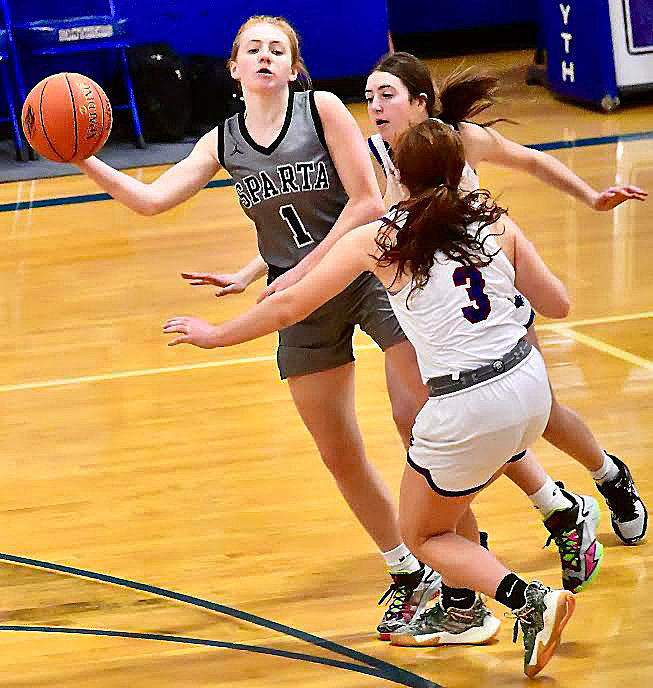 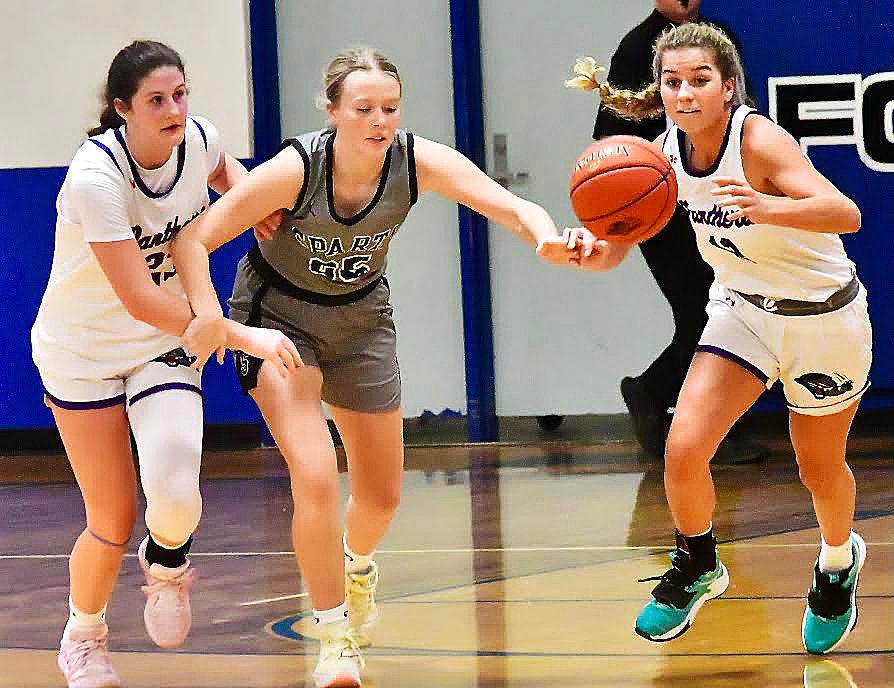 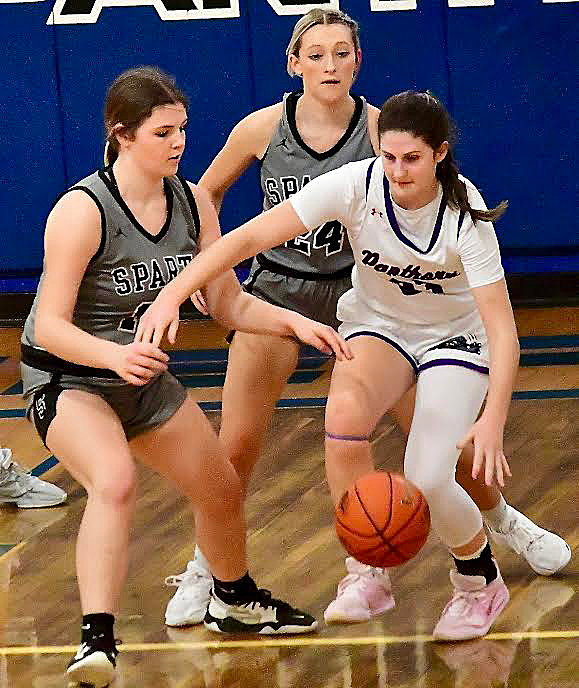 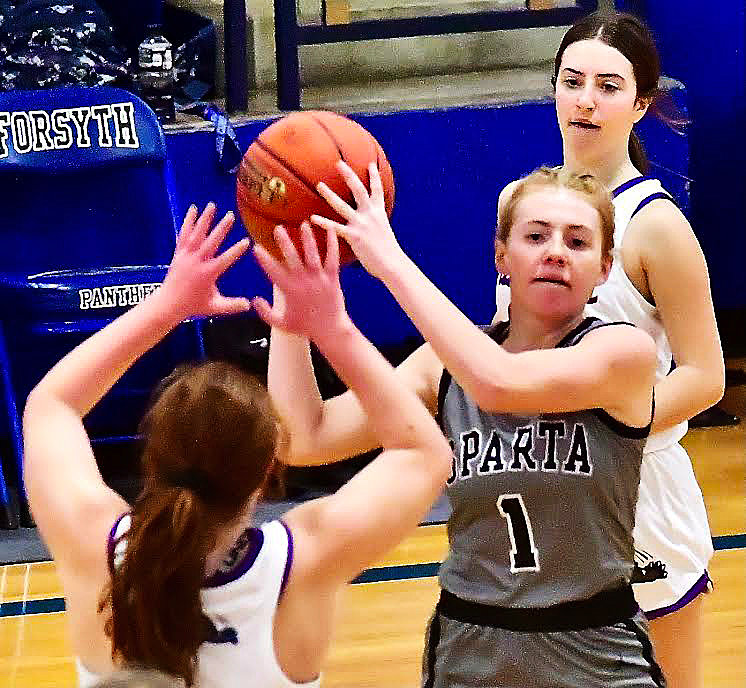 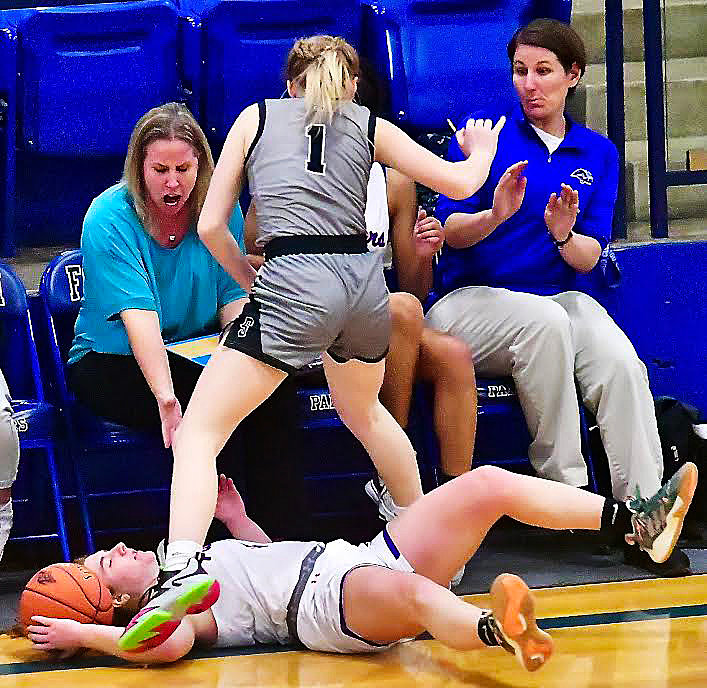 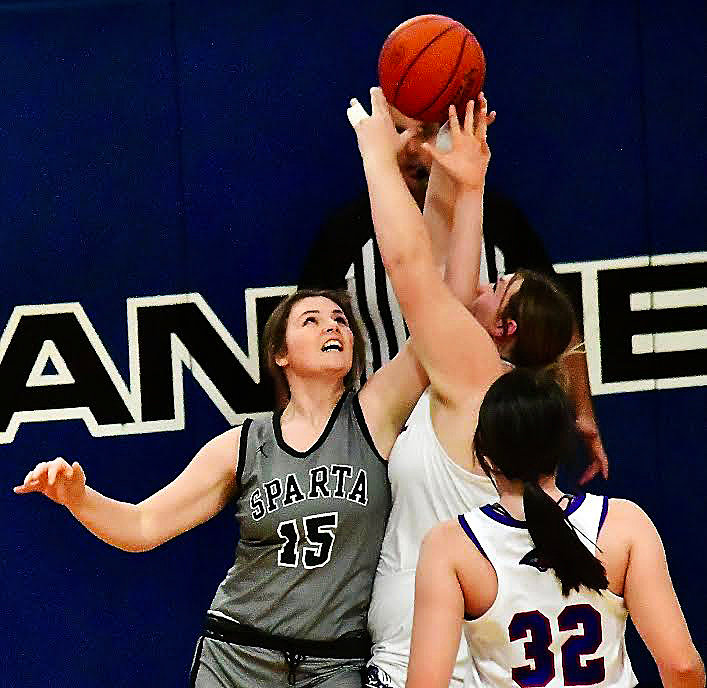 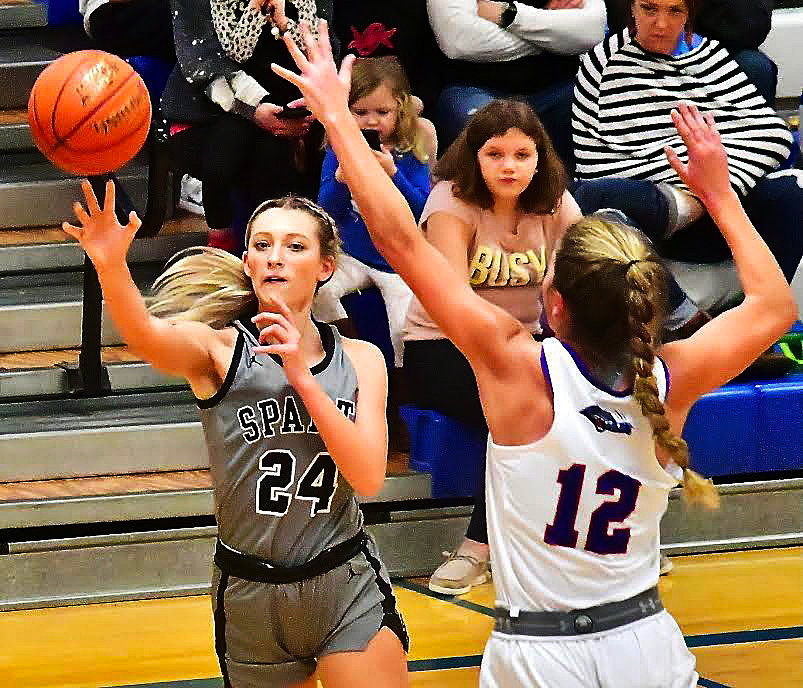 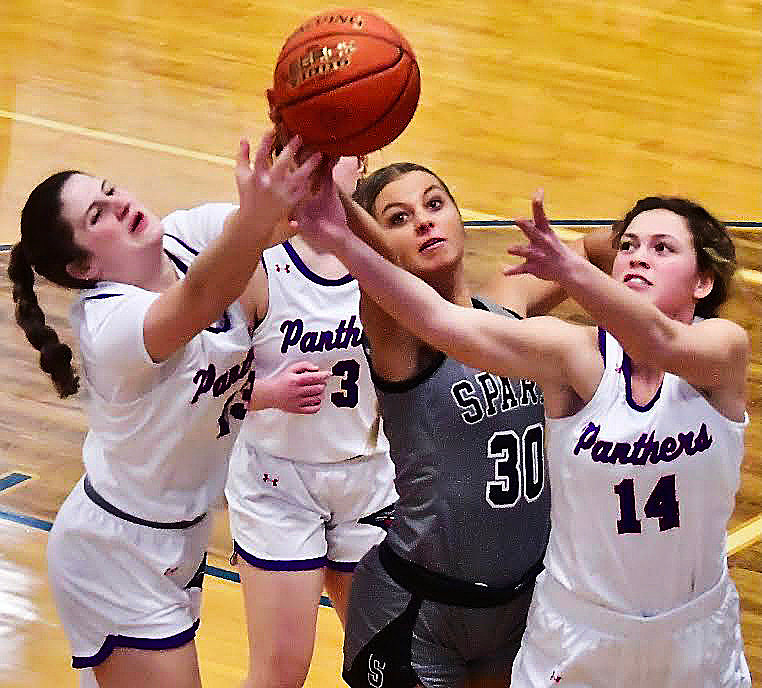 SPARTA'S BRYNN HOLT battles for a board.
PAT DAILEY/HEADLINER NEWS 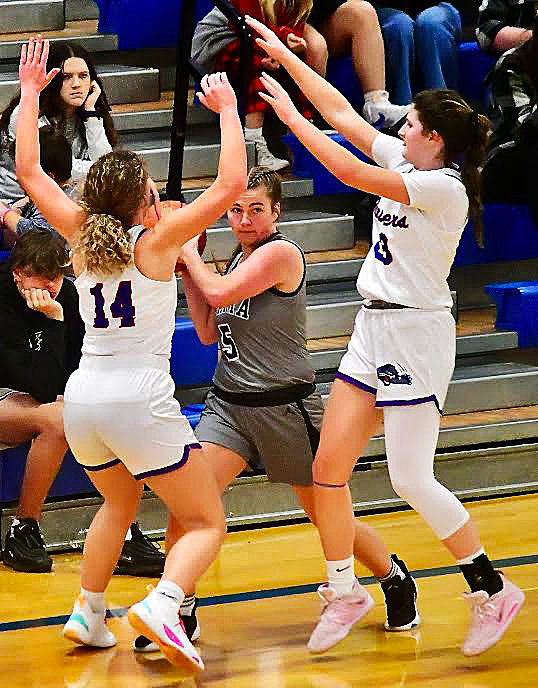 FORSYTH — Natalie Wilks and her Sparta teammates gained revenge and redemption, but not necessarily in that order from their perspective, by downing Forsyth 64-43 in the teams’ much-anticipated rematch Friday.

The Lady Trojans’ win came only six nights after Forsyth upset the hosts in the Sparta Tournament championship game.

“It was more about redemption,” Wilks said. “In the tournament game, we didn’t play our best and we all contributed to the loss. We let it slip away. It was a hard loss. We were mad at ourselves.

“Coming in here tonight, I knew we could do it,” she added. “I had confidence in us.”

The quickness and ease at which Sparta broke away from Forsyth and won the rematch made the outcome of their first meeting even more stunning.

The games bore no resemblance to each other at all.

Sparta’s full-court press last weekend forced Forsyth to commit 36 turnovers. But the frantic pace also factored in the Lady Panthers closing out regulation with a 15-2 run.

The second time around, Sparta never even flashed a hint of full-court pressure. It was a tribute to the respect Lady Trojans coach Josh Loveland has for Forsyth guard Savannah Koen.

“I felt a lot of their offense (in the first meeting) came from our press,” Loveland said. “Koen did a good job getting to the middle of the floor, drawing defenders and dumping it down. Tonight, I felt if we slowed them down, we would be able to keep ourselves between (Koen) and the basket.

"I thought our game plan was pretty good,” he added. “Our half-court defense was solid and it took them out of their offense that they were successful in last time. Sometimes, we miss rotations, get out of position or just get lazy on the back side of our press and give people easy ones. In a half-court (game), I feel like we hardly ever give up easy buckets. We’ll try to pick and choose when to press and when to back off. Tonight, I felt the right choice was to back off.”

It made for quite a change for Sparta (12-3). The Lady Trojans have done everything they can to force an up-tempo in recent seasons.

“I kept running up trying to press,” Wilks said with a laugh. “It was weird (not to press). But I think it helped that we didn’t.”

“We still like to go out and press,” forward Megan Brown said. “But it’s nice to know we can fall back to a half-court.”

The teams’ games featured starts that were a complete contrast. Forsyth jumped out to an 11-0 lead last weekend. Sparta streaked to leads of 9-0, 19-2 and 27-5 Friday.

“I’m pretty pleased with tonight, especially with the start,” Loveland said. “Over and over this season we have had slow starts. Tonight, we came out swinging.”

Wilks and guard Mya Fulton teamed to make it 34-11 Sparta at halftime. Fulton stole a Forsyth in-bounds pass with :03 remaining and passed to Wilks for a layup at the buzzer.

Wilks scored 13 of her 16 points in the first half. Brown helped finish off Forsyth by netting 14 of her 18 points in the second half. Center Amree Youngmon added a dozen points.

Like Wilks, Brown felt the rematch was more about redemption. She was happy she and her teammates didn’t have to wait long to vindicate themselves.

“We all left (the tournament final) pretty ticked off,” Brown said. “It was a quick turnaround and we were all fired up tonight. We wanted to do everything we could to make sure we didn’t feel that way again.

“We wanted to make sure everybody was doing their jobs and we came together with the same mindset,” she added. "We were going to come out and win this thing together.”

The Lady Trojans feel a team meeting last Monday has led them to being a more unified bunch.

“We had internal things going on,” Loveland said. “We kind of cleared the air. It made us a little more comfortable.”

Sparta opens the Rogersville Tournament with Webb City at 6 p.m. Tuesday. The Lady Cardinals have won six games in a row. Rolla and Springfield Central are also on the same side of the bracket as the Lady Trojans.